Liberal and Labor Party submissions to this year’s Electoral Districts Boundaries Commission have been published, effectively firing the starter’s pistol on the fight for office at the 2022 election – with many stakeholders considering favourable boundaries to be the key to electoral success in SA.

A mandated four-yearly review regularly redraws the electoral map, but this year’s commission is likely to be a watershed one, after the controversial “fairness clause” that was to govern its deliberations was removed from the state’s constitution act in the dying days of the previous parliament.

The clause held that the commission should try to ensure that a party that wins a statewide majority should also win enough seats to form government – a provision that prompted a radical redraw before the 2018 poll, with 398,710 voters shifted into different seats – compared to just 89,000 four years earlier.

Labor has long argued that a different section of the act should be given precedence – highlighting the “principle that the number of electors in each electoral district must not vary from the electoral quota by more than the permissible [10 per cent] tolerance” – a principle it now argues is the “tier one” consideration of the re-draw.

“With the benefit of data that has become available after the 2016 Commission completed its work, and the passage of time, it can be seen that the boundaries the 2016 Commission drew to achieve the [fairness] requirement unexpectedly resulted in there being electorates which, as at the date of the 2018 election, were not within the 10 per cent tolerance and, further, there are additional electorates now outside the permissible tolerance… [further] whilst the changes to the boundaries had broadly the effect intended from the perspective of improving the capacity of the Liberal Party to form government, in the result, the electoral districts might now be seen as exacerbating and perpetuating a different problem – namely, a structural imbalance in favour of the Liberal Party over the ALP – and in favour of regional electorates over metropolitan electorates.”

“In the ALP’s respectful submission, this is a serious problem that ought not be allowed to stand… it is a return to malapportionment,” the submission states.

“By the 2022 election, the current boundaries will produce an unacceptable disparity which would grow over the course of the Parliament to be elected. This is particularly so when the legislative imperative that has driven the disparity [the Fairness clause] has been repealed.”

Labor “respectfully” argues that “if the Commission were to adopt the boundaries set by the 2016 commission as presumptively appropriate, it would risk entrenching a disparity”.

Labor argues that on the current boundaries the ALP could win 50.1 per cent of the statewide vote but it would only translate into 22 seats – effectively the same problem the Liberals have long encountered in SA.

“Moreover, [if Labor won] 52.4 per cent of the 2PP statewide vote, it would end up with only 23 seats on its side of the pendulum and would be unable to form government,” the submission argues.

The ALP challenged the final distribution of the previous commission in the Supreme Court, but its argument was rejected.

It now argues that compliance with the 10 per cent tolerance, according to the electoral roll as of February this year, “will require substantial alterations to the electoral district boundaries”.

“Some nine of the 47 electoral districts have elector numbers that are now outside, or only marginally inside, the plus or minus 10 per cent tolerance permitted,” the party states.

“Critically, five regional electoral districts – Flinders, Giles, Stuart, Frome and Chaffey – suffer from a problematic combination of extremely low (and likely declining) elector numbers and a very limited capacity to accommodate piecemeal adjustments, by reason of their geography and the fact they border one another.”

Of the five, only Giles is held by Labor.

“Even if the Commission were to take an approach that saw it do the bare minimum to bring these five districts to just within the edge of the permissible tolerance, the preservation of all five districts will be most difficult, and plainly not sustainable in circumstances where the Commission is projecting that elector numbers in these regions as a whole will continue to fall.

“By contrast, if this problem is addressed now, this Commission can set boundaries which will not only bring all seats within the permissible tolerance… but will have the virtue of ensuring… greater equality as between the districts [and] reduce or avoid the inevitability of continual tweaking on an ongoing basis.”

Labor argues one “obvious and appropriate step” is to “consolidate the [five] districts into four, and create a new district elsewhere”.

This, it argues, could be “in the northern metropolitan area of Adelaide” – a heavily-and-increasingly-populated area generally considered Labor heartland – or through the creation of “a new Adelaide Hills-based district” to account for projected population growth as a result of recent planning decisions.

“Why, it may be asked rhetorically, should the Commission pursue anything other than a comprehensive solution?” the submission ponders.

By contrast, the Liberal submission – replete with glossy colour imaging – argues for minimal intervention, insisting the previous commission’s boundaries “were fair and should be the starting point for the 2020 redistribution”.

“In respect of the current boundary redistribution, the Liberal Party submits changes based on the minimal disturbance principle with a focus on ensuring that the electoral districts comply with the permissible tolerance,” argues its submission, signed off by state director Sascha Meldrum. 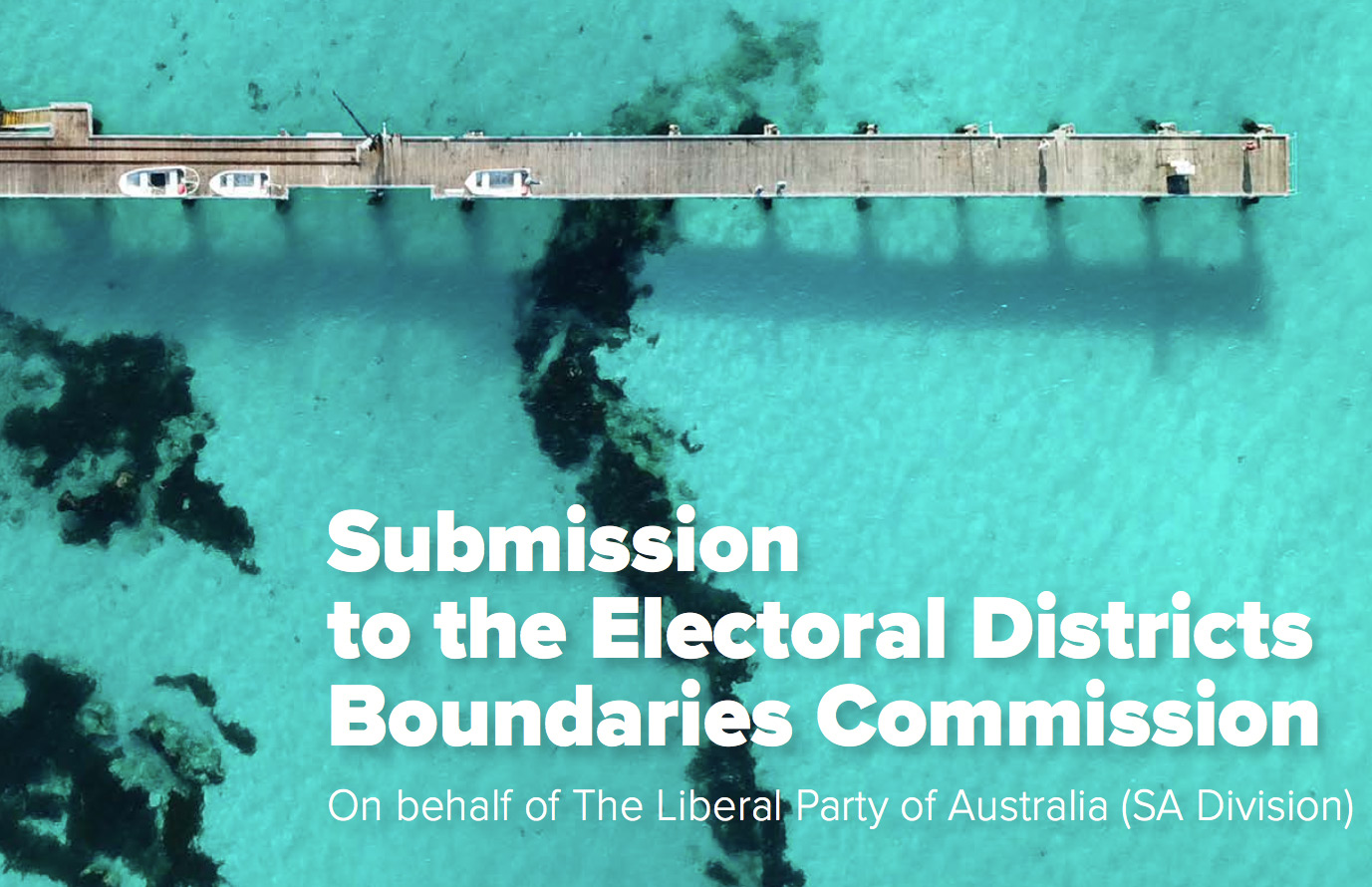 The front page of the Liberal submission.

“Whilst adhering to the permissible tolerance, the Liberal Party submits the Commission should, so far as practicable, minimise disruption to existing boundaries… there is a real risk that any attempt to draw boundaries based on projected electoral data will result in a radical redraw which may… turn out to be entirely unnecessary.”

It proposes no change at all to 33 of the parliament’s 47 lower house seats, with minor adjustments to the remaining 14 – of which six are currently Liberal-held.

It concedes there is “a need to increase the voters” in its regional Eyre Peninsula stronghold of Flinders, with “the most logical electorate to seek those voters from [being] the neighbouring electorate of Giles” – Labor’s only regional seat.

The Liberals propose reducing the number of electors in Elizabeth – currently 2.5 per cent over quota – by a shuffle of adjoining boundaries, including along Port Wakefield Rd.

It goes on to argue: “It is important to discount any proposal, which, regardless of its ostensible raison d’être, is intended to pursue a political advantage at the expense of electoral fairness and community of interest.”

“The outcome of the redistribution must be fair, so the EDBC’s decisions will be accepted – and respected – by the public,” the Liberal submission concludes.