Last month, the Federal Government announced welfare recipients on the AusStudy and JobSeeker payments would receive an additional $550 every fortnight for up to six months from April 27.

But many welfare recipients who received their payment on April 27 did not get an increase.

Services Australia told InDaily the boosted amount would be made “from April 27” – rather than on April 27 – as part of people’s usual payment.

As a result, people who received a payment on April 27 but did not report for the period including April 27 would need to wait another fortnight before seeing an increase.

Known as the coronavirus supplement, the payment was introduced as part of a series of financial measures to assist the thousands of Australians left without jobs due to forced business closures as a result of COVID-19.

The temporary supplement provides people on the JobSeeker – previously known as NewStart – a total of $1115 per fortnight and AustStudy recipients with up to $1145 per fortnight.

It is the first time the payments have increased in real terms in 25 years. 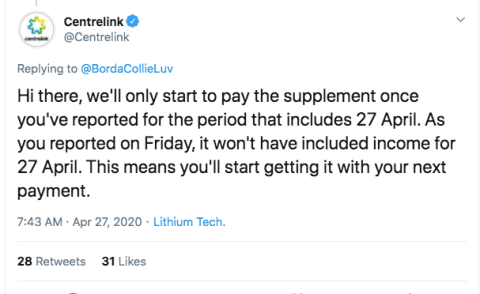 Medical student Kris Schroeder said he had expected to receive the increased payment to his AusStudy on Monday.

Without it, he said he would have to continue relying on his credit card to survive.

“I’m a student and I’ve still got two years of full-time study left, so I can’t work. The amount I get barely covers my rent – I have like $100 left over,” Schroeder said.

“The whole thing was just very poorly communicated. Saying ‘from April 27’ is like saying, ‘I’m driving from Melbourne to Adelaide but I’m leaving from Ballarat’. Why say from if it’s not actually from?”

A spokesperson for Services Australia said regardless of the payment date, JobSeekers would not be disadvantaged.

“If they continue to be eligible, they will be paid the supplement for up to six months from yesterday,” the spokesperson said.

Kym Mercer, from the Unemployed Workers Union, said she had been inundated with people who were confused about the date they’d receive their payment.

She said part of the confusion was as a result of Services Australia’s convoluted reporting system.

“If you are due to get your payment on Friday but you report on the Thursday for the previous fortnight you won’t get the supplement until the next time you report,” Mercer said.

“The way Centrelink has been advertising the payment as from the 27th … really confused people. And a lot of people have been budgeting on it.

“There are people out there who were thinking: ‘Yay! I can finally afford food and pay my rent, because I couldn’t even pay my rent on what I was getting.’ And now they have to wait another two weeks of not being able to eat and being even further behind on my rent.”

Mercer said Centrelink’s reporting system was not only confusing for people who had recently started receiving the payment.

“Unless you know your way around the system, it’s really hard,” she said.

“It’s not just people new to the system.”

She said the payment confusion was an example of how “broken and difficult” the system was.

“Everything to do with coronavirus, whether it’s the millions of people putting in intent to claims or the constant crashing of the system, all of that has had an effect … and for many people, this is their lifeline,” she said.

Meanwhile, Prime Minister Scott Morrison was adamant today that the JobSeeker allowance will be cut in half once the coronavirus crisis is over.

He insisted the unemployment benefit would return to normal at the end of September.

“This was an emergency response measure,” he told reporters in Canberra on Wednesday.

“This was not a change in the government’s view about the broader role of the social safety net in Australia.”