South Australia has recorded its sixth consecutive day of no new cases of coronavirus, with the state’s total remaining at 438.

Of the state’s total, about 96 per cent of cases have recovered, with only 14 confirmed active cases in South Australia and four people in hospital.

Two men, aged 68 and 75, remain in a critical condition in the ICU.

Spurrier said the men were receiving a “high level of care”.

She said while the two-week COVID-19 testing blitz was nearing its end, South Australians who had any symptoms should still be tested.

South Australia has now tested more than 53,000 people for COVID-19 since February, with 29 per cent – or 15,693 – of the tests occurring during the past fortnight.

She said the testing would be voluntary.

Special restrictions on the Barossa Valley region have been lifted after a concerning cluster of COVID-19 cases last month.

More than 40 infections in the region were linked to two tour groups, one from Switzerland and the other from the US.

The cluster prompted health officials to close schools in the region and restrict the movement of people over and above the measures that applied to the rest of the state.

But chief public health officer Nicola Spurrier says the last virus case in the region was reported on March 31 and a decision has been made to ease the burden on Barossa locals.

“Going forward, the Barossa will be treated exactly the same as the rest of South Australia.”

That will include the reopening of all public schools on Wednesday.

Other public schools across the state opened on Monday with attendances averaging about 63 per cent after assurances from health officials they remained low-risk environments for the spread of the infection.

NSW will ease gathering restrictions from Friday, May 1.

A maximum of two adults and their children will be permitted to visit others in their homes.

Bondi and Bronte beaches have reopened for exercise only while Tamarama beach is only open for locals.

Students will return to classrooms by mid-term following a staged return during the first fortnight.

“We know that for many people, they’ve been cooped up in their homes for a number of weeks, and with the exception of exercising, medical needs or buying what they need or going to work, many people have been isolated in their homes,” NSW Premier Gladys Berejiklian said.

Coronavirus restrictions to be reassessed on May 11 when the state of emergency ends.

“I don’t know what transmission will look like this week or next week, but I think the state of emergency going to May 11 is a nice line-up with the national cabinet process for a real look at changing the restrictions,” Victorian Chief Health Officer Professor Brett Sutton said.

Stay-at-home restrictions to ease from Saturday, May 2.

Family picnics and weekend drives allowed, national parks will reopen and people can shop for clothing and shoes.

Citizens must stay within 50km of their homes, and social distancing will still be enforced.

People from the same household can go out together, while those who live alone can spend time with one other person.

No change to schools until at least May 15 with students continuing to learn remotely where they can.

“We recognise that Queenslanders have done a great job in trying to flatten that curve. So we also know it’s having a big impact on people’s mental health. We thought we could lift some stay-at-home restrictions,” Queensland Premier Annastacia Palaszczuk says.

Weddings and funerals can have up to 10 people present.

In real estate, open houses and display villages permitted but records must be kept of everyone who enters a home.

Students will return to the classroom from May 29.

WA Premier Mark McGowan said it was a “cautious relaxation” of restrictions.

South Australia health officials are looking at which restrictions can be lifted after a fifth consecutive day of no new coronavirus cases.

“While you will see some states starting to adjust the restrictions, it’s worth bearing in mind that South Australia didn’t regulate to the same degree,” SA Chief Public Health Officer Professor Nicola Spurrier said.

Tasmania won’t follow the lead of other states in easing social restrictions.

Restrictions closing non-essential retail in the northwest have been pushed back to at least May 3.

Most Tasmanian students to begin term two on Tuesday remotely, but schools in the northwest area will open a week later.

“Where some states might lift restrictions early, I don’t believe we will be doing that. I don’t intend to make knee-jerk reaction and take us to a position where the restrictions come off too quickly and then leaves us exposed,” Tasmanian Premier Peter Gutwein said.

Parks and reserves will reopen this weekend.

Cafes and gyms expected to reopen in June, but under strict rules.

The territory’s borders to be the last things to be lifted.

“Based on our progress so far we expect there will be some businesses that can re-open or return to more regular operations within the next months,” Territory Chief Minister Michael Gunner said.

“This is not a race or a contest between jurisdictions. We are in a great position here in the ACT, largely thanks to the great community effort in complying with the rules around physical distancing. However, we have seen around the world what can happen when restrictions are imposed too late or taken away too early,” ACT Chief Minister Andrew Barr said.

Australia’s top medical officer wants to see fewer than 20 new cases of coronavirus each week – or ideally none – before the nation starts easing restrictions.

Brendan Murphy says the nation cannot be complacent as long as any new coronavirus cases are being found but it can be more confident if testing is expanded to include people without any symptoms and contact tracing is ramped up.

“National cabinet has endorsed a strategy of significant suppression. If we get elimination as part of that, which we probably are seeing in some parts of the country, that is fantastic but elimination is never a certain situation,” he said.

“Even if we release restrictions in the future, people need to change the way they interact permanently.”

States are already moving to ramp up testing, with Victoria aiming to test 100,000 over the next fortnight, double the number it has checked so far during the pandemic. South Australia’s two-week testing blitz ends this week. 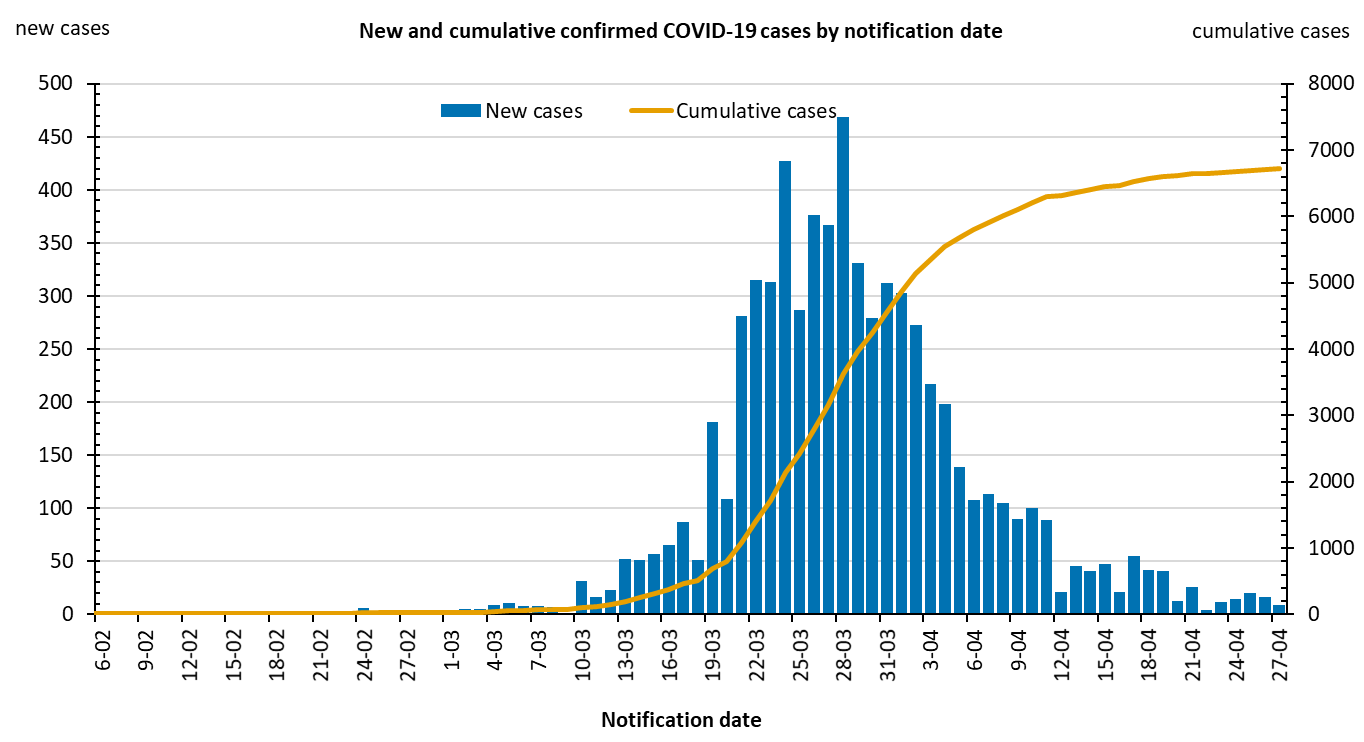 The smartphone app uses Bluetooth to keep track of a user’s close contacts and its data would supplement the work of about 7000 healthcare workers doing contact tracing across the country.

“This (strong) effort will help protect ourselves, our families, our nurses and our doctors. (Thank you) AUS as we work together to beat this virus,” Health Minister Greg Hunt said on Twitter.

Australia continues to have a low rate of new cases, with 6720 people diagnosed with the virus to date, rising by just nine nationally on Monday.

More than four in five of them have recovered while 83 people have died.

Pandemic ‘far from over’: WHO

The coronavirus pandemic is “far from over” and is still disrupting normal health services, especially life-saving immunisation for children in the poorest countries, the head of the World Health Organisation (WHO) says.

The UN agency is concerned about rising numbers of cases and deaths in Africa, eastern Europe, Latin America and some Asian countries even as the numbers flatten or decline in some wealthier countries.

“We have a long road ahead of us and a lot of work to do,” WHO Director-General Tedros Adhanom Ghebreyesus told a virtual news conference in Geneva on Monday, adding that a second wave of infections could be prevented with the right actions.

The coronavirus, which emerged late last year in the central Chinese city of Wuhan, has already infected 2.97 million and claimed 205,948 lives, according to the latest Reuters tally.

Tedros expressed concern that the health of children was being threatened by the impact of the coronavirus emergency on vaccination programmes for other diseases.

“Children may be at relatively low risk from severe disease and death from COVID-19 – the respiratory illness caused by the novel coronavirus – but can be at high risk from other diseases that can be prevented with vaccines,” Tedros said.

About 13 million people have been affected worldwide by delays in regular immunisations against diseases including polio, measles, cholera, yellow fever and meningitis, he said.

Shortages of vaccines against other diseases are being reported in 21 countries as a result of border restrictions and disruptions to travel caused by the coronavirus pandemic, Tedros said, citing the GAVI global vaccine alliance.

“The number of malaria cases in sub-Saharan Africa could double,” he said, referring to the potential impact of COVID-19 on regular malaria services.

“That doesn’t have to happen, we are working with countries to support them.”