Five in a row – no new SA cases

South Australia has recorded its fifth consecutive day with no new cases of coronavirus, with the state’s total remaining at 438.

Only 20 confirmed active cases remain across the state, with four people still in hospital.

Two men, aged 68 and 75, remaining in a critical condition in intensive care.

She said just 612 people were tested yesterday, consistent with previous weekends being a lean time for people seeking tests.

However, she said more than a quarter of the 53,000 tests performed in SA since February were conducted in the past fortnight, since the state broadened its testing criteria.

“This is absolutely excellent news, and many of you will be thinking ‘when can we lift these restrictions now in SA?’,” Spurrier told media today.

“You may be hearing Queensland have made some alterations, as have WA.”

However, she noted those states were relaxing restrictions that had never been applied in SA, such as going for a drive or visiting national parks.

“We need to do this in a very sensible way, looking at the evidence from around the world,” she said, noting “outdoor activities are much less of a risk than indoor activities and we need to be taking those things into account”.

She agreed that meant activities such as school sport were likely to be reintroduced sooner than the reopening of pubs.

“I think if you consider the public health risks, where you’ve got large numbers of adults together, people are more relaxed and it’s more difficult to apply social distancing, from a commonsense perspective – yes, you’d make that assertion,” she said.

The Australian economy could take a $400 billion hit if restrictions adopted to fight the spread of COVID-19 continue for six months, modelling by the Business Council of Australia shows.

The data released on Monday shows the gross domestic product impact on the economy would be $402.6 billion, or 20.7 per cent, in calendar 2020 if a longer-term “U-shaped” recovery option was implemented.

The federal government has already flagged the restrictions and measures set up around the virus could remain for six months.

The business lobby group, which is campaigning for an early easing of restrictions to get the economy going again, also said Australia must consider whether changes to industrial relations and taxation laws adopted during the crisis should continue.

Elective surgery will be gradually reintroduced over the next two weeks with the process overseen by an expert surgical advisory group.

The Government announced today the group would be led Professor Chris Baggoley, former chief medical officer to the Australian Government, who led Australia’s response to the 2014 Ebola outbreak.

Minister for Health and Wellbeing Stephen Wade said the expert group, which includes public and private sector surgeons and other health professionals, would safeguard patient care as restrictions are removed.

“While other restrictions will be with us for a long time, the reintroduction of elective surgery from this week is an encouraging early sign,” Wade said.

“The state’s most senior surgical clinicians will oversee the gradual reintroduction of elective surgery over the next two weeks based on the availability of Personal Protective Equipment (PPE), clinicians and surgical pharmaceuticals.” 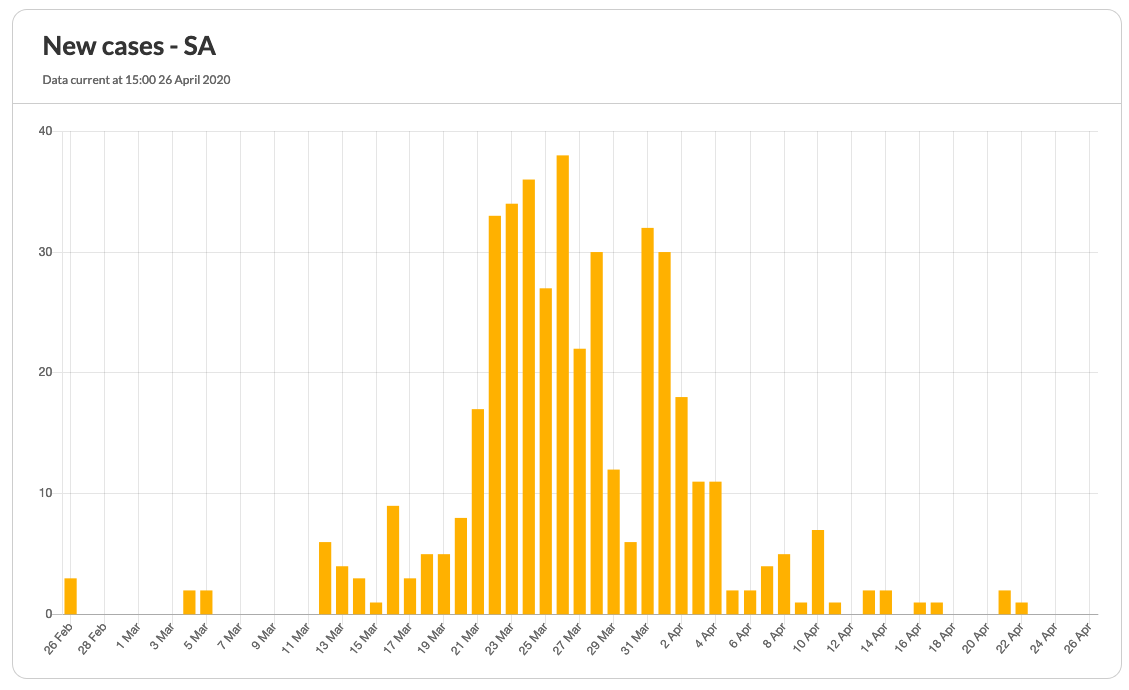 Students, parents and teachers across the state were met with error messages as they attempted to access the State Government’s online learning portal today, as thousands of children returned to school for the start of term.

Second term got underway with many families who had previously notified schools their children would learn from home instead opting to send them back to class, after SA’s chief public health officer Professor Nicola Spurrier last week insisted it was safe for them to do so despite the ongoing coronavirus pandemic.

At least one million Australians have downloaded the COVID-19 tracer app, which aims to help health officials identify people who may have come into contact with someone with the disease.

Called COVIDSafe, the voluntary app became available for download and registration on Sunday evening and has been backed by doctors, nursing, business and banking groups.

The app assists in the early alert and finding of people who may have been in contact with a person who has tested positive to coronavirus.

Hunt also said anyone concerned about privacy could use a fake name when they registered for the app.

“Yes you can – that’s legally available,” he said.

The app is based on Singapore’s Tracetogether software, which records the Bluetooth connections a phone makes with others so the user can give that data to state health authorities if they catch the virus.

The government hopes a broader testing regime and the contact tracing app will lead to a relaxation of social and trading restrictions imposed since the pandemic began, earlier rather than later.

Prime Minister Scott Morrison said only health authorities would have access to the data.

“It’s another tool we need to get back to normal as much as we can,” he said.

Contact numbers picked up by a person’s phone can only be downloaded by a health officer when someone gets the coronavirus and gives permission.

“No other government agency can use this information, no one in the commonwealth government at all, and in state authorities, only the health officer can use it,” he said.

“Not the police, not the welfare people, nowhere else. Just the health officer.”

The national coronavirus death toll reached 83 on Sunday, with three new deaths reported in NSW, Tasmania and Victoria, but the rate of new infections continues to drop.

There were just 16 new COVID-19 cases across the nation on Sunday, bringing the total to 6711 cases. 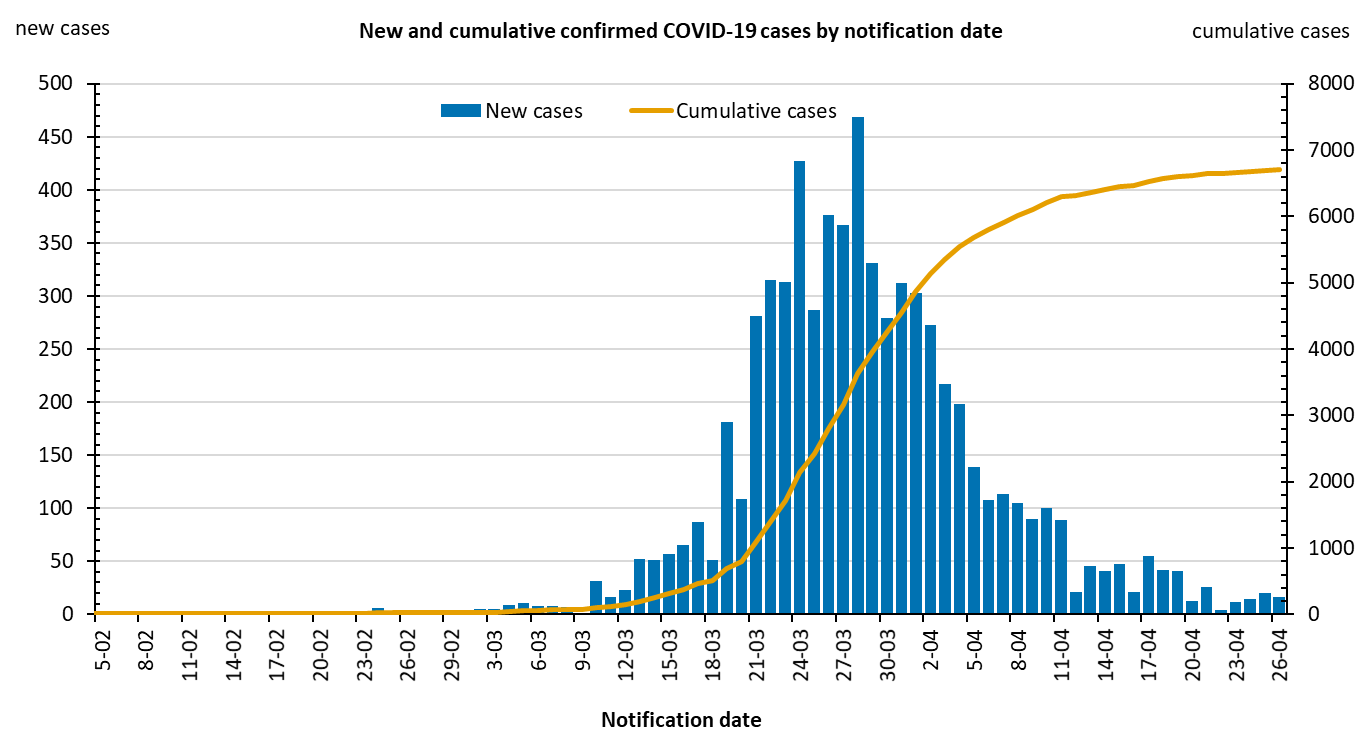 Italy is set to ease a number of coronavirus-related restrictions from May 4, permitting more outdoor sports and exercise, Prime Minister Giuseppe Conte says.

Conte made the announcement in Rome while presenting the government’s plan for the gradual reopening of the country after weeks of strict lockdown measures to slow the spread of the novel coronavirus.

The government is also planning to gradually ease restrictions on businesses, Conte said on Sunday.

One the hardest-hit countries in Europe, Italy has been under lockdown for longer than any other Western nation, and has counted more than 26,000 deaths and nearly 200,000 infections.

Citizens have been living with particularly strict curfews since March 10.

Conte said citizens will be allowed to move around in their own areas under certain rules starting in May, however travelling to other regions will remain largely prohibited for the time being.