No new cases in SA

South Australia has had no new cases of coronavirus today – the second day running with no recorded new infections – with the state’s total sitting at 438 confirmed cases.

SA Health confirmed 401 people or 91 per cent had recovered from the infection and only 33 active cases remain.

Four people are still in hospital with two in a critical condition in intensive care.

More than 50,000 tests have been conducted in South Australia since February – the most of any state.

Treasurer Rob Lucas says the Government will provide $50 million in “emergency land tax relief for landlords” which is expected to assist thousands of SME businesses and residential tenants across South Australia – bringing to $120m total land tax savings for local investors over the next year.

The scheme, modelled on similar moves in NSW and Victoria, will offer “eligible landlords” a 25 per cent reduction on their 2019-20 land tax liability on affected properties (criteria and application procedures are available here).

The Government has also announced rent relief for tenants of government agencies “that have been forced to close or are significantly impacted as a result of COVID-19”.

South Australian health officials have thrown their support behind a contact tracking phone app set to be rolled out in the continuing fight against the coronavirus pandemic.

Chief Public Health Officer Nicola Spurrier says the app will be “incredibly helpful” to her staff’s efforts to track down people who may have come in contact with the virus.

“It will really be a key part of being able to do our contact tracing,” she said.

“Because it will allow us to very quickly get hold of people if they’ve been in contact with a known case.

“Now that protects the individual but it also offers wider community protection.”

The app is expected to be introduced in the next few weeks with the data to only be made available to state health officials for their work to combat COVID-19.

Spurrier said she hoped as many people would download it to their phones, to ensure it was as effective as possible.

At the first hearing of the Legislative Council’s COVID-19 committee yesterday, Spurrier said “surveillance” was the key to lifting restrictions – not necessarily the low rate of new infections.

“In this space, we’re looking at a plan more of surveillance – how would we be able to test more people in South Australia in a rigorous way with a rigorous sampling frame for us to feel confident that we’re not missing any cases,” she said.

Aged care homes may have to seek a special exemption if they want to ban visitors or confine residents to their rooms.

Prime Minister Scott Morrison said if facilities that had gone beyond baseline coronavirus requirements did not return to that level and allow each resident two visitors a day, his government would make it mandatory.

Morrison said nursing homes would have to argue why they had a “very real and serious medical reason” to need a tighter lockdown.

It comes as Australia’s chief medical officer Brendan Murphy revealed social distancing restrictions will not be required in schools across the country.

He said the community risk of having children in schools was low.

Elite sport will soon have restart guidelines as federal and state leaders map out the return of major codes during the coronavirus pandemic.

Prime Minister Scott Morrison said competitive local sport and passive activities like surfing and walking would also be covered under the principles, which national cabinet has agreed to develop.

“That is such an important part of our way of life here in Australia,” he told reporters on Friday. 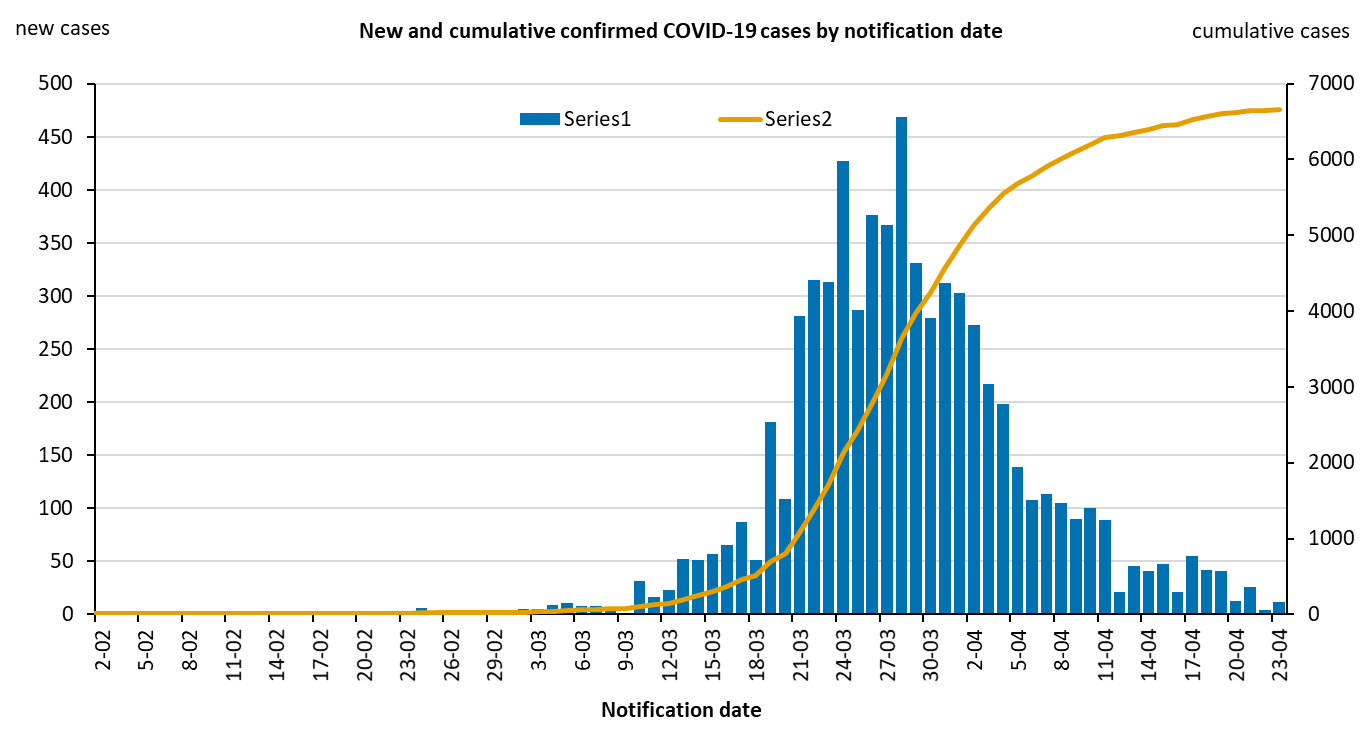 The world in brief

NY study estimates 14 per cent had virus: Nearly 14 per cent of 3000 people tested for coronavirus antibodies in the US state of New York returned a positive result, Governor Andrew Cuomo says. In New York City, 21 per cent of those tested had antibodies. If the results translate to the true incidence of the new coronavirus, it would mean 2.7 million people have been infected in the state of New York.

UK economy in strife: The UK’s economy is crumbling under the strain of the coronavirus lockdown and government borrowing is soaring to the highest levels in peacetime history. Bank of England interest-rate setter Jan Vlieghe said the damage was worse than anything Britain has experienced in the past hundred years at least.

Africa could become COVID-19 epicentre: Africa has seen a 43 per cent jump in reported COVID-19 cases in the last week following a warning from the World Health Organisation that the continent of 1.3 billion could become the next epicentre of the pandemic. Africa has a “very, very limited” and “very, very strained” testing capacity, John Nkengasong, director of the Africa Centres for Disease Control and Prevention, said in his weekly briefing on Thursday. It means that the surge in infections on the continent is likely to be even higher in reality, he said. The WHO’s recent report painted a grim picture for Africa. It warned the virus could kill more than 300,000 people and push 30 million into desperate poverty.