New projections from Deloitte Access Economics offer a balanced view of SA’s response to the coronavirus crisis, but hold a grim warning for a state whose “fundamentals remain sketchy”.

It comes as Lucas forecasts more debt-funded stimulus measures, telling InDaily it’s “inevitable we’ll be called on to do more”.

Deloitte has released its quarterly Business Outlook, updating a missive sent at the end of March, which it now concedes was “rushed out” ahead of the Federal Government’s $130 billion JobKeeper package and successful efforts to “flatten the curve” of the coronavirus spread.

The publication compares economic forecasts of all states and territories, with New South Wales, as the nation’s COVID-19 hotspot, unsurprisingly “hardest hit by the virus”, and wtih Sydney Australia’s “largest, most crowded and most international city [with] more of its economy in hard-hit occupations and industries… its economy remains relatively more at risk than the average”.

Deloitte expects South Australia to be the third hardest-hit economy, predicting Gross State Product to decline in the latter part of the current financial year, before a sharp 6.9 per cent drop in 2020-21.

It predicts a sharp rise in unemployment, with SA already holding the highest jobless rate in the nation, at 5.8 per cent for February – before the coronavirus pandemic hit the economy.

While it expects a gradual decline in the jobless rate for the three years thereafter, it doesn’t expect it to return to its most recent levels before at least 2024-25.

In general, Deloitte argues states are more at risk in the current climate if they have “an above average number of cases, bigger populations and denser city scapes, an older or more indigenous population, or a greater concentration of workers in at risk occupations and industries”.

They are at less at risk if they have significantly cut discretionary travel, have a bigger-than-average state stimulus response or “a greater ability to sell industrial inputs to world markets”.

The report’s authors argue SA and Tasmania “are both vulnerable to the coronavirus crisis given their older populations and poorer health outcomes generally” but note “their swift action and big spending are big positives”.

“Both states [SA and Tasmania] have large public sectors and employment in ‘essential worker’ sectors” such as health and aged care, the report notes.

Perversely, the paper suggests SA’s entrenched unemployment issues have provided some relief amid the economic response to COVID-19, with JobSeeker payments temporarily doubled and the JobKeeper wage subsidy guaranteeing a $1500 fortnightly payment for eligible workers.

“For those in hard hit sectors, the federal wage subsidy and JobSeeker allowance reforms provide dollars that go further in [SA] than they do in Australia more generally,” it says.

“For example, SA already had the highest unemployment rate in the country, the second lowest average weekly earnings and a disproportionate share of residents receiving welfare payments… other things equal, that group gets more money than they were doing.

“The federal government’s wage subsidy will get more bang for its buck here, as the lower average earnings mean for many these payments could see an increase in their income.”

However, it also notes SA “is more exposed to the negatives flowing from COVID-19, in part as the state’s economy had lost some momentum prior to the coronavirus crisis arriving”. 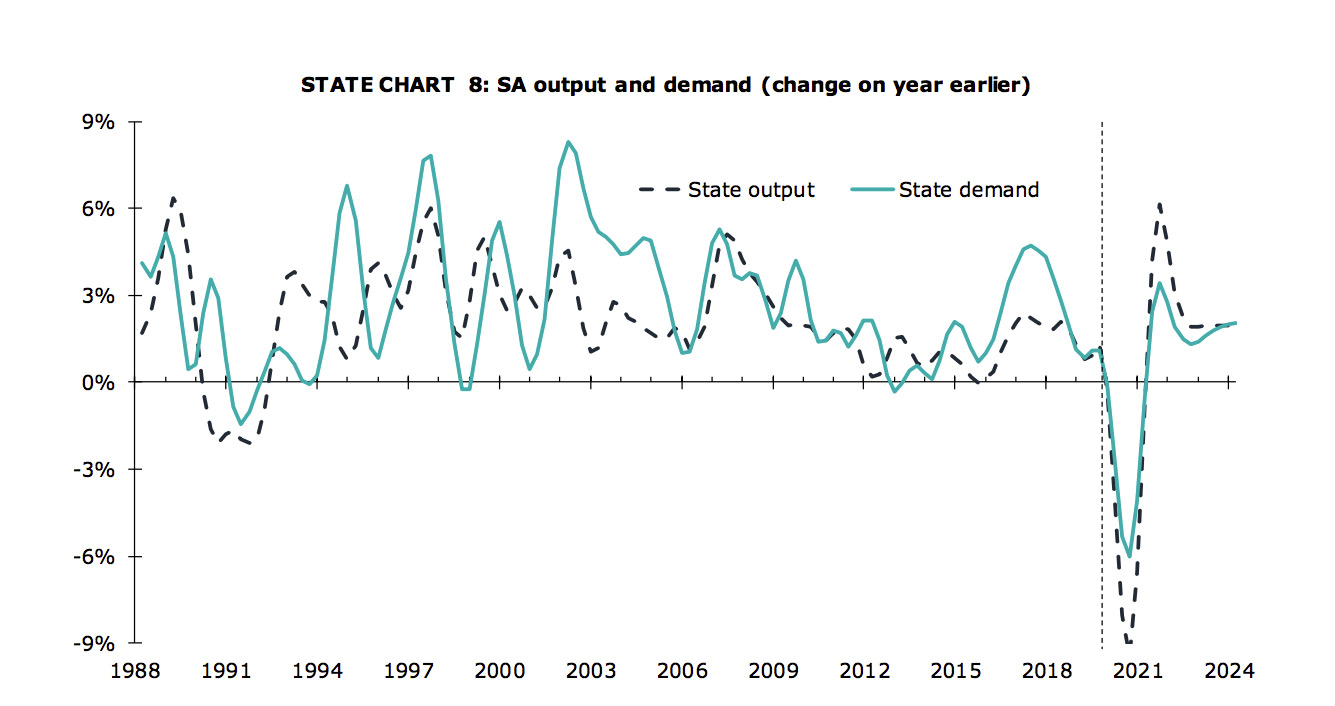 While it argues the Marshall Government has been “doing its part” with “significant” stimulus spending and “proactively” imposing border controls in line with other states, “longer-term, the state’s fundamentals remain sketchy”.

Just last month, before the full impact of the coronavirus pandemic became clear, Lucas warned South Australians “should be concerned that our economy – nationally and in SA – is slowing”.

“There will be very significant impacts on economic growth,” he said at the time after Australian Bureau of Statistics figures showed SA recording persistent negative state final demand figures – even before the bushfire or COVID-19 crises had hit.

At the time though, Lucas said final demand was “not the best measure of growth” – favouring Gross State Product, which also accounts for exports.

Lucas told InDaily today the Deloitte report was “a fair guesstimate of the state of the economic and financial challenge that confronts Australia and South Australia as well [but] given we don’t know the final shape and structure of COVID-19, that’s all it can be”.

“But the reality is, together with the rest of Australia, they’re certainly going to be indicative of where we are.

“We’re going to be in a world of pain, nationally and in SA as well, in economic and financial circumstances… it’s a huge challenge.

“We could spend a lot of money estimating, but all it’s going to show is we’ve got a very significant financial challenge… it’s not really going to change the shape and structure of what we believe we need to do, which is more of what we’ve been doing – inevitably we’ll be called on to do more.”

He said ongoing stimulus funding “will be funded by an increase in debt”. 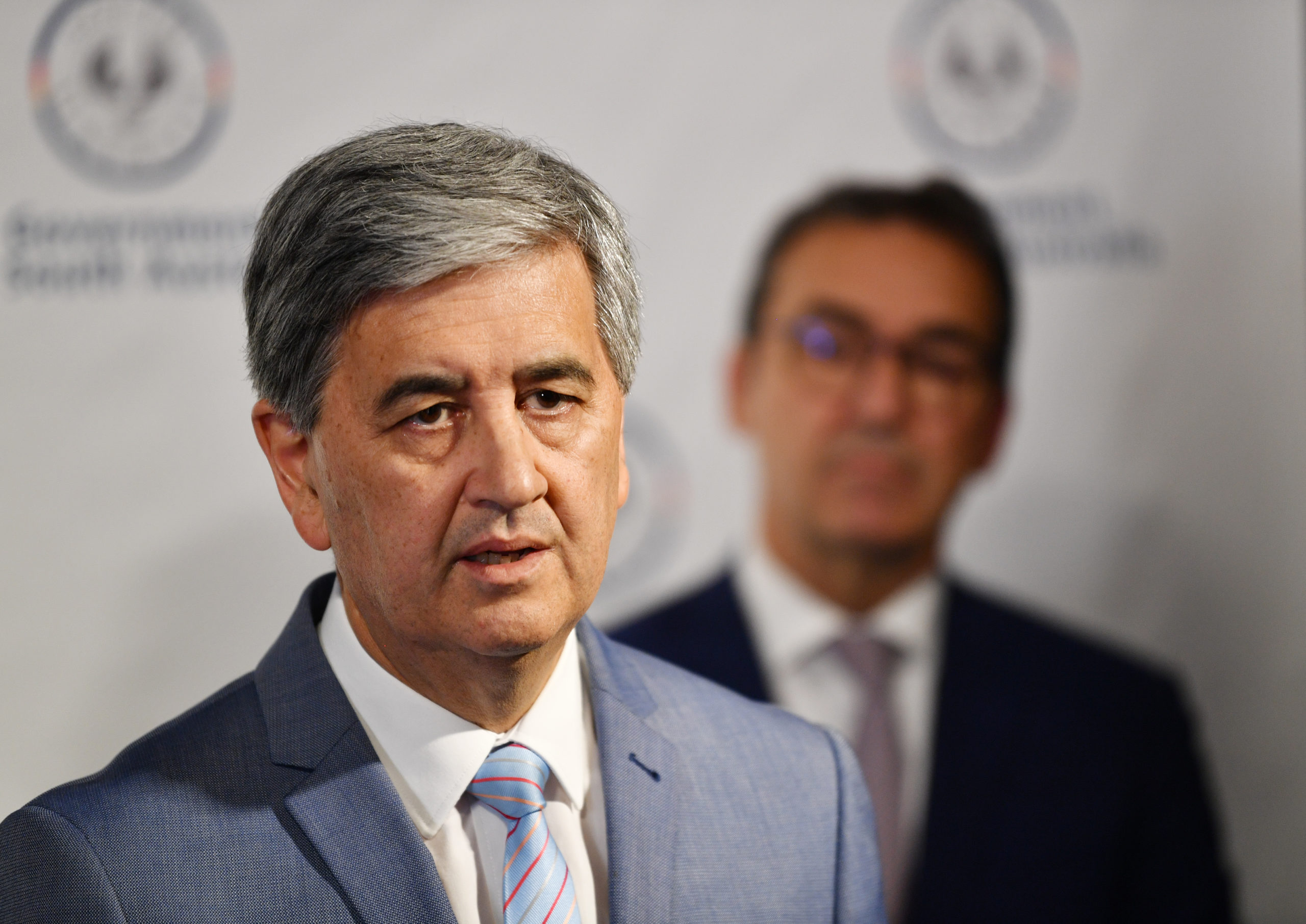 Lucas said a positive aspect of the analysis was the praise for the Government’s “swift action and big spending stimulus [which was] nationally significant and that was recognised by Deloitte as such”.

He didn’t resile from the report’s concerns about the SA economy prior to the current crisis, saying: “Sketchy is mildly understated, frankly.”

“I think we acknowledge that we face financial challenges as we transition from where we were to defence shipbuilding, space and the jobs of the future – there’s a significant challenge the state had, and we did have and still have a clear plan in terms of trying to grow the state’s economy,” he said.

He cited reducing the cost of doing business through payroll and land tax changes and ongoing work towards driving down high water and electricity prices, which he called “a job killer”.

“That narrative is as important now as it was at any time in the last two years,” he said.

Labor’s Shadow Treasurer Stephen Mullighan said the report was “concerning across the board” for all states and territories.

“The concerning thing for SA is the observation that the state economy had lost momentum before COVID-19 impacted, so we’re not as well-placed to deal with this economically as we otherwise would be,” he said.

“That’s the concern from our perspective – that we’re starting behind the eight-ball when it comes to the economic recovery and rebuilding jobs.”

It comes as job advertisements were slashed by two-thirds in recent weeks as Australian businesses absorb the economic pain of the coronavirus.

Victoria and NSW have shown the biggest declines on jobs website Seek as the pandemic drives a wrecking ball through the national labour market.

Seek managing director Kendra Banks said the impact of the virus had been swift and extreme, compounding problems already caused by the summer’s bushfire crisis.

She said two key trends were emerging during the pandemic: a mass reduction in available jobs at a national level, and an urgent demand for workers in specific industries.

As more people in employment work from home, software developers and cyber security experts are in high demand, along with nannies and tutors. 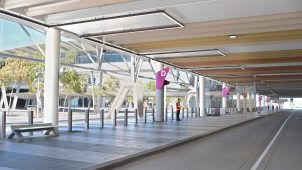 The federally-funded Naval Shipbuilding College is teaming up with the hardest-hit industries to launch a recruitment drive.

The college has established an online jobs portal and is rolling out a range of training short courses focused on priority roles in the shipbuilding field.

New jobs ads posted on Seek in the first week of April were down 65.3 per cent compared to the same time last year.

The feeling of job security has dropped among people in work but more than half still believe they are safe in their current roles.