The rate of increase of confirmed coronavirus cases in South Australia continues to slow, with another two added to the tally on Monday afternoon – one aged in their 20s and the other in their 60s.

That followed two new cases reported on Sunday, and brings the total number to 411.

Of that total, 12o cases were linked to cruise ships, although the state’s Chief Public Health Officer Nicola Spurrier said neither of today’s new cases fell into that category.

She said 53 of the 411 confirmed cases had officially “recovered” – having returned two negative tests – but she expected that total to quickly rise.

Only 20 people are being treated for COVID-19 in SA hospitals, but 10 of those are in intensive care – eight men and two women – with seven in a critical condition.

Of ongoing concern is a cluster of cases linked to baggage handlers at Adelaide Airport, with 28 cases so far – 17 handlers and 11 second-hand contacts.

Spurrier noted the number of tests requested over the weekend had fallen, but urged people to seek a diagnosis if they were displaying symptoms and had travelled recently from interstate or overseas, had had close contact with a confirmed case or had been in the airport or the Barossa region. 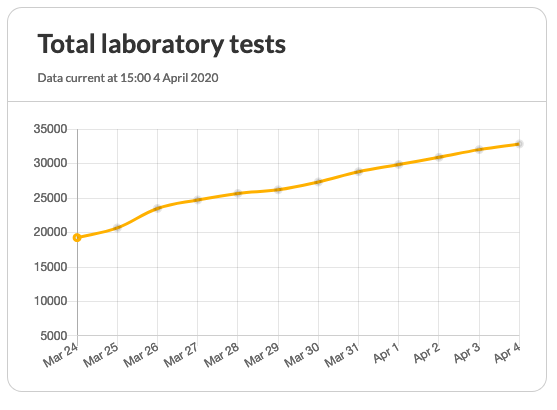 More beds are being opened up and more nurses trained to deal with serious coronavirus cases across South Australia.

The Women’s and Children’s Hospital in Adelaide is fast-tracking intensive care training for about 80 nurses.

Three additional high-dependency beds have already been opened and the state government is planning for an additional 10 intensive care beds at the hospital.

“The Women’s and Children’s Hospital will be on the front line of dealing with the most severe cases of this insidious disease,” he said.

“The battle to control the coronavirus pandemic needs to be fought by all of us in changing the way we live to contain the virus.”

Murphy said yesterday there were now 5687 cases across the country with a rise of 139 over the past 24 hours.

For about 10 per cent of these cases, the transmission of the virus is unknown, as there is no known contact with another case.

“I may sound like a broken record at times but community transmission is what worries me most of all,” he told reporters in Canberra on Sunday.

“Those are the reasons we have brought in the social distancing measures and all of those measures to stop the spread.”

COVID-19 has now claimed the lives of 39 Australians, including four new fatalities in NSW and one in Queensland, but a number of states have reported lower numbers of new infections.

* Australian deaths: 39. Eleven were passengers on the Ruby Princess.

* The number of global coronavirus cases has passed one and a quarter million.

Funding for regional and small newspapers

The announced closure of several regional newspapers has prompted the release of $5 million in Federal Government funding to “help keep local communities informed” during the coronavirus crisis.

Communications Minister Paul Fletcher says the fund has been adjusted “so money is available as quickly as possible to help publishers keep journalists in jobs and local communities informed”.

“Many media organisations, particularly those in regional areas, are facing significant financial strain due to the community’s necessary response to COVID-19,” Fletcher said on Monday.

“As we face these unprecedented challenges together, the media’s role in producing quality news and providing Australians with timely and accurate information is crucial. This provides critical support at a time it’s needed most.”

The funding has been brought forward from the Regional and Small Publishers Innovation Fund, with the latest round open to regional and metropolitan publishers and content service providers “producing public interest journalism”.

Regional and small publishers have been calling on the government to release the $40 million understood to be in the fund.

Multiple regional papers have announced their closure during the coronavirus crisis because of the closure of businesses and lack of local advertising, while other mastheads within the News Corp organisation – including the Messenger newspapers in SA – have been taken online, with no more print editions.

Last week The Bunyip newspaper in Gawler shut down indefinitely.

The Queen has urged Britons to believe that “better days will return” as the UK assumed the unwelcome mantle of deadliest coronavirus hotspot in Europe after a record 24-hour jump in deaths that surpassed even hard-hit Italy.

Meanwhile in the United States, people braced for what the country’s top doctor warned would be “the hardest and saddest week” of their lives.

“This is going to be our Pearl Harbour moment, our 9/11 moment,” US Surgeon General Jerome Adams said.

New York City, the US epicentre of the pandemic, suggested a glimmer of hope, with Governor Andrew Cuomo saying that daily deaths had dropped slightly, along with intensive care admissions and the number of patients who needed breathing tubes inserted.

Still, he warned that it was “too early to tell” the significance of those numbers.

Italy and Spain also got some encouraging news. Italy registered its lowest day-to-day increase in deaths in more than two weeks – 525, said Angelo Borrelli, the head of the national civil protection agency.

The pace of infection also seemed to be slowing. The country recorded 4316 new cases on Sunday. Earlier in the outbreak, daily increases topped 6000.

Even so, Borrelli warned, “This good news shouldn’t make us drop our guard.”

Confirmed infections fell in Spain too, and new deaths declined for the third straight day, dropping to 674 – the first time daily deaths have fallen below 800 in the past week.

“We are starting to see the light at the end of the tunnel,” Spanish Prime Minister Pedro Sánchez said.

With 600-plus more deaths reported on Sunday, Britain has recorded more than 4900 virus deaths overall among nearly 48,000 cases.

British Prime Minister Boris Johnson has been admitted to hospital for tests after showing persistent symptoms of coronavirus ten days after testing positive for the virus, although his office said it was not an emergency admission.