A further 11 new cases of COVID-19 have been confirmed in South Australia, as the State Government announced an agreement that will see it join forces with private hospitals in the battle against the pandemic.

Dr Michael Cusack, SA deputy chief public health officer, said this afternoon that the total number of cases in the state now stood at 407, with a teenager among the latest people to test positive.

He said the results for the teenager had only just been confirmed, and interviews regarding contact were still taking place.

“If there are any school links we will inform you … as soon as that information’s available, as soon as we have the detail to share, we will.”

Another one of the new cases is a passenger from the Ruby Princess, bringing the total number of SA cases linked to the ship to 85.

Dr Cusack said investigations were continuing into the COVID-19 cluster at Adelaide Airport, where the total number of cases has increased to 25, 16 of whom are baggage handlers while the others are secondary contacts.

Nineteen people are currently in hospital in South Australia after testing positive for the virus, including eight in the intensive care unit at the Royal Adelaide Hospital, while 46 patients have recovered.

Premier Steven Marshall said this afternoon that an agreement between the SA Government and private hospitals would see the “full mobilisation” of the private hospital sector to help with the fight against COVID-19.

More than 60 private hospitals, which collectively have more than 1700 beds, will accept patients as directed by SA Health and also make their ICU facilities available.

The Premier said he hoped the Government would not need to use the beds, but added “we have got to be prepared for every eventuality”.

He said his biggest concern going forward was complacency.

“As we see the number of new infections stabilise, I don’t want anybody to think that we can relax the restrictions which are in place.

“We need to follow these restrictions. They have been fundamental to us slowing the growth of coronavirus and we need to make sure that these remain in place.

“So my very clear message to the people of South Australia is, this Easter, this school holidays, travel around this state is completely and utterly off. We don’t want people heading off on their family holiday this Easter.”

Dr Cusack said Australia was seeing, “to a degree”, a plateau in terms of the number of new COVID-19 cases, but echoed the Premier’s warning that it was “no time to take your foot off the brake”.

The State Opposition wants harsher penalties in South Australia for people who knowingly have the virus or say they do and assault or threaten a frontline worker.

It is seeking to introduce new laws that would see those convicted face up to 10 years in jail.

SA Opposition Leader Peter Malinauskas said the laws would send a strong message and act as a deterrent.

“We must do everything we can to protect our frontline workers,” he said.

“This is a deadly virus and people deliberately attacking our frontline staff must face the full force of the law.”

The deaths of a man in the ACT and a woman in Victoria have brought the national coronavirus toll to 30.

Two deaths have now been recorded in the ACT, with the second victim a man in his 80s who had pre-existing health issues and died at a Canberra hospital.

Victorian State Health Minister Jenny Mikakos also confirmed the death today of a woman in her 70s, bringing that state’s death toll from coronavirus to eight.

Meanwhile, Victorian police have fined 25 people across the state for flouting coronavirus restrictions.

In the past 24 hours, police carried out more than 700 spot checks at homes, businesses and non-essential services. More than 390 of those checked were returned travellers and 99 of those recent arrivals were not at home when police turned up.

Woolworths and Coles have beefed up social distancing measures ahead of the Easter rush, limiting the number of customers in store to help combat the spread of coronavirus.

Woolworths Supermarkets managing director Claire Peters said the number of customers allowed into each store at any one time would be dependent on its size.

He asked customers to consider pre-planning their Easter shopping to avoid the usual Thursday spike in numbers.

“Traditionally, the Thursday in the lead up to Easter is one of our busiest times in-store,” he said.

“Team members will be at store entrances to provide assistance and let you know when it is OK to come in,” chief executive Steven Cain said. 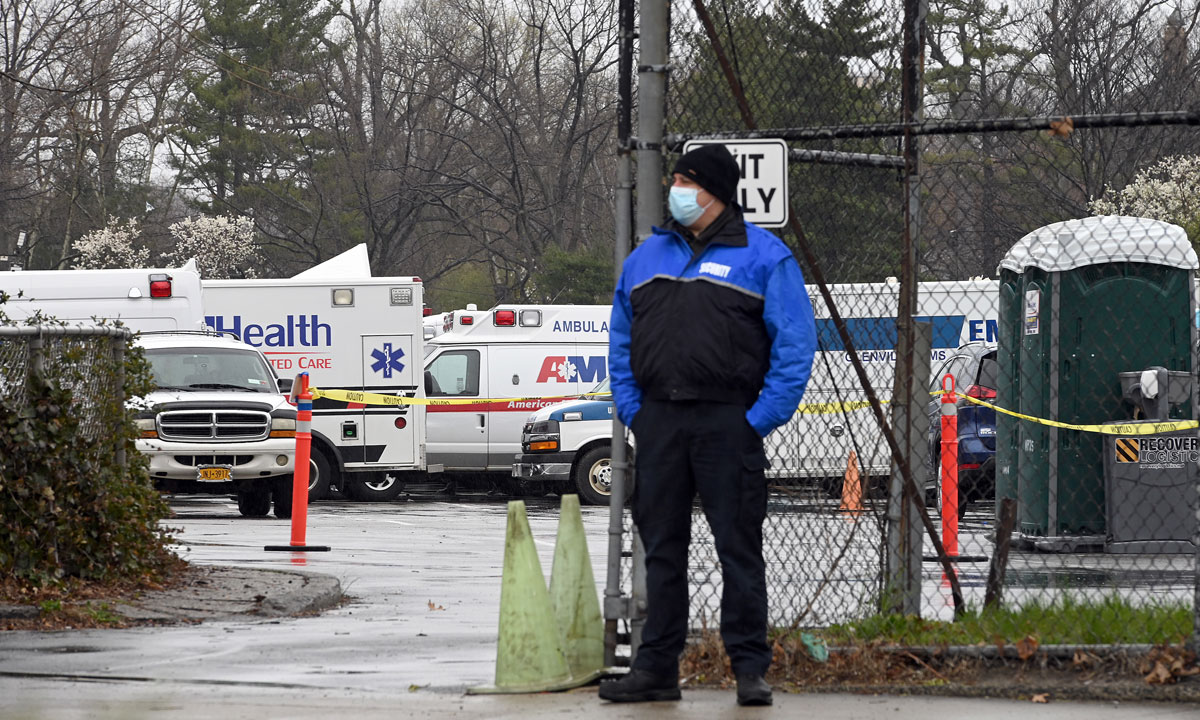 The Bronx Zoo parking lot has become a staging area for some 250 out-of-state ambulances helping transport patients as New York City becomes the epicentre of the COVID-19 pandemic in the US. Photo: Sipa USA

The worldwide death toll from coronavirus reached more than 58,000 early this morning, while known cases around the world soared past 1.08 million, according to figures from Johns Hopkins University.

Italy’s death toll jumped by 766 yesterday, bringing the country’s total number of COVID-19 deaths to 14,681 – still the highest in the world.

But the United States is becoming the new epicentre, with more than 270,000 cases – by far the most of any nation – and more than 7000 deaths.

The state of New York recorded nearly 500 coronavirus-related deaths in a single day yesterday, bringing the statewide total to nearly 3000.

New York City Mayor Bill de Blasio said it had mere days to prepare for the worst of the coronavirus onslaught, and pleaded for federal government help to end a shortage of medical staff and ventilators.

“I think somehow in Washington, there’s an assumption (that) there’s weeks to prepare,” de Blasio said. “There’s not weeks anymore. It is days now.”

Outside the West, China’s epidemic has stabilised after draconian containment measures, while the outbreak in badly-hit Iran still raged while it sparred with traditional foe the United States on the geopolitical stage.

Qantas and Virgin Australia will operate the services, which have been organised after talks with the federal government.

“Many Australians will be able to get to one of these four destinations. They can do so knowing there will be an Australian airline to get them home,” Senator Payne said in a statement last night.

But it’s unclear whether the increase in flights will make it any cheaper for stranded travellers and expatriates to get home amid skyrocketing long haul flight prices in recent weeks.