Golf clubhouses were forced to close indefinitely from noon on Monday along with hotels and restaurants but courses and scaled back pro-shops have been allowed to stay open in most states with local conditions set by state governments.

The advice for South Australia comes out of SAPOL, the Office of Recreation, Sport & Racing and the Office of Liquor & Gaming through Clubs SA, which was updated yesterday.

Golf Australia confirmed this morning that it believed golf was still allowed despite the latest restrictions released last night that have shut down shopping centre food courts and limited wedding numbers to five and funerals to 10 people.

Golf clubs are desperately trying to stay open to provide a safe physical activity for members and prevent thousands of players from cancelling memberships as a result of closures that could run into months.

However, after initially announcing on Monday it would remain open for play, Kooyonga Golf Club announced on Wednesday afternoon it would close its course indefinitely following the enhanced restrictions announced on Tuesday night by Prime Minister Scott Morrison.

According to its Facebook page, Golf Australia SA represents more than 200 clubs and 27,000 golfers in South Australia.

Golf Australia media manager Mark Hayes told InDaily that the nation’s peak body for the sport had continually updated its social distancing recommendations to clubs to minimise the chance of  COVID-19 transmission.

The recommendations include: moving tee off times further apart to reduce groups from congregating before and after rounds; not touching flag sticks and bunker rakes, and; using modified holes that do not require members to reach into the cup.

“Last week we were advising people play with the flags left in holes,” Hayes said.

“This week some clubs around the country and internationally are implementing a thing where if you think of a situation where an upside-down mug were placed in a hole so you don’t have to physically put your hand in the hole and once the ball hits the top of that mug protruding out of the hole the ball is considered as in the hole.

“We’re advised by government bodies that if you maintain that social distance then there’s no problem.”

Hayes said that particularly as many golf clubs had many middle-aged and elderly members, it was up to individual players to assess their own health situation before deciding to tee off.

However, he said golf also had the potential to reduce social isolation and allowed people to remain active in a relatively safe, outdoor environment.

“It’s important for not only the exercise aspect but for your spirit and your wellbeing to be outside whenever you can generally and at this time there aren’t many places you can go and continue your normal life safely.”

While memberships can run into thousands of dollars a year, golf clubs also rely on their bars and restaurants for a good portion of their revenue.

Hayes said by continuing to offer golf, clubs could still to deliver value for members.

“Golf clubs rely on membership and if people think they can’t play for months and months based on this then it will impact whether they choose to take up a membership and that’s going to hurt clubs as well,” he said.

“There’s a financial aspect to everything that clubs are confronting right now as with the rest of society.

“Clearly most clubs that usually operate bars and restaurants are going to be feeling the pinch and have probably laid off staff – or if they haven’t already it will probably happen soon.

“If golf activity that is safe permits them to make some sort of revenue then we think that is to be encouraged.” 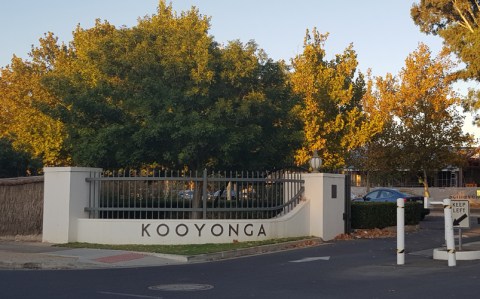 Kooyonga Golf Club announced on Wednesday it would close its course and practice facilities from midnight Wednesday.

Kooyonga Golf Club in Lockleys initially allowed play to continue and urged members to show their support for the club “in these challenging times”.

But an update on the club’s website from club captain Terry Anderson on Wednesday said the committee had decided “it would be socially irresponsible to keep the course open while even small social gatherings have been restricted”.

“To keep the course open would be incompatible with the intent of the Prime Minister’s instructions,” Anderson’s letter said.

“This decision is regrettable and has not been taken lightly. It was the Committee’s wish for the course to remain open as long as possible, but we now believe that we need to show leadership in the community and not put our staff and members at risk of infection, particularly given the age demographic of our membership.”

Kooyonga is the first Adelaide club to announce its course closure, as far as InDaily is aware.

As well as keeping its course open, Flagstaff Hill Golf Club announced on Monday it is trialling a takeaway food menu through its pro shop. Under the SAPOL and Clubs SA restrictions, pro shops can remain open but must not be used as a place of social gathering.

In a post on the club’s website on Monday, Flagstaff Hill general manager Joel Cross invited members to continue to enjoy the course.

“Golf is a sport which helps everyone remain active and one of the few social activities which complies with the social distancing requirements,” he said in the post.

Glenelg Golf Club General Manager Robert Vincekovic wrote on the club’s website on Tuesday that by its nature, golf promoted a level of social distancing and was a lower risk sport than many others.

“I would like to reiterate that the health and wellbeing of our members, staff and guests is of paramount importance. In saying this, the golf club may be the main or only source of social activity for some members,” he wrote.