The state’s arts and culture and creative industries have been badly affected by the ban on large public gathers and guidelines for social distancing, with the Adelaide Festival Centre and smaller venues temporarily closing to the public and many live performances cancelled.

The associated loss of income has raised fears for the future sustainability of arts organisations nationwide, along with the wellbeing of individual artists and those employed in the sector, which relies heavily on casual workers.

In a statement to the SA sector today, Premier Steven Marshall said it was “an unprecedented and challenging situation for the arts and cultural sector, and creative industries, in this state”.

“I want to assure you that the South Australian Government is committed to working with the sector on practical measures to reduce the impact of the inevitable disruptions that will occur in the coming weeks and months.”

Arts SA’s Jennifer Layther told InDaily that one of those measures would include increased flexibility regarding the use of funding approved through the most recent round of grant applications.

Money sought for a performance or tour that has now been cancelled, for example, might instead be used to pay the artists who have lost work or transferred to a different project.

“We will negotiate with the successful applicants about how they may use that money,” she said. “We will keep putting grant money out there in the sector but look to how it can relieve pressure.

“We think that that’s the only fair way to do it because of the effort that’s already gone into those applications.”

Layther said Arts SA was “working frantically” to gather data on the impact of the virus on the arts/creative sector, and wanted to worked with both organisations and individuals affected.

Earlier this week, addressing an emergency meeting of the Adelaide City Council, Premier Marshall said he had asked all cabinet ministers “to look at their budgets and to really think carefully about how we’re spending our money”.

“If you take something like the arts portfolio… very soon there will be no public art performances in South Australia so you’ve got to think to yourself… what is the best use of the arts budget for this year in terms of developing product or practice or collaboration or using different technology interfaces?”

He suggested the options that might be explored included the use of virtual reality, augmented reality, and the live recording of performances that could be made available on a pay-to-view platform.

“We can put a lot of effort within our budgets into professional development so that we can improve the capability of the arts sector in terms of running businesses going forward. These are the types of things we’re considering going forward.”

The Adelaide Symphony Orchestra has been talking to local production companies about the potential for live-streaming its concerts, including the scheduled April Town Hall performance Natsuko Plays Brahms, as an alternative to public performances.

Orchestra managing director Vincent Ciccarello told InDaily yesterday it would require a multi-camera set-up within the venue, with performances able to be viewed via a closed internet link.

“If it’s a way for us to expand the range of music we present and the way in which we present it so we can really value-add to concert-giving, that would be perhaps the greatest outcome, so it’s not seen as a replacement to live attendance at a concert but it provides an enhanced experience.”

However, it now seems unlikely the ASO will be able to proceed with the idea in light of today’s stricter guidelines and recommendations on public gatherings and social distancing.

Nonetheless, Layther said Arts SA would be supportive of innovative ideas that could help artists.

“I think the sector is really mobilising and it’s amazing to see it on a national level,” she said. 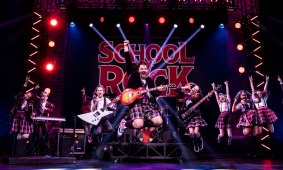 On a national level, the Australia Council for the Arts has said it is also looking to provide flexibility for those who have received funding for activities that have been affected due to COVID-19.

There have also been calls for a national stimulus package to support the arts.

A special national meeting of Cultural Ministers is being held tomorrow to discuss the challenges posed for the sector, and responses at a national level.