The biggest show affected by the closure of the AFC’s theatres, venues and bars will be the touring production School of Rock the Musical, which was to have run from this Friday until April 19.

The decision, effective from midnight, has forced the State Theatre Company of SA to cancel its upcoming season of The Gospel According to Paul – starring Jonathan Biggins as Paul Keating and due to open on March 24 – and the comedy-drama Single Asian Female. It also affects around eight other scheduled performances.

In a statement issued this morning, the centre said ticket-holders would be contacted directly and refunds for cancelled performances would be processed automatically without patrons needing to contact BASS.

“Above all, we are concerned for the safety of patrons, artists, staff and volunteers – and their families,” said centre CEO and artistic director Douglas Gautier.

“We deeply regret any inconvenience caused to our patrons and any distress to performers and the teams of people who work so hard to create and produce our shows.

“Our thoughts are with those in the arts and creative industries who will be most affected by this challenging situation.”

Many workers within the arts and entertainment industry are employed on a casual basis, and a worker on one of the suspended Festival Centre shows told InDaily she would now be unable to pay her rent.

“I feel relieved to have an answer – to know what’s happening – but I’m also very, very stressed about money. I don’t feel good,” she said.

“I’m probably going to have to borrow money from my parents to pay rent.”

The worker urged the Federal Government to consider compensating casual workers in the arts, retail and hospitality industries, who are particularly vulnerable to the economic consequences of the coronavirus pandemic.

Numerous South Australian arts and culture and music organisations and venues have been hit hard by the impact of COVID-19 and the associated ban on large gatherings and calls for social distancing.

State Opera SA announced yesterday it was postponing its planned outdoor epic Carmina Burana at Memorial Park Drive on March 27, as well as the May season of Rossini’s The Barber of Seville.

The Adelaide Symphony Orchestra has also been forced to postpone this Thursday’s sold-out performance at Thebarton Theatre of Ben Folds: The Symphonic Tour, and a Come and Play event at the Grainger Studio this Saturday. However, its Mozart at Elder concert at Elder Hall in early April will go ahead, because it will be presented to an audience of fewer than 500.

The ASO also plans to present its April Town Hall concert Natsuko Plays Brahms, part of the Master Series, without an audience, and is exploring the option of recording and broadcasting the performance.

The Art Gallery of South Australia has decided, “as a precautionary measure”, to suspend its public programs and members’ events – including daily guided tours, school visits and lunchtime talks – and its First Fridays, Neo and Start programs.

“AGSA remains open to the public – we recognise the important role that art can play in times of uncertainty,” it said in a statement. “The gallery’s café, Art Gallery Food + Wine, also remains open, as does the Gallery Store.”

Country Arts SA – which manages arts centres in n Whyalla, Port Pirie, Renmark, Mount Gambier and Noarlunga, and presents shows and exhibitions in more than 25 towns across regional South Australia – has suspended live performances in all its venues from midnight on Saturday until further notice

Country Arts SA chief executive Anthony Peluso said the decision was taken “to safeguard the health of our audiences, staff and regional communities”.

“The arts bring people together, and while we are practising social distancing, we still want to keep in touch through other means, so don’t hesitate to get in contact with us. We will continue to update the community and we will be here when it is time to move forward.”

Other SA arts organisations, events and venues affected include:

The national Media Entertainment and Arts Alliance is calling for targeted support for the sector, and has set up its own survey urging those who have had shows cancelled or lost work to share their story.

Many musicians rely on the income from live performances

The impact of event cancellations and postponements on Australia’s creative industries is also being tallied through a website called I Lost My Gig, which puts the total number of events cancelled so far at more than 20,000, with lost income of around $47 million.

Music SA general manager Lisa Bishop told InDaily that musicians and venues were being “deeply impacted” by the ban on live gatherings.

“Many musicians survive from gig to gig, and their typical sources of other income include hospitality work and teaching in schools, so there is a compounded loss of work.”

Bishop said Music SA took part in a teleconference yesterday with 42 other music stakeholders from across the nation – including venues, musicians and promoters – to discuss strategies “to help the industry survive the devastation and the awful one-two punch of the bushfires and COVID-19”.

“Musicians were among the first to jump in to support Australians who had suffered during the bushfires,” she said. “They performed for free at many fundraising relief concerts and now are facing a future of possibly unemployment, particularly since many musicians rely on the income from live performances.”

The Australian music industry is establishing working groups to deal with the fallout of event cancellations, while locally, Music SA will set up telephone consultations for musicians that can be booked through its website.

In the meantime, Bishop said there were a number of ways members of the public could support local musicians, including by: streaming music, buying merchandise and music, asking radio stations to play Australian music, subscribing to live streams of concerts, spending money from refunded concert ticket on future concerts, donating to artist fundraising, donating to support act / crew care, and writing to politicians to ask for venue tax relief and other cost-saving measures

More broadly, the arts and entertainment sector is encouraging people who have tickets to a live performing arts event which is cancelled due to COVID-19 to consider donating the cost of their ticket to the presenter rather than pocketing the refund.

In an announcement this afternoon outlining the response of SA arts organisation Vitalstatistix to COVID-19, director Emma Webb said the arts sector was going through “an unprecedented crisis”. 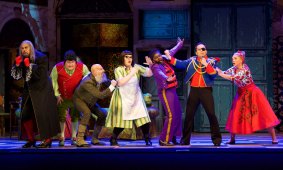 Virus bringing curtain down on SA arts and entertainment

She said Vitalstatistix fully supported efforts to secure emergency support assistance from federal and state governments, adding that “this crisis has made very clear just how precarious artists and arts workers are”.

The Melbourne-based Arts Wellbeing Collective has set up a free national Support Act Wellbeing Hotline, 1800 959 500, which is available 24/7 to anyone who works in the performing arts in Australia.