The Newstart payment issues comes as the Government prepares to move people onto the JobSeeker payment this week.

From March 20, the social security payment known as Newstart will be rebranded as the JobSeeker payment.

According to the Services Australia website, welfare recipients’ payment rates won’t change unless their circumstances change.

Low-income earners can see the next payment they should receive a fortnight before it is due, through the Government’s online system known as MyGov.

The online service also allows welfare recipients to make changes to their circumstances.

InDaily has seen screenshots from dozens of welfare recipients whose fortnightly payments after March 20 were short between $40 and more than $450, leaving people concerned about how they would be able to survive when they are moved onto JobSeeker payments.

The post said: “We’re aware some people’s future payments weren’t displaying correctly over the weekend. This has since been fixed. We apologise for any confusion or concern this caused.” 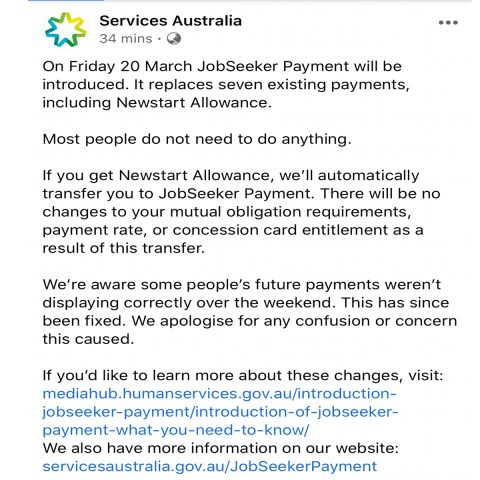 In response to concerns on Twitter over the weekend, Services Australia said the issue “doesn’t sound right … we’ll be looking into this urgently. We’d like to reassure you that when you transfer to JobSeeker Payment your payment rate will not change.”

However, welfare recipients who had already transitioned from Newstart onto the JobSeeker payments were also experiencing the issue.

Melissa Forbes told InDaily said she had moved onto the JobSeeker payment in February without any problems – until the weekend.

“I have lost hundreds of dollars. I am hearing it’s likely a glitch but if it isn’t, I honestly don’t know what I’ll do,” Forbes said.

“If it’s not, I honestly can’t even survive the next fortnight. I need to pay rent and bills and feed my pets. And myself I guess. Plus get my medications.”

Forbes said she had been on the payment while she looked for work but was limited in the type of jobs she could apply for due to health conditions, which included chronic hemiplegic migraines.

She said the migraines affected her without warning and left her entirely dependent on others.

“I am also light sensitive and have a lot of daily problems like headaches, double vision and parasthesia,” Forbes said.

“Ultimately, I want to find to find work I can do a few days a week so I don’t feel so useless.”

She said the stress was causing her symptoms to be exacerbated.

A screenshot of Melissa Forbes usual payments compared with her upcoming payment.

“There’s no information being given to ease people’s minds. People who are on Newstart should have received a text or an email or a letter through MyGov saying: ‘There’s been a glitch, please wait while we sort it out’,” Mercer said.

“It’s like people who are on benefits are so subclass that they should just be grateful for what they are getting. Rather than the fact that if people are missing money, they can’t pay rent, buy food or pay their bills.

“That stress for the next two weeks, even if it automatically sorts itself out, can make people sick.”

Bridgett Gallon said she had also noticed her payment was incorrect during over the weekend, but the problem had resolved itself this morning.

She said she had not received any government notification about her payment.

She is one of roughly 680,000 Newstart recipients who – as of September – were expected to transition onto the JobSeeker payment, at the same rate.

Last week, a spokesperson for the department – formerly known as the Department of Human Services and now known as Services Australia – said the rollover to a JobSeeker payment were “part of the Government’s commitment to making Australia’s welfare system simpler and fairer”.

The changes were initially announced during the 2017-18 budget.

The glitch follows the announcement of an Economic Support Payment which would provide welfare recipients including Newstart and Disability Support Pension a one-off payment of $750.

The payment, which has not increased in real terms in 25 years, is $555.70 a fortnight for a single person without children.

People would receive the payment from March 31 if legislation introduced later this month is passed.

The stimulus package is part of the Federal Government’s response to coronavirus.

A  spokesperson for the minister said the issue was a glitch but would not respond to further questions, directing InDaily to the minister for government services Stuart Robert.