Figures released this morning show the Festival has so far sold 81,446 tickets across 73 events – a 13 per cent increase on 2019 – with a total audience of more than 390,000 attending Adelaide Festival events (including WOMADelaide and free events).

With two days still to go, it has surpassed its box office target of $4.7 million, achieving a total box office income in excess of $5.3 million (excluding WOMADelaide).

The Festival set a new record last year with total box office income of just over $6 million, which was 32 per cent up on 2018.

Rob Brookman, who is retiring as executive director after the 2020 Festival, said audiences had not shied away from attending performances and events, with sales accelerating over the past week.

“These have been challenging times in which to mount a major public event and we have felt acutely conscious of the level of trauma and uncertainty from recent horrific bushfires to the COVID-19 pandemic that is unfolding in new ways every day,” he said in a statement.

“We are grateful to have tip-toed around a situation that, while extraordinarily difficult and disruptive, could have instead so easily resulted in cancellation.

“We feel deeply for our colleagues across the arts and cultural sector as they face down cancellations or postponements of performances, festivals and tours. We have been astonished by the resilience of our community and like to think that the Festival has provided many people with a kind of cultural anchor in uncertain times.”

Other Australian festivals and events have been hit by coronavirus concerns in the past week, with the cancellation of Tasmania’s Dark Mofo winter arts festival and the Generations of Jazz festival in Mount Gambier, and several international musicians pulling out of planned tours. The Australian Grand Prix in Melbourne this weekend has also been cancelled.

However, the uncertainty created by the virus has had little impact on Adelaide’s festivals, with record numbers flocking to Botanic Park for last weekend’s WOMADelaide, a number of Adelaide Festival shows selling out, and the Fringe on track for another box office record.

Most sessions of the AF’s Fire Gardens pyrotechnic installation at the Botanic Gardens (on until Sunday) have sold out, with other hot tickets including theatre centrepiece The Doctor and director Romeo Castellucci’s highly theatrical operatic take on Mozart’s Requiem.

The free opening weekend concert in Elder Park featuring Tim Minchin also attracted a capacity crowd, and the Festival’s schools program was the biggest in its history, with a 143 per cent increase in ticket sales compared with 2019.

Joint artistic directors Neil Armfield and Rachel Healy said 2020 – which marks the AF’s 60th birthday year – felt like one of their most successful festivals not only because of sales and attendance, “but because of the buzz in the air, the conversations in foyers and bars, on the streets and on social media, the palpable sense of occasion, of ideas, of creativity and of a sense that what’s on stage is reflecting the issues and ideas and debates of contemporary life”.

In addition to Fire Gardens, other shows over the closing weekend of the Festival include the Australian premiere of  Scottish Opera’s production of composer Missy Mazzoli’s opera Breaking The Waves, a nine-hour reading of Homer’s Iliad developed by the Greek-Australian actor William Zappa, and family-friendly clowning-mime-acrobatics show The Artist. 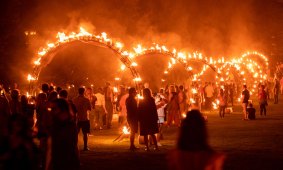 It is also the final weekend of the Adelaide Fringe, which has yet to release its latest box office figures but said last week that total ticket sales were up around 10 per cent on 2019.