The former public service high-flyer – who was placed on leave from his high-profile role as CEO of the Government’s urban renewal authority 18 months ago – faced the Adelaide Magistrates Court today charged with abuse of public office and acting dishonestly.

The former bureaucrats face charges relating to allegations they claimed travel expenses including airfares, accommodation and meals, for travel that was for private purposes.

Today’s court hearing marks the first time the pair can be identified in relation to a long-running inquiry by the state’s anti-corruption Commissioner Bruce Lander, which media have been unable to detail since the bureaucrats were placed on leave in September 2018.

A statement by Lander last week – which did not identify the defendants by name – suggested Vasilevski had been arrested on January 30 this year and charged with one count of abuse of public office and three counts of acting dishonestly.

Hanlon was arrested just last week, on March 5, and charged with two counts of abuse of public office, three counts of deception, one count of acting dishonestly and five counts of dishonestly dealing with documents.

Outside court, Hanlon told reporters he intended to “follow this matter vigorously through the court process”.

“I’m obviously constrained by what I can say,” he told assembled media.

“You all know I’ve been working on a number of major projects for the state, worth billions of dollars… those projects have required me to travel extensively, interstate and overseas.

“I’ve worked 24 hours a day, seven days a week for the state, and had oversight of a budget of hundreds of millions of dollars – to suggest I’ve fraudulently spent $24,000 on personal travel is nonsense.”

Both Whitington and David Edwardson QC, for Hanlon, expressed dissatisfaction with a 12 week adjournment requested by the public prosecutor to procure “telephone intercept evidence” and forensic handwriting samples.

Whitington told magistrate Jayne Basheer he was “concerned” about “how long this has taken”.

“It really has taken far too long,” he said.

Vasilevski was arrested on January 30 and charged with one count of abuse of public office and three counts of acting dishonestly.

“All four charges relate to a trip she took at the behest of her employer, for the purposes of furthering her role in Renewal SA,” Whitington told the court.

“She categorically denies any improper benefit.”

He indicated that the charges against her relate to the alleged misuse of allowances totalling $1032.60. 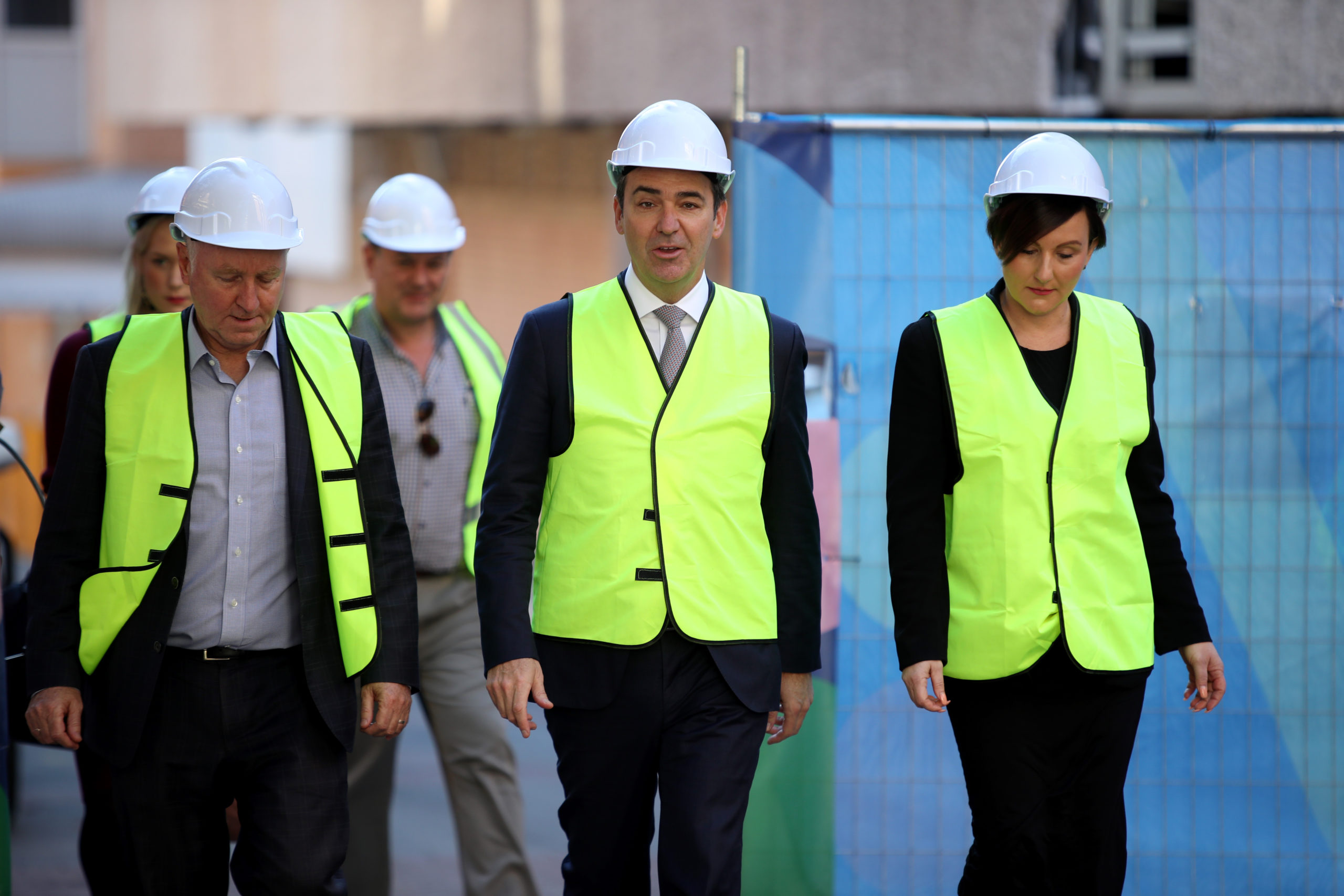 Hanlon (left) and Vasilevski (right) with Premier Steven Marshall at Lot 14 in May 2018, four months before the bureaucrats were placed on leave. Photo: Kelly Barnes / AAP

The pair’s fate has been shrouded in mystery since they were both forced onto indefinite leave in September 2018, with Planning Minister Stephan Knoll at the time refusing even to identify Vasilevski by name in a budget estimates hearing.

The high drama turned to high farce when Attorney-General Vickie Chapman subsequently invoked the spectre of ICAC in the mystery, distributing a media statement to confirm she had “enquired of the Independent Commissioner Against Corruption, Mr Bruce Lander QC, as to whether there is any further information that can be made available on this matter”.

“He confirmed that there is not,” Chapman said in the statement.

In a terse missive, Lander subsequently authorised media to publish Chapman’s statement but revealed in a statement to InDaily that he had expressly requested that “any statement made by the Attorney would not include reference to the ICAC and that the Attorney would say publicly that neither she nor the government could comment”.

The Attorney-General’s foray into proceedings led to a police inquiry as to whether she herself had contravened the ICAC Act, with the matter referred to the Director of Public Prosecutions – but no subsequent action was taken.

The Renewal SA pair have remained in limbo ever since. Hanlon’s contract expired in July last year, and was not renewed.

Just two weeks ago, Renewal SA indicated in a statement to InDaily that Vasilevski remained employed by the agency.

Renewal SA advertised a position for an ‘Executive Director, People and Culture’, prompting InDaily to inquire as to whether Vasilevski’s role as ‘General Manager, People and Place Management’ was finally being filled.

The agency responded that the new role was “a revised position replacing the [unrelated role of] Director, People and Culture who left Renewal SA in December”.

“Following the resignation of the Director, People and Culture in December to undertake a role in the private sector, there was an opportunity to review the requirements of the agency,” a spokesperson said in a statement.

“This resulted in the Executive Director, People and Culture position being recently advertised.

“The General Manager, People and Place Management remains on leave. The incumbent of this new role will report to the Chief Executive in the interim.”

Premier Steven Marshall today declined to comment on “a matter that’s before the courts”.