Three schools in NSW and Victoria will be shut on Tuesday after three students tested positive to COVID-19.

“School closures, I think, will become the norm as we go ahead, but we are doing everything we can to keep our children safe,” Federal Education Minister Dan Tehan told Nine’s Today program.

The minister was asked why schools were being closed for a day or two, while people with or suspected of having the virus are being told to self-isolate for two weeks.

“The schools have been closed for a day so they can be thoroughly cleaned,” he replied.

“That is the best medical advice that we’re being given at the moment. Now, if that changes and it says that schools need to close for longer, then schools will close for longer.”

Two Year 10 students from St Patrick’s Marist College and a Year 7 pupil from Willoughby Girls High School was on Monday confirmed to have COVID-19.

The fathers of the St Patrick’s students and the mother of the Willoughby student had previously tested positive for the virus.

Carey Baptist Grammar has been shut down after an adult member of the school community developed symptoms consistent with COVID-19.

Another Sydney School, Epping Boys High, reopened on Monday after closing on Friday after a Year 11 boy tested positive.

Across the country, more than 80 people have been confirmed as having the virus. More than half of the cases are in NSW.

Across the world, there have been more than 110,000 confirmed cases and more than 3801 deaths.

Elsewhere, federal Industrial Relations Minister Christian Porter will meet with unions and employer groups in Sydney on Tuesday to discuss the impact of the coronavirus on the economy and business.

Unions want the government to compensate Australia’s 3.3 million casual workers who don’t get paid sick leave if they have to self-isolate for up to two weeks. The workers are mainly in the retail, hospitality, health and aged care sectors.

“We don’t want people with virus or people with symptoms going to work, but they are going to have to choose between paying the bills and feeding themselves or going to work,” ACTU secretary Sally McManus warned on Monday.

Italian Premier Giuseppe Conte says travel restrictions and other strict public health measures will be imposed nationwide to try to stop the spread of coronavirus.

Conte said a new government decree will require people throughout the country of 60 million people to demonstrate a need to work, health conditions or other limited reasons to travel outside the areas where they live.

The restrictions will take effect on Tuesday and, like those already in place in northern Italy, will last until April 3, he said.

“There won’t be just a red zone,” Conte told reporters referring to the quarantine order he signed for a vast swath of northern Italy with a population of 16 million over the weekend.

“There will be Italy” as a protected area, he said. 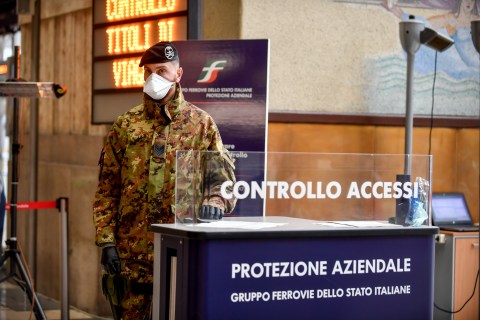 The nationwide decree also extends school closures in Italy until April 3. Schools in the centre and south of Italy that were closed because of the virus had been slated to reopen on March 16.

Italy registered 1,807 more confirmed cases as of Monday evening, for a national total of 9,172. With those numbers, Italy again overtook South Korea as the country with the most cases outside China. The number of people with the virus who died increased to 463.

The premier also took to task young people in much of Italy who have been gathering at night to drink and have a good time during the public health emergency that started on February 21.

“This night life … we can’t allow this anymore,” Conte said.

Under the weekend decree that applied to regions in the north, pubs, restaurants and cafes are required to close at dusk. Now the mandatory early hours will affect all of a locked-down Italy.

Israel will require anyone arriving from overseas to self-quarantine for 14 days as a precaution against the spread of coronavirus.

With 42 confirmed cases of the virus, Israel has already taken some tough counter-measures, forcing visitors from many countries in Asia and Europe into home isolation.

The virus has hit travel and trade, with tourism in particular expected to suffer.

“Anyone who arrives in Israel from abroad will enter a 14-day isolation,” Prime Minister Benjamin Netanyahu said in a video statement.

He said the new measures would be in effect for two weeks initially.

“This is a difficult decision. But it is essential for safeguarding public health, and public health comes first.”

Government officials said the order would come into force immediately for Israelis returning to the country.

From Thursday, any non-Israelis seeking to enter the country will have to prove they have the means to self-quarantine, the officials said.

Palestinians in the Israeli-occupied West Bank have also been hit by the virus, reporting 25 confirmed cases. The Palestinian Authority (PA) has turned foreigners away at checkpoints and ordered schools and national parks closed.