Brett Dean arrived in Adelaide from Taiwan on Tuesday this week.

He is the seventh confirmed case of the COVID-19 coronavirus reported in Adelaide.

SA’s Chief Public Health Officer Nicola Spurrier said he was at the RAH and “he is in the very best place for having his treatment”.

“He’s having the best care possible,” she told reporters this afternoon.

More than a dozen other South Australians are awaiting the results of tests for coronavirus.

Spurrier urged people to stay away from public gatherings if they have flu-like symptoms.

She said anyone who finds themselves in public with symptoms should use good hygienic practises, like hand-washing, and coughing or sneezing into one’s elbow.

Premier Steven Marshall yesterday confirmed that the infant baby of a 40-year-old Adelaide woman, recently returned from Iran who was confirmed to be carrying the virus, had also tested positive.

Spurrier said today that both the mother and the baby are “doing well”, adding that children and infants seem to be less vulnerable to the virus than other people.

A Flight Centre Mount Barker travel agency was closed yesterday in connection with the coronavirus.

Seven News Adelaide reported that a 24-year-old woman who worked there is now in hospital after being diagnosed with the virus after a recent return from Italy.

Brookman said Dean had not attended rehearsal or had any contact with the Adelaide Symphony Orchestra since he became ill but that a small number of people that had come into contact with him were isolating themselves as a precaution.

“He’s not been in touch with the orchestra and he’s only actually seen a tiny number of people, and the three relevant people have placed themselves in self-quarantine,” said Brookman.

“The members of our staff that are affected are still working away online.”

As of this morning, none of the people with whom Dean has been in contact has developed COVID-19 symptoms.

Conductor Richard Mills has been called in to replace Dean for Saturday evening’s performance.

“We were very fortunate that we were able to get Richard Mills, who is one of the country’s best conductors, to step in at short notice,” said Brookman.

“He had a gap in his diary, which was pretty amazing.

“He has already spent a day rehearsing with the orchestra.”

Brookman said there had yet to be any impact on Adelaide Festival ticket sales and that there was no risk to the public from attending The Sound of History.

“People don’t seem to be spooked by it at this point,” he said.

“(However) we’ve had some artists from overseas contact us – ironically from some countries that have got more cases than we have.

“Yes there is some unease: we had a couple of people withdraw from Writer’s Week saying they just felt uncomfortable about travelling at this time.”

Australia has recorded 60 cases of COVID-19 infection and two elderly people have died from the virus.

Globally, the virus has spread to more than 60 countries.

Spurrier told reporters today that, “we know now that people, regardless of where they’re travelling in the world, there is now a higher risk” of coronavirus transmission than there had been earlier.

“It is evolving and it’s important for people to keep up to date using the Smartraveller advice.”

Mainland China had 143 new confirmed cases of coronavirus infections on Thursday, the country’s National Health Commission has reported, up from 139 cases a day earlier.

That brings the total accumulated number of confirmed cases in mainland China so far to 80,552.

The death toll from the outbreak in mainland China was 3,042 as of the end of Thursday, up by 30 from the previous day.

Australia has recorded 60 cases of infection and two elderly people have died from the virus.

Chief Entrepreneur self-quarantined, but it was just a cold

South Australia’s Chief Entrepreneur Jim Whalley told InDaily he quarantined himself at home this week, concerned there was a small chance he may have contracted the COVID-19 coronavirus during a trip to Singapore last month.

Whalley said he drove to his general practitioner with flu-like symptoms on Wednesday afternoon, where he was instructed to stay in his car before a medical professional emerged in full protective gear to take nose and throat swabs.

He has been isolated in his home since.

But after all that it was a false alarm – Whalley was told this morning that he has the common cold.

Meanwhile, travel agents in South Australia are dealing with an influx of cancellations and re-bookings as fear spreads over the outbreak.

SA travel industry veteran Phil Hoffmann told InDaily yesterday that he’d seen a reduction in bookings since late January, but that the coronavirus crisis was “being blown out of proportion”.

“We have seen cancellations which have hurt us,” said Hoffmann.

He said many suppliers, especially cruise ship companies, were showing understanding towards travellers by waiving penalties for late re-bookings or cancellations in the wake of the crisis.

“The cruise liners have been very good at giving refunds,” he said.

We think it’ll return to business as usual quite quickly … once the mad publicity dies down.

But he said most travel insurance policies do not cover cancellations in the current circumstances, unless the travel was to China and booked before the coronavirus threat emerged.

“If they cancel and there’s no sort of ‘no go zone’ declared (for the country they to which they are travelling) … they’re not actually covered by insurance,” said Hoffmann.

“Most travel insurance policies don’t cover this sort of thing” 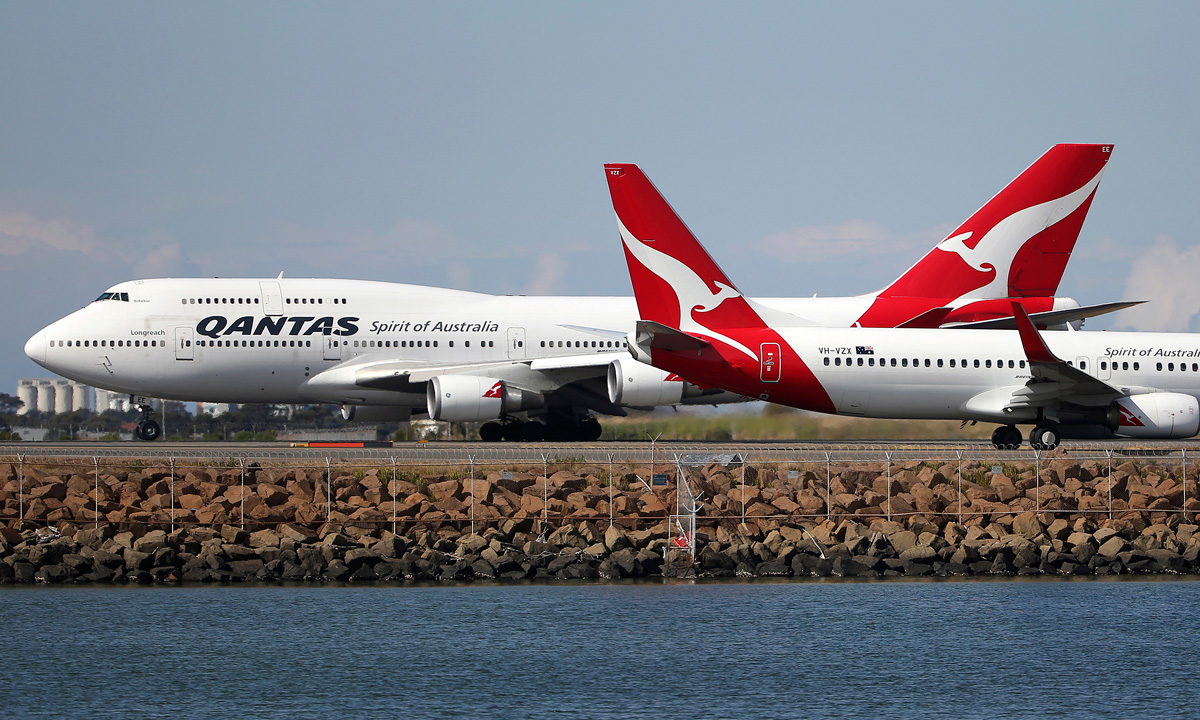 But he said experience with previous major disruptions – such as the September 11 2001 terrorist attacks and the 2003 SARS epidemic – told him the travel industry would bounce back quickly once the immediate crisis has subsided.

“As an industry, we’ve been here before,” he said.

“We think it’ll return (to business as usual) quite quickly … once the mad publicity dies down.

“There are still a lot of destinations in the world (available to travellers). In many places, you’ve got as much chance (of contracting the virus) as in Australia.”

“While there has certainly been a slowdown in activity, people are still travelling and are looking at destinations that have not been significantly impacted to date … (including) Australian domestic holidays, South Pacific, NZ, the UK  and the Americas,” he said.

“We have started to see some really cheap fares hit the market, for both domestic and international travel.

“Fares to the USA, in particular, have been heavily reduced in recent weeks and they seem to have been successful in stimulating activity.”

Qantas will cut more international flights this month as it grapples with falling demand.

The latest cuts to destinations including Tokyo, Sapporo, Osaka, Hong Kong and Auckland are on top of its grounding the equivalent of 18 planes as it cut international and domestic capacity last month.

“The coronavirus situation and its impact on international travel demand is evolving and we’re monitoring closely,” the airline said in a statement today.

The company has not closed higher on the ASX since February 20 and its share price has shed about 35 per cent since hitting an historic high of $7.46 in December, a $3.94 billion reduction in market capitalisation.

Petrol prices in Australia have dropped, with oil demand hit hard by the coronavirus outbreak.

Original forecasts for growth in crude demand in 2020 have been slashed, as factory operations, travel and other economic activities around the world have been curtailed by measures aiming to stop the virus spreading.

The Executive Board that governs the Anangu Pitjantjatjara Yankunytjatjara Lands in the state’s far North-West has enacted new entry restrictions to prevent any spread of the virus there.

For the next three months, the APY will not issue entry permits to anyone who has visited China, Iran, South Korea, Japan, Italy or Mongolia since 1 February 2020, or has been in contact with someone confirmed to have the novel coronavirus.

Anyone in the aforementioned categories would have to submit a copy of negative coronavirus test results and a statutory declaration in order to be considered for a permit.

APY General Manager Richard King said the APY community was particularly vulnerable to the virus because of poor health and living conditions.

“We need to be vigilant and follow these guidelines in order to protect Anangu from this virus,” he said.

There have been no known cases of COVID-19 among APY Lands residents to date.

The number of NSW coronavirus cases has more than doubled in a week after a Sydney high school was shut down after a Year 11 student tested positive.

Almost 1200 pupils at Epping Boys High School have been affected by a state government decision to impose a 14-day quarantine period, meaning students and school staff should stay at home.

NSW Health Minister Brad Hazzard on Friday implored parents to not panic and said the ill student was “not bad, but he is not well”.

“We expect over the weekend there will be a detailed examination of where the student has been since he contracted the virus and with whom he has been in contact,” Hazzard said in a statement.

Some 25 people have been diagnosed with COVID-19 so far, including a Goulburn man who returned from Singapore and travelled to Darwin. Nine of the 25 cases were a result of local person-to-person transmission.

“So it’s almost tripled just in a week,” Hazzard told the Nine Network.

Meanwhile, 17 children are being tested after they visited a Sydney aged care facility where an elderly female resident, 95, died earlier this week and was later found to have been infected with the virus.

NSW Chief Medical Officer Dr Kerry Chant has warned more residents at the facility could be diagnosed with the virus.

Chant also told aged care facilities to stop hosting children from child care centres to reduce the risk of infection for Australia’s most elderly and frail.