According to the Bureau of Meteorology’s 2018-19 national performance report for urban water utilities, SA Water released 52 per cent more greenhouse gas emissions in Adelaide compared to the previous year – the highest increase recorded for an Australian capital city.

The report states the massive one-year increase was a result of “extra demands” caused by last year’s drier summer and winter, which required more pumping from the River Murray than in previous periods.

In 2018-19, SA Water released 434 net tonnes of carbon dioxide per 1000 properties in Adelaide – the second highest figure for a capital city behind Perth’s 510 net tonnes.

The data follows a record-breaking summer, with Adelaide hitting 46.6 degrees in January last year – the hottest temperature recording in any Australian capital city since records began more than 80 years ago.

According to the Bureau of Meteorology, rainfall totals for the 2018-19 summer and winter were below average throughout Adelaide and the Hills.

Both the Bureau of Meteorology and the state’s Environment Protection Authority correlate the warmer and dryer conditions to the effects of climate change. 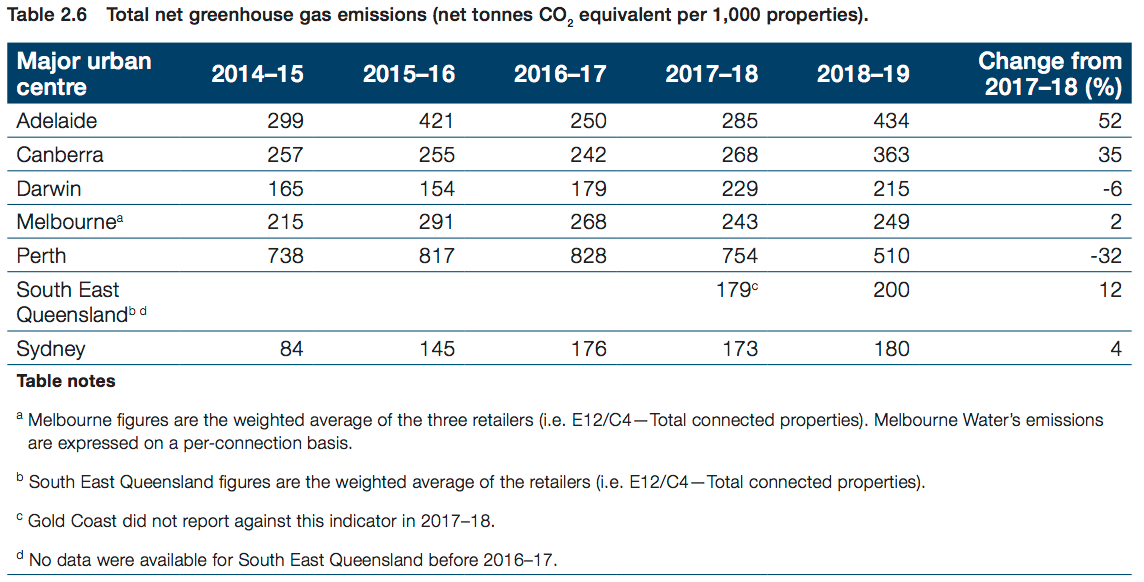 In a statement to InDaily, an SA Water spokesperson said that increased greenhouse gas emissions in 2018-19 were caused by electricity used for higher energy-intensive pumping resulting from dry conditions.

The spokesperson said the agency was making “good progress” towards reducing its carbon emissions by more than 89,000 tonnes per year by increasing renewable energy generation and storage.

“Our program to pursue a zero cost energy future is recognition of the need to reduce our environmental footprint while sustainably lowering operational expenses,” they said.

The spokesperson said the agency had committed in 2017 to install 500,000 solar panels at around 35 SA Water sites across the state.

Latest figures from the state’s Environment Protection Authority show the number of days reaching over 40 degrees in Adelaide has more than doubled in the past 10 years, with the Bureau of Meteorology forecasting maximum daily temperatures for South Australia will rise by between 1 and 2.1 degrees by 2050.

Meanwhile, annual and spring rainfall across South Australia is projected to decline by between five to 15 per cent by 2050.