Duluk today gave a statement to InDaily, after being asked for comment on a letter from Greens Legislative Councillor Tammy Franks.

Franks yesterday wrote to the parliament’s most senior representatives – including Premier Steven Marshall, Opposition Leader Peter Malinauskas, Speaker Vincent Tarzia and Upper House president Andrew McLachlan – requesting Duluk be “removed” from a parliamentary committee they sit on together because of ongoing tensions stemming from his alleged actions at the December 13 event.

In response, Duluk sent InDaily a statement saying: “Having attended Christmas functions on the afternoon and evening of 13 December at which I had consumed alcohol, I made an error of judgment in choosing to join a number of my parliamentary colleagues for Christmas drinks at Parliament House late that night and engaged in behaviour which was unacceptable on any view.”

“I deeply regret that my behaviour caused offence and distress to others,” he said.

“I subsequently conveyed my personal apologies to those concerned, including [SA Best MLC Connie] Bonaros and Ms Franks.

“I am embarrassed by the incident. I am embarrassed to think that others might consider my behaviour on that evening is consistent with my character and values, which it was not.

“The incident has caused me to recognise that I should seek professional help in relation to alcohol use and I am doing so.”

Duluk said that in addition to resigning as Chair of the Economic and Finance Committee, which he did last week, “I will be taking further steps in relation to this matter by stepping aside from all my Parliamentary Committee positions that I hold pending the outcome of any investigations.”

An independent inquiry is set to be announced by the Speaker, as revealed yesterday by InDaily.

Duluk also sits on the Aboriginal Lands Parliamentary Standing Committee and the board of Reconciliation South Australia, according to his website.

“I have assured the Premier and the Speaker that I intend to fully co-operate with any investigation thought necessary and appropriate and I take this opportunity to publicly reiterate my apologies to those whom I offended that night,” he said.

Duluk had already issued a public apology to Bonaros “and anyone else who was offended by my actions” after claims were aired that he slapped her on the behind during the crossbench-hosted Christmas party and later sent her an unwanted text message.

Franks, who was at the party but did not witness that alleged incident, asserts in her letter that “my own observation of certain offensive behaviours” led to her “demanding on that night that he cease these offensive behaviours… and asserting that he was not even invited to the event so that he should leave”.

“Among many other things, he had stormed into the space flanked by at least one other man and I had observed him lean over and lift a tub chair with Ms Bonaros still in it front on which I did not interpret to be something she was comfortable with,” she alleged.

She noted her actions were prompted by “visual cues” including other attendees’ “distressed body language”, but “not upon what I had heard”.

“The ensuing discussion on the night between he and I became quite heated,” she wrote in the letter, which has been obtained by InDaily.

“He challenged me ‘don’t be like that’ and asserted that he was my ‘neighbour’ in [parliament’s lower ground office] corridor and that according to him I ‘walk past his office everyday’ so he should therefore be allowed to remain at the drinks event,” she wrote.

Franks acknowledged Duluk called her “on the morning of December 19… to apologise for his behaviours” at the event.

“At the time I accepted his apology to me on face value [and] we also spoke of his need to apologise to others,” she writes.

However, after subsequent discussions with fellow attendees she aired further claims of comments allegedly made by the Waite MP to a staff member at the event. InDaily has chosen not to publish the alleged comments, but Franks said hearing the account “both disgusts and repulses me”.

“It literally made me feel physically sick and to shake upon it being recounted to me,” she writes.

“I was relieved to have the Christmas holiday break away from the Parliament building and have been reflecting this week on my growing levels of anxiety and discomfort in re-entering the workplace following the events that took place on December 13th.

“I felt physically ill on entering the building this past Monday.”

She said her anxiety was heightened by the prospect of being in close proximity with Duluk, with both MPs having served on the Aboriginal Lands Standing Committee, which regularly travels to remote communities for its work.

“I note this Committee travels to remote and regional areas, usually over periods of several days,” she writes.

“Typically the travel is in confined spaces with little private respite and with shared meals (and) co-located accommodation.” 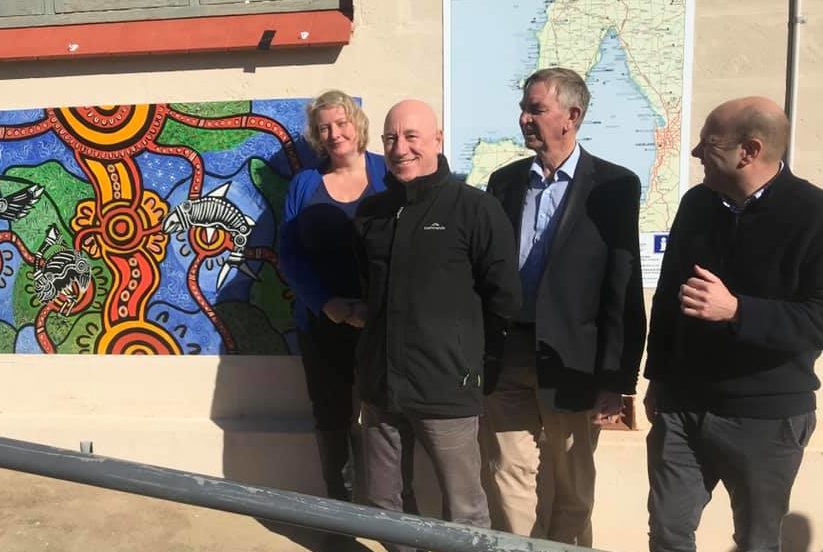 Members of the Aboriginal Lands Committee, with Franks on left and Duluk far right. Photo: Facebook

In the letter, which was also sent to committee chair and Liberal MLC John Dawkins and shadow minister for Aboriginal Affairs Kyam Maher, Franks writes: “My direct and immediate request is that the Member for Waite be removed from the Aboriginal Lands Parliamentary Standing Committee.”

“Failing that, if we are to travel, that I have first call on participating in that travel and he be required to opt out if I am going,” she adds.

Duluk has now stood aside from the committee after InDaily sent him Franks’ comments seeking a response.

But the Greens MLC went further, alluding to concerns that have arisen regarding conduct by others and alleging that “cumulative and long-standing harassing behaviours in this toxic workplace has exacerbated my distress and disgust”.

“I will not let it slide this time as the standards in this workplace simply must be set higher than they have been,” she writes.

Franks said she intended to detail her account “to whatever independent inquiry occurs in the coming weeks”.