InDaily revealed yesterday that the council declined to offer Singaporean company Beam a renewed permit to operate e-scooters in the CBD from February.

The council instead handed a permit to fellow Singaporean company Neuron and renewed the permit of yellow e-scooters company RIDE, which is registered in Australia, following an expressions-of-interest process.

Now, InDaily can reveal the contents of an explosive letter from the CEO of Beam, Alan Jiang, to council CEO Mark Goldstone, outlining a series of allegations regarding the council’s handling of the expressions of interest process and its enforcement of existing e-scooter permits.

The letter also contains allegations that RIDE engaged in misleading and deceptive conduct by describing itself as an “Australian owned and operated” company despite the fact that it is majority-owned by a shareholder registered in the United States.

It also accuses the council of failing to take convictions of Neuron in Singapore into account in the expressions of interest process, and of breaching confidentiality during the process.

InDaily understands the alleged breach of confidentiality relates to information said to have been disclosed by council to the Adelaide Fringe Festival.

Beam is a sponsor of this year’s festival.

“I have requested a review of the Expression of Interest process and this review is now underway,” Goldstone told InDaily in a statement this morning.

“Once completed, the City of Adelaide will communicate with Beam and confirm what, if any, further action may be required.”

Jiang’s letter accuses RIDE of misleading people in relation to the company’s ownership.

“RIDE has purported to council, to the media and to its customers that it is a local Australian Company with its headquarters in South Australia,” the Beam CEO writes.

“Ride is not an Australian Company.”

RIDE’s website claims that it is locally owned and “the money you spend with RIDE stays in the very same neighbourhoods that you live in”.

An extract from corporate watchdog ASIC for the company, Ride Transportation Solutions Pty Ltd, shows that all 10,000 of its shares are owned by Aaron Weinberg, registered as living in San Rafael, California, US.

One of the company’s two directors is Joshua Cooper, who is registered as living at the same address as Weinberg, in California.

The other director is Quentin Keith Rutgers, of Dandenong, Victoria.

The company is registered at Rutgers’ Victorian home address.

In an interview with InDaily this morning, RIDE CEO Tom Cooper, said the company “has an Australian director, an Australian CEO (and is) Australian controlled”.

“All decisions are made in Australia.

“It’s clearly just a mud-throwing contest,” he added, alluding to the letter. 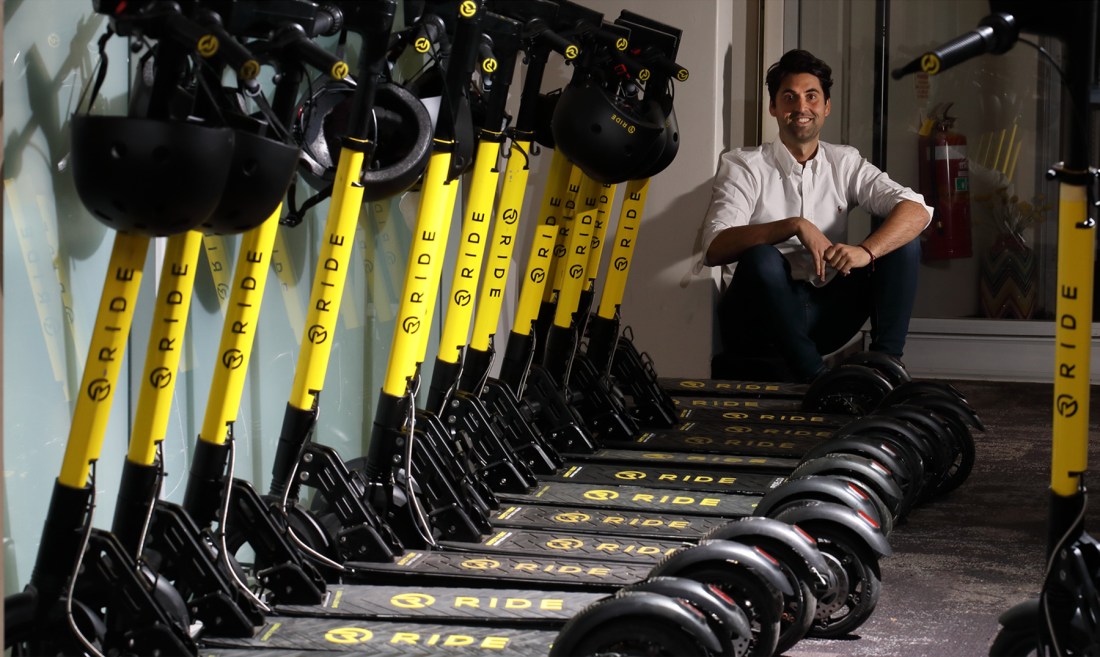 Jiang’s broadside also accuses RIDE of failing to meet the requirements of its permit on two counts: by allowing its scooters to reach speeds of 18km/h and by failing to keep the required number of scooters on the streets.

“Beam has had a number of conversations with city officials where it has been accepted that Ride has never met the permit requirement to deploy at least 90% of the maximum 500 scooters are deployed at all times,” the letter reads.

“It is our understanding that Ride has at best deployed 400 scooters and regularly deploys around 300 scooters.

“In addition, during the trial period, Ride had several days with zero deployed e-scooters.”

The letter says Beam has provided two thirds of all Adelaide e-scooter trips during the current permit period – since early last year – mainly because RIDE has failed to keep enough scooters on the road.

A Beam e-scooter, left in an underground Grenfell Street car park. The distinctive purple-hued scooters will be removed from city streets by the end of the month after failing to secure a renewed permit. Photo: Bension Siebert / InDaily

“During the previous nine months Adelaide, which clearly demonstrated a desire for 1000 e-scooters, has been underserved – in awarding Ride a tender they (the council) are accepting a significant under service will continue,” it reads.

“It is highly irregular to ignore the fact that a provider has failed to meet the existing vehicle supply quota and has never been compliant with the permit requirements.

“Beam had undertaken 2/3 of the total trips (data from council) undertaken in Adelaide during the current trial because it has met its vehicle supply quota and Ride has not.”

Jiang calls for an immediate investigation into the expressions of interest process, and for the CEO to declare it invalidated.

“These matters alone give rise to the need for an immediate investigation into the conduct of the decision making with respect to the EOI and the oversight of the existing permit for the current trial by council,” the letter reads.

“There is sufficient evidence to suggest that because the process agreed to by council was not followed, because the existing trial permits have been enforced in a prejudicial and inequitable fashion, and because council … did not adhere to the requirements of its own policies that the entire process was corrupted and should be set aside and deemed invalid.”

Cooper declined to comment on allegations that the company had failed to meet its permit obligations by keeping too few scooters on the road, but he said he was not aware of any instance in which RIDE scooters operated at 18km/h.

He also declined to confirm whether his understanding of the current permit was that it required RIDE to keep 90 per cent of the 500 maximum scooters on the streets at all times.

But he said his company had been “in close contact with the council over that”.

“We’ve had discussions with the council about the amount of usage,” said the RIDE CEO.

“There has been no issues with that they have reported to us.”

He said the number of scooters RIDE kept of the road was “confidential in nature”.

He added that RIDE was excited to have won the new permit, which runs from February this year until February 2022.

“We’re really excited to be operating in Adelaide,” he told InDaily.

“It’s a reward for all the work that we’ve done over the last nine months in making sure that we are a really professional operation.”

The letter also outlines alleged convictions of Neuron in Singapore and argues that these should have excluded Neuron from the expressions of interest process.

According to the letter, Neuron was “found guilty in Singapore of ‘providing services at public places without a licence or exemption’ under the Parking Places Act”.

“Court transcripts indicate that, despite being advised by the regulator, the Singapore Land Transport Authority, that it was operating (e-scooters) without a licence, Neuron failed to cease operations that contravened the law and ignored the lawful instructions of the LTA,” it reads.

“(The company) was found guilty of 19 offences and it was ordered to pay $38,000 in fines. It was also prevented from operating in its home jurisdiction of Singapore.”

InDaily has contacted Neuron for a response.

UPDATE: According to an article in Singapore publication The Straits Times, one of Beam’s e-scooters and 26 of Neuron’s e-scooters were impounded by the Singaporean Land Transport Authority in November 2018 because they were reportedly placed on public land in contravention of the city state’s Parking Places Act.

A spokesperson for Neuron told InDaily on Tuesday evening that the company had been a pioneer of electric scooter transport in Singapore in 2017, and in mid-2018, the Land Transport Authority “changed the rules regarding licencing use on public land”.

“However the LTA did not immediately provide a mechanism to secure a licence until January 2019 and so Neuron – as well as other operators – were left in a regulatory no-man’s-land for a few months.

“You may have seen references of ‘impounded e-scooters’ – these relate to e-scooters that were not parked in authorised areas during this time.”

The spokesperson stressed that it was a “unique situation” in Singapore and that “in Adelaide we have worked closely with the Council to meet all of their requirements and look forward to running a safe and successful operation”.

Beam and the Adelaide Fringe Festival

Beam is a sponsor of the Adelaide Fringe Festival 2020.

Jiang’s letter accuses the council of informing “a third party” about the outcome of the expressions of interest process before it was made public.

InDaily understands the Fringe is that third party.

“Beam has been contacted by 3rd parties that are commercial partners of Beam, who have advised Beam that they have been told the outcome of the EOI … by the City of Adelaide,” Jiang’s December 23 letter continues.

Beam e-scooters to be banished from Adelaide CBD

“Beam considers it is highly irregular and inappropriate that the council has released this information to organisations that are not a party to the current permit or the EOI and doing so has been damaging to Beam’s commercial operations.”

InDaily has contacted Beam and the Adelaide Fringe Festival for comment.