It comes as a convoy of army vehicles with up to 100 reservists today heads to Kangaroo Island and a new recovery centre at Lobethal opens for residents impacted by the Cudlee Creek bushfire in the Adelaide Hills.

The Kangaroo Island blaze, which has burnt more than 155,000 hectares inside a 300-kilometre perimeter, is still active on the island’s western end with authorities concerned about deteriorating weather conditions later this week.

Meanwhile, strong and erratic winds late yesterday afternoon also prompted increased fire activity and smoke around the eastern edge of the island, with a bushfire advice message currently in place.

Work to assess the full extent of the damage and help locals get back on their feet is underway with the army personnel and supplies to arrive in Penneshaw today.

Work is also underway to restore power supplies with about 600 properties still without electricity.

SA Power Networks says customers may be without services for an extended period while the damage to equipment is determined.

It says only a portion of the affected area has been inspected so far and crews have already identified 12 kilometres of lines brought down.

Some mobile phone and landline services in parts of Kangaroo Island are down, with Telstra advising it is working as quickly as possible to restore connections.

Cooler weather and some rain across the fireground on Saturday and Sunday brought some relief but the Country Fire Service declared a total fire ban for Monday in the wake of a number of flare-ups and the prospect of rising temperatures from Wednesday.

A “watch and act” alert was issued for Stokes Bay near Lathami Conservation Park on the island’s north coast early on Monday as a scrub fire threatened the area.

A large number of homes, farms and other buildings are thought destroyed along with tourism and service infrastructure.

Premier Steven Marshall was in the Adelaide Hills town of Lobethal this morning to open a new recovery centre for residents impacted by the December 20 Cudlee Creek bushfire.

The most important thing, quite frankly, is the need for money

That fire claimed one life and destroyed 85 houses, over 400 outbuildings, 200 vehicles, and 5000 livestock.

The impact on native wildlife is still unknown.

The Lobethal recovery centre, located at the Frabrik Arts and Heritage building at 1 Lobethal Road, will replace existing centres at Highbury and Mt Barker, and will provide emergency accommodation, mental health support and financial counselling to impacted residents.

“This is the tip of the iceberg of support that we will be providing to those people affected by bushfires across South Australia,” he told reporters this morning.

“I’ve called an extraordinary cabinet meeting today where we can get the entire cabinet together to work on the coordinated plans for recovery in South Australia.

“We will be doing everything we can to get these two communities back on their feet as quickly as possible.”

Today, we’re at the opening of the new Lobethal Recovery Centre for people affected by the Cudlee Creek fire.

It’s a one-stop-shop for the community to ensure they get the help and support they need in the coming weeks & months.

We’re with the community every step of the way. pic.twitter.com/5zrKcESbar

Marshall said he would seek to extend the state emergency relief fund to cover the Kangaroo Island community during today’s cabinet meeting.

He said he had also been working with the Federal Government and would announce plans “in the coming weeks” outlining “exactly and precisely what we’re going to do to rebuild those (bushfire affected) communities”.

“The most important thing, quite frankly, is the need for money,” he said.

“We have extra problems in Kangaroo Island if you like because we’ve got a population there of about 4500 people that are very dependent on their two critical sectors – agriculture and tourism.

“They’ve lost their job because if the business that they’re working for goes out of business they can’t go down the road and get another job like you can on the mainland.” 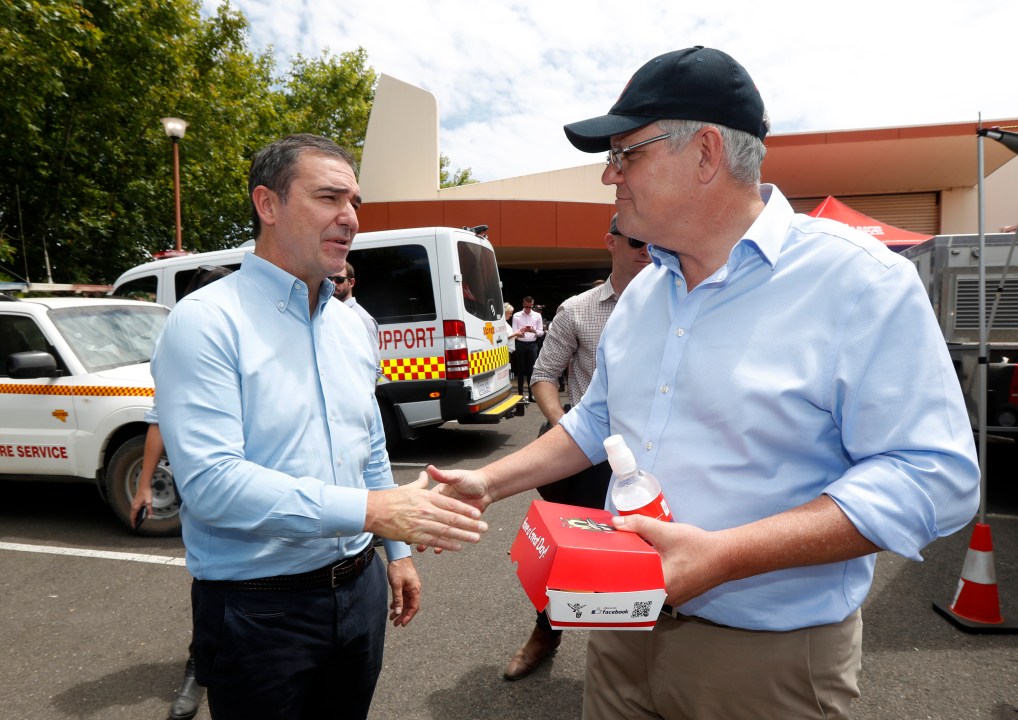 Tourism Minister Simon Birmingham told FiveAA this morning that tourism was worth around $126 million to Kangaroo Island in 2018 and it was important to rebuild infrastructure and confidence to ensure visitors kept coming.

Meanwhile, Adelaide Hills Council mayor Jan-Claire Wisdom flagged she would approach the State Government for extra funding to deal with a “huge amount” of rebuild work required across the region.

“Our surplus has probably disappeared very quickly in the first ten minutes,” she said.

“We will probably be asking (the State Government) for money, but we will be working with them because there are mechanisms for getting grants and things, but the bigger things can be infrastructure and for us there’s a huge risk of trees (falling) still.”

Stringer told InDaily the Cudlee Creek fire had “decimated” about one third of wine production in the area, with that figure likely to grow as fruit becomes tainted by lingering smoke.

“It’s still very, very devastating because coming off the 2009 vintage, which was 50 per cent down on yields, growers are now facing this,” he said.

“Crop insurance is not feasible (because) a lot of premiums are too high and companies are not willing to insure for large plots.

“A lot of growers are saying they can’t get in touch with their bank manager because of the Christmas holidays.

“We really need the government to step in and assist growers get back up on their feet.” 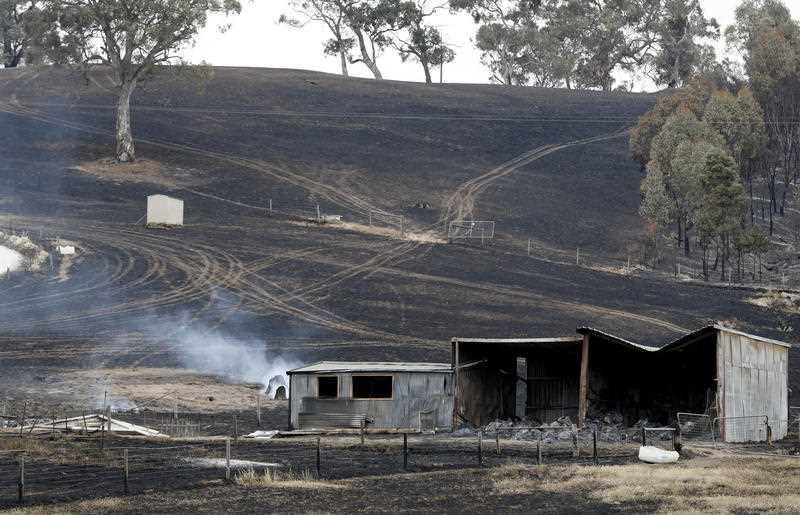 A burnt shed and scorched earth at Woodside in the Adelaide Hills. Photo: Kelly Barnes / AAP

“You cannot underestimate the debilitating effect of… the impact of mental health on these people when they’re trying to rebuild confronted with total loss of all those things that mean so much to us – the photographs that we put into boxes to keep safe for our children, the posterity, it’s all gone,” he said.

“You cannot expect people to rebuild their lives automatically.

“I can’t reinforce enough that it’s up to all South Australians now to show their support for the Adelaide Hills because they have suffered for many, many weeks.”

In NSW, two people are missing as hundreds of people brace to discover the fate of their homes.

Showers have brought some relief to firefighters but the Rural Fire Service warns the rain won’t put out the largest and most dangerous blazes before conditions again deteriorate later this week.

At least 60 homes were destroyed in Saturday’s blazes, taking to 576 the number of houses razed since New Year’s Eve.

RFS commissioner Shane Fitzsimmons on Monday told reporters two people are missing after Saturday’s fires – one south of Bombala and another to the west of Bedalla, both in southern NSW.

Police and emergency services are attempting to locate the two people.

More than 135 bushfires were burning across NSW on Monday, including almost 70 uncontained. Almost 2500 firefighters are in the field.

“I don’t think it will be too long before we are up over five million hectares of largely forested country burning along the Great Dividing Range from the Queensland border to the Victorian border,” Fitzsimmons said.

“Overnight, with some of the thunderstorm activity, we have seen localised shower activity and we are expecting to see some of that over the coming days and less so once we get through to warm conditions later in this week.”

In the far south, Eden residents were able to return to their homes on Sunday as crews continued to battle the border fire which has scorched 271,000 hectares since igniting west of Victorian town Mallacoota.

We just have to get in there, start to rebuild and start getting on

Fire danger ratings on Monday will be high or low-moderate across much of the state, with only parts of the state’s north experiencing “very high” risk.

The Bureau of Meteorology is expecting some showers to cooler conditions across fire grounds in the state’s south.

“Though not a huge amount, that (rain) should slow down the fires,” duty forecaster Jake Phillips told AAP on Sunday.

Eighteen people, including three firefighters, have died in the NSW bushfires since October.

At least 1482 homes, 100 facilities and 2339 outbuildings such as sheds have been confirmed destroyed across NSW since July. Close to 20,000 buildings have been saved.

Fitzsimmons said the RFS was identifying roles for deployed Australian Defence Force personnel to carry out throughout the week.

NSW Transport Minister and Bega MP Andrew Constance, meanwhile, called on state and federal government to get support staff into fire-ravaged areas as soon as possible as communities grapple with “unimaginable grief”.

“We have to get welfare offices into the people and I know that’s happening now,” Constance told the Seven Network on Monday.

“We just have to get in there, start to rebuild and start getting on – we have great mayors who have been working around the clock and also been fire affected themselves.”

In Victoria, cool weather is expected to give firefighters some respite before the heat returns later in the week.

The fire danger rating forecast for East Gippsland and the north east of Victoria on Monday is low to moderate, with temperatures of under 20C forecast.

The intense fire activity in the southeast and northeast of Victoria, however, is producing hazardous smoke conditions that are likely to worsen on Monday, EPA Victoria said. 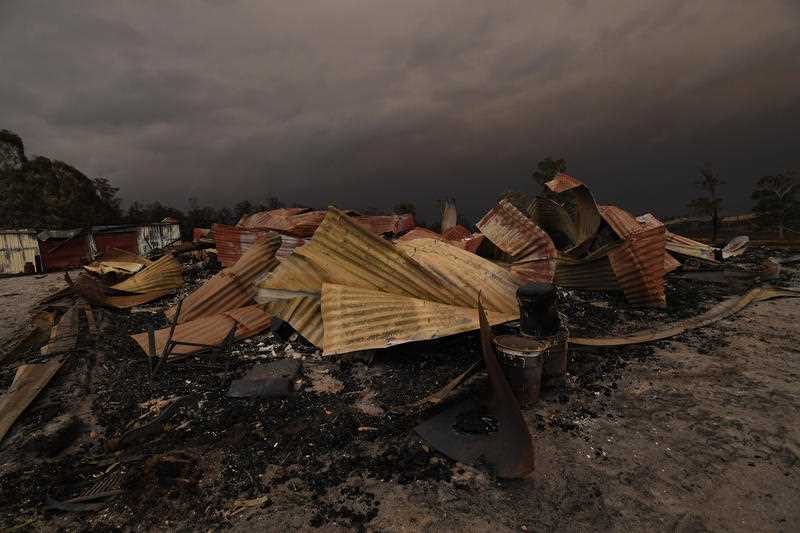 Emergency warnings are in place for East Gippsland communities in the path of bushfires at Cann Valley and in the Drummer and Merremingger state forests.

“This will be a changing, dynamic situation. We know that the weather will start to warm up and that when we get into Thursday and Friday, potential spike days again,” Emergency Management Commissioner Andrew Crisp said.

More than a million hectares have burnt statewide, 800,000 of them in East Gippsland alone.