The head of Funk Coffee & Food, Arthur Damaskos, led Benjamin Sebastino to believe that the Flinders Street Funk franchise produced $15,000 each week in turnover, translating to about $2000 in weekly profits, according to a Supreme Court judgment handed down this month.

But, in fact, the store rarely made that much money.

And although the corporate entity Hype Investments – owned by Benjamin and Mardi Sebastiano – bought Funk Flinders Street for $350,000 in June 2009, the court assessed its true value at the time of purchase as $120,000.

In an earlier judgment in the same case, handed down in July this year, the District Court found that Damaskos had misled Benjamin Sebastino, and that he would not have bought the business, nor paid the franchising and associated fees, had he known the café’s true financial position. 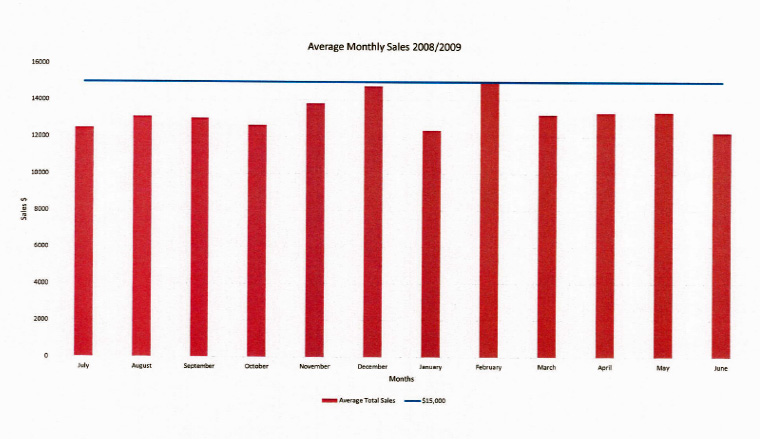 A graph from the earlier District Court judgment, showing the average monthly sales figures for the Flinders Street Funk Coffee & Food were on average well-below $15,000.

“The plaintiffs (Sebastino and Hype Investments) have proven that misrepresentations were made as to average weekly turnover of around $15,000 per week,” the judgment reads.

“Those misrepresentations were calculated to induce Mr Sebastiano to enter into the contracts, and so the fair inference is that he was induced to do so.”

Sebastino had been working as a sales representative, earning about $1000 a week, before he bought the café, and gave evidence that he would have kept his job had he known the café’s true financial position.

The court found that acquiring a business that earned Sebastino less than his wage at the time would have been “obviously unappealing”.

The judge declared the franchise agreement for the café unenforceable.

The court will now hear from the parties about the amount of interest that should be added to those figures and the payment of court costs.

“Further submissions are required to be made by the parties before (Judge Tilmouth) prior to final orders being entered,” said Frank Trimboli of WRP Legal.

“Once final orders are entered it is Funk’s intention to appeal.

“In the circumstances, it is inappropriate that any comment be made on the reasons delivered by the Judge.”

There are 15 Funk Coffee & Food franchises in SA, although they are largely run as separate businesses.

You can read the full judgment here.

InDaily contacted Sebastino’s solicitors, Haarsma Lawyers, for comment but did not receive a response.

CORRECTION: A previous version of this story mistakenly referred to the Supreme Court as the District Court.