In what the State Government calls  “an historic agreement”, the desalination plant at Port Stanvac will increase production to provide 40GL of water this financial year, and a further 60GL in the 2020/21 financial year, depending on a review.

The move means an equivalent amount of water which would usually be withdrawn from the river for consumption would now be freed up for use by farmers.

Prime Minister Scott Morrison said today the water was expected to grow up to 120,000 tonnes of fodder for breeding stock in desperate need.

“This is a practical measure which both deals with the hardship along the Murray, but importantly, deals with making available more fodder,” he said.

Premier Steven Marshall said today that the Federal Government would pay for all the cost of ramping up desalination plant production, and provide the extra water to farmers below market rates so they can continue operating at minimum levels.

He said the decision was a one-off which would have no adverse impact on South Australian water security or prices.

Marshall said it was a “time of national urgency” and South Australia was ready to support needy farmers.

“South Australia survived some of the most extreme effects of the millennium drought and fully understand the terrible impacts that drought has on farmers, families, regional communities and the nation,” he said.

“We are prepared to provide support, but we will not jeopardise our own water security or do anything that increases costs to South Australians.

“As part of this deal we have also secured a $10 million South Australian Drought Resilience Fund which will be available for our farmers.”

The Premier suggested the mostly dormant plant could be used in the future to put downward pressure on water prices. 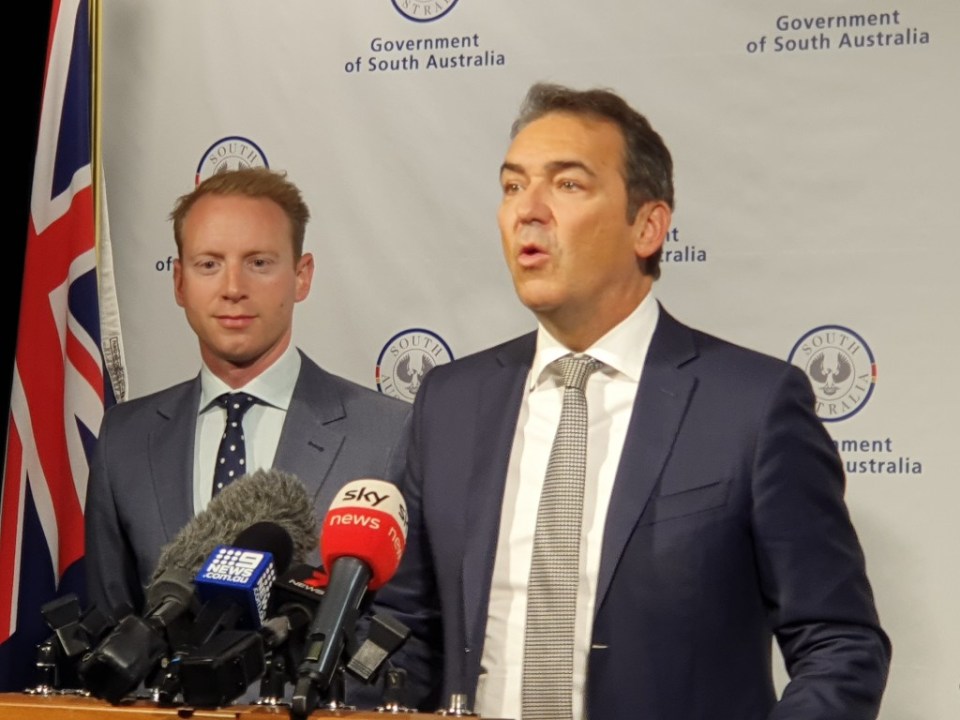 Minister for Environment and Water David Speirs said there was no point in the desalination plant being a white elephant.

“Given our desalination plant sits virtually unused, it’s time to increase its production so water is made available to drought-affected farmers across the nation,” he said.

“We have already used the Adelaide Desalination Plant to increase the water available to holders of South Australian River Murray allocations by eight percentage points and we are now further extending these benefits to a broader range of farmers in this time of national need.

“This is the right thing to do at a time of national urgency, and our agreement protects our water security, the cost of water in South Australia and helps drought-affected farmers who are doing it very tough.”

The desalination plant was built under the Rann Labor Government and first started producing water in 2011. At full capacity it can produce up to 100 gigalitres a year – half of Adelaide’s water requirements – but has produced only a small proportion of that, prompting regular criticism of the construction cost of $1.83 billion.

Critics, including the then Opposition, also questioned the Government’s decision to double its original planned capacity of 50 gigalitres.

In 2017, Speirs as Opposition environment spokesman said the desal plant was too big.

“Adelaide’s desalination plant has been shown to be double the size that it ever needed to be,” he said. “The productivity commission showed that a couple of years ago.

“It’s barely running yet costing tens of millions of dollars.”

South Australian Greens senator Sarah Hanson-Young said today that the federal and SA government had “cut a deal to reduce water flowing into the Lower Murray”.

“Firing up the desal plant doesn’t deal with the chronic over-allocation of water, corporate greed or drought,” she said.

“Cutting SA’s river water allocation in favour of turning on the desalination plant is short-term thinking and I worry SA will be left carrying the can, with less water flowing downstream, higher water prices for Adelaide, and no political will to tackle upstream greed and over-allocation.”

In Canberra, Scott Morrison announced the details of a new drought stimulus package centred on zero-interest loans for farmers and small businesses.

“This gives them massive breathing space,” the prime minister told reporters in Canberra on Thursday.

The Commonwealth’s $1 billion drought package also offers 122 drought-affected councils and shires along the east coast $1 million each if needed, while small businesses dependent on agriculture will be able to apply for loans of up to $500,000 that can be used to pay staff, buy equipment and refinance.

There will be $10 million for schools facing hardship as a result of the ongoing drought, including fee concessions for boarding students.

The government will redirect $200 million from the Building Better Regions Fund to support drought-stricken communities, and pump an extra $138.9 million into road projects.