The figures, released to InDaily by the office of Health Minister Stephen Wade this morning, represent a concurrent total of 95 days – or more than three months – stuck waiting outside hospitals during the 30 days of of last month.

It’s the longest recorded period South Australian ambulances have ever spent waiting on hospital ramps during a single month.

It is more than 200 hours longer than in August, when paramedics spent 2090 hours on the ramp – the previous record-longest period.

Ambulances stuck on the ramp cannot attend to other patients who call 000.

The SA Ambulance Service (SAAS) was overwhelmed by patient demand on 30 occasions during the months of June and July this year.

That’s according to a document (below), which the Ambulance Employees Association says it obtained as part of its SA Employment Tribunal dispute with the State Government.

The Government took the union to the tribunal after paramedics threatened to refuse to do overtime.

The document shows, in red, the number of code reds between June and July under the SA Ambulance Service’s capacity management plan.

A union representative told InDaily it was releasing only a blurred photograph of the document, in order to demonstrate the problem while protecting the identities of employees it mentions. 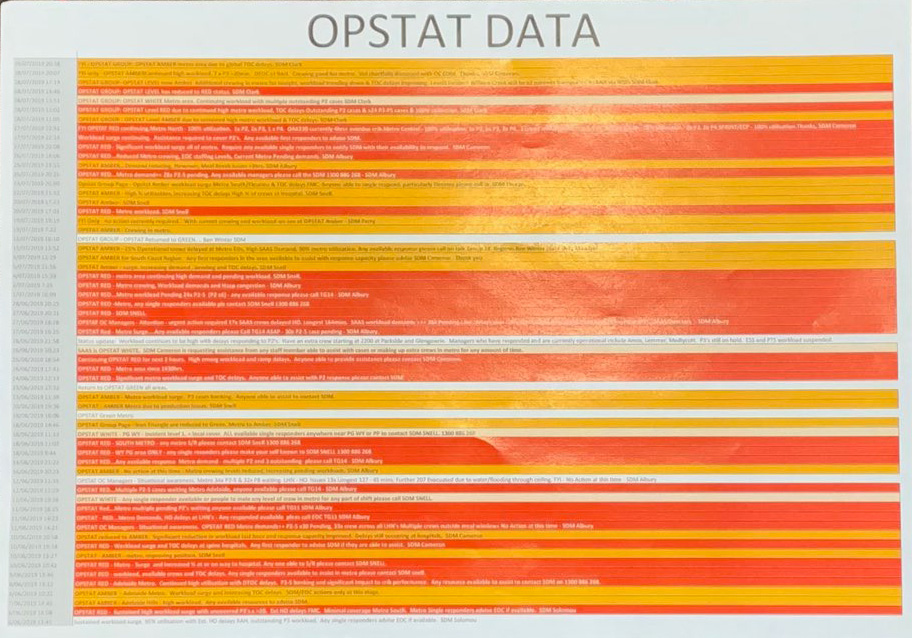 A code red means “levels of demand are having a sustained impact on SAAS ability to deliver safe, quality patient services” and “despite implementation of contingencies and plans … events / factors are affecting service delivery”.

Last month, the union said a 90-year-old woman died after waiting in an ambulance outside of the Flinders Medical Centre for more than an hour.

Minister Wade said in a statement that: “We do not accept ramping and are rolling out a range of strategies to stamp it out.

“While there is no silver bullet we are seeing green shoots through initiatives such as our priority care centres, which (are) diverting hundreds of patients away from our emergency departments when appropriate to do so.

“During September, we experienced a significant spike in demand and I am absolutely sure that without initiatives like our priority care centres, our hospitals and ambulance would have been under more stress.”

“These figures show what a disgraceful state the hospital system is in at the moment,” he said.

“The government’s response to this isn’t investment … and opening more beds – it’s to cut doctors and nurses.

“That will only make this situation worse.”

Last month, the Government began offering redundancy packages to staff at Adelaide’s central hospitals in what the Opposition described as a “wave of job cuts” for doctors and nurses.

CALHN CEO Lesley Dwyer said at the time that a recent staff survey had revealed many employees wanted to leave – and emphasised that her agency had to live “within its means”.

“Over the past few months we have been redesigning the way we work to ensure service delivery continues to put patients at the centre of everything we do, and so that we can become more efficient in the way we do things,” she said in September.

“We need to operate within our means, and to bring CALHN back to a size and a shape that will allow us to realise the ambition that we have for the future.

“This process is not about targeting individual staff; rather offering VSPs gives us the opportunity to realign our resources.”