In a report tabled in Parliament last week, South Australia’s training centre visitor (TCV) Penny Wright said her office had provided advocacy for three residents at the Adelaide Youth Training Centre at the end of last year who were detained while on remand due to lack of alternative placement options.

Wright described the practice as a “systematic concern” and “on the face of it” a breach of core protections in the International Covenant on Civil and Political Rights, and the Convention on the Rights of the Child.

Those conventions stipulate that governments must primarily consider the best interests of children in decision-making and that the detention of a child should only be used as a measure of last resort.

It comes amid criticism of the “cell”-like appearance of bedrooms at the Adelaide Youth Training Centre’s Jonal Drive and Goldsborough Road campuses, as well as concerns that residents – some as young as 10-years-old – are being filmed while showering.

In her report, Wright outlined a case study of a young male who was admitted to the Adelaide Youth Training Centre (AYTC) for allegations of causing property damage.

“He was not under a Guardianship order but could not return home to his family,” the report states.

“While an alternative placement was being arranged, this young man remained in detention and was assaulted by a peer and bullied.

“He continued to be subject of the consequences of deprivation of liberty, including the structure and routines of AYTC such as the use of CCTV in bedroom and semi-naked searches.”

According to Wright’s report, the right to privacy is a key issue among residents at the Jonal Drive campus.

We expect to be on camera if we are fresh in, or play up, or having silly thoughts, not all the time

The report states bedrooms and adjoining bathrooms in one of the units are fitted with cameras that are connected to “multiple screens” visible to staff, visiting personnel and other residents.

Statements from some of the residents – published on the TCV website this morning – detail these concerns.

“Some staff turn the screen in the office around, some cover it, but I’m always on the screen,” one is quoted as saying.

“We expect to be on camera if we are fresh in, or play up, or having silly thoughts, not all the time,” another is quoted.

It follows the release last week of an Ombudsman’s report criticising the use of spit hoods at the Adelaide Youth Training Centre.

In the report, the Ombudsman included photos from CCTV cameras showing residents being detained in their bedrooms.

Human Services Minister Michelle Lensink responded by announcing the State Government would ban the use of spit hoods at the centre by June next year. 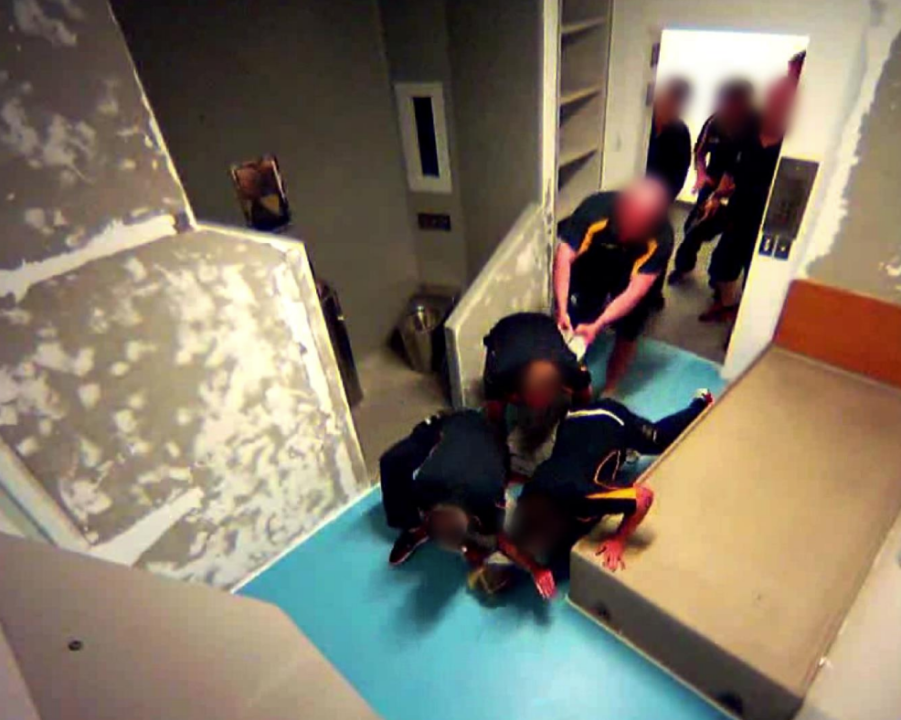 CCTV footage of a resident at the Adelaide Youth Training Centre being detained by staff. The camera angle shows the residents’ bathroom facilities. Photo published by the SA Ombudsman 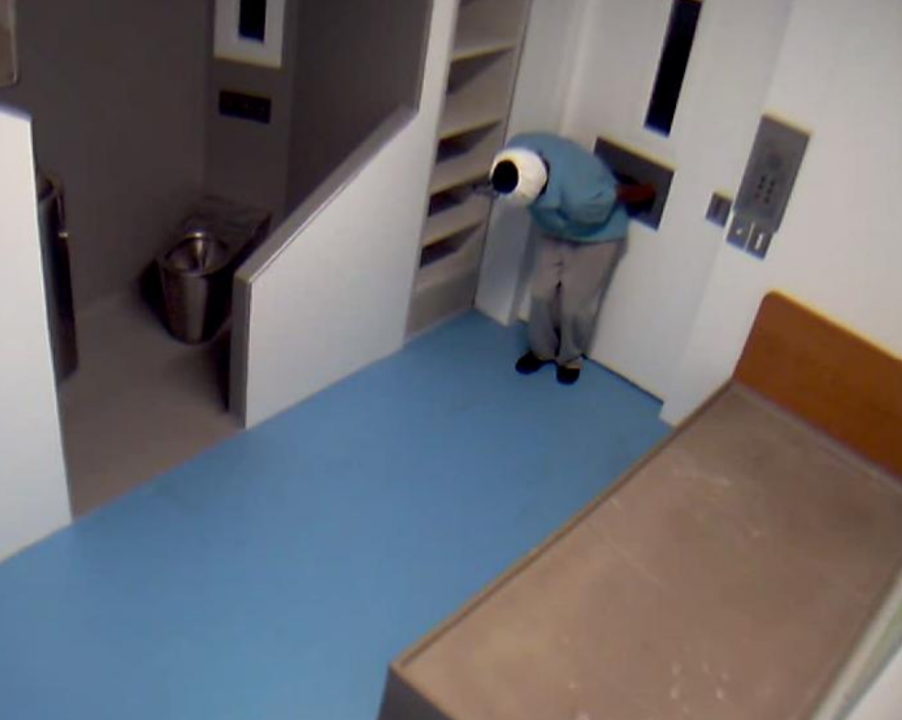 A resident at the Adelaide Youth Training Centre wearing a spit hood. The camera angle shows the residents’ bathroom facilities. Photo published by the SA Ombudsman

According to Wright’s report, staff at the AYTC say they are attempting to reduce or cease displaying resident rooms on monitors “where it is deemed appropriate”.

“The AYTC advises that managing and balancing safety/risk with privacy is challenging and that the extensive bedroom camera coverage helps ensure the safety or residents and manage risks,” the report states.

“The TCV understands the need for balance, but is concerned about the negative impact this has on residents’ privacy and dignity, particularly for young women who may be menstruating.”

Wright criticised the state of bedrooms at the Adelaide Youth Training Centre, describing them as “bleak, with peeling paint and large areas of graffiti on walls, windows and mirrors”.

She said at one unit none of the bedrooms were furnished with a chair “with the result that any resident who is required to eat in their rooms must do sitting on their bed”, and some residents were forced to keep their clothes on the floor due to lack of shelving.

“It is questionable whether a room with such sparse furniture and impersonal appearance constitutes a ‘bedroom’ as would be the norm for other children and young people,” Wright states.

“Rooms that do not contain these basic features are simply cells.”

Wright also lamented a lack of staff resourcing at her office.

She said four visits were made to each training centre campus for the purpose of the report, with three conducted by only one advocate “due to restricted staff availability”.

“This experience confirms that visits by a single advocate limit our capacity to meet the program’s baseline objective of sighting and speaking individually with every resident,” her report states.

“On one occasion, an entire unit was not visited during the allocated time due to limited… advocate resources.

“This is a matter of considerable concern.”

In a statement to InDaily, Human Services Minister Michelle Lensink said she met with Wright this morning to discuss “any concerns and ideas she has for our youth justice system”.

“I thank the Training Centre Visitor Penny Wright for her latest report,” she said.

“The Adelaide Youth Training Centre has regular contact with Ms Wright and engages with her on a range of issues, with a view to improving services for children and young people in the training centre.

“As always, our priority is the safety and wellbeing of our young people and staff.”

Lensink added that the number of children and young people admitted to the AYTC had decreased.

“The State Government remains committed to early intervention and prevention, with the aim of keeping children and young people out of the youth justice system,” she said.

The Department for Human Services claims it has taken on board “many recommendations” raised by the TCV in the report, including reviewing procedures that support individual dignity and privacy.

In July, InDaily reported female and male inmates as young as 10-years-old would be moved out of the Jonal Drive campus and into the newer Goldsborough Road facility housing only males up to 18-years-old as part of a six-month trial.