Her three children – Jane, 9, Arnna, 7, and their little brother Grant, 4 – were taken from a crowded Glenelg Beach on a sunny Australia Day, 1966.

The trio left their Somerton Park home for a day at the beach – and vanished.

During the days, weeks, years and decades that followed, amid endless media attention and speculation, Nancy and Jim Beaumont waited for news about their children’s fate.

A tangible clue, a tip, a confession that would at last lead to their beloved childrens’ remains; a terrible discovery that nonetheless would allow closure, a burial, an end to the questions, the searching, the aching, grieving emptiness.

She died on Monday, aged 92, at an aged care home at Glengowrie. 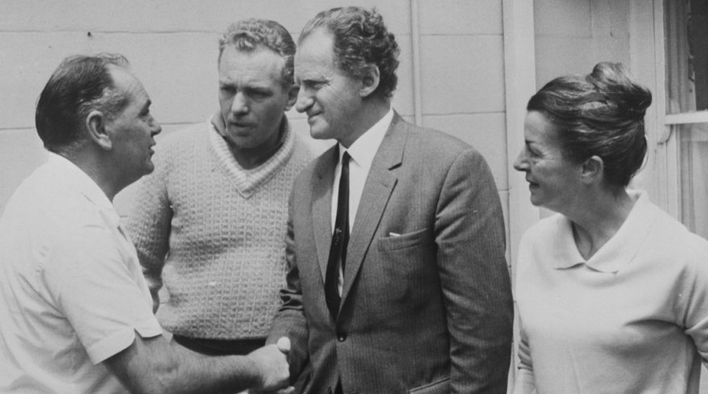 Nancy Beaumont (right) in 1966. Her husband Jim is pictured at far left.

The couple at first co-operated with the intense national and international media interest, the theories, the psychics, as the police searched and excavated.

Hope gradually faded, but the public interest in their private tragedy never did.

The Beaumonts’ retreated in 1968, never to speak publicly again.

They separated several years later but remained friends, talking only to police who never gave up trying to solve the nation’s most enduring crime mystery.

The unsolved disappearance of the Beaumont children became a subject of morbid fascination and crime folklore, a byword for tabloid fodder, cranks, hurtful hoaxes and tasteless jokes made by people seemingly unaware that the children’s parents were still alive, still grieving, still living near that fateful stretch of sand.

Witnesses told police they had seen the children with a tall, blonde, thin-faced man, with other sightings at Colley Reserve and at a Glenelg cake shop, where the children who had left home with coins paid for food with a pound note.

No thin-faced man was found, or charged. While the investigation foundered, the gossip, speculation and theories continued unabated.

The frenzy returned in 2018 – 52 years after the children disappeared – when police started excavating an area inside the New Castalloy property at North Plympton – the second visit to the site since 2013.

Adelaide seemingly talked of little else as media cameras lined the perimeter and a hole was dug, eventually revealing bones which were quickly identified as not being human.

Police focused on the property because two brothers said they had dug a hole there around the time the children disappeared in 1966 at the request of then-site owner, Harry Phipps.

Phipps became a person of interest in the case after his death in 2004, had lived at Glenelg and was the subject of a 2013 book, The Satin Man.

Co-author Alan Whiticker, told the New Daily last year when the latest search proved unsuccessful that Nancy and Jim Beaumont had “borne more than anyone could understand”.

SA Police have never ended their investigation into the disappearance of the Beaumont children, and today issued a brief statement.

“Police note with sadness the passing of Mrs Nancy Beaumont.

“Consistent with family wishes, SAPOL have no comment to make about her passing beyond expressing our sympathy and conveying on behalf of the family that they have no wish to speak to the media.

“We ask that you respect the family’s wishes in the circumstances.”