The Irish-born Lee was small but possessed a steely determination, her activism earning her the “turbulent anarchist” tag from Adelaide critics who disapproved of her cause and methods.

Author Denise George is in no doubt about the importance of Lee to the rights enjoyed, often unknowingly, by today’s South Australian women.

“She was the individual who led the women’s suffrage campaign after the motion was first put up in parliament by Edward Sterling in 1885,” George said.

“Mary was the secretary of the Women’s Suffrage League of South Australia and she was responsible for doing a lot of speaking engagements, speaking to the Premiere, dealing with politicians, educating the public.

“It was because of that she was on the receiving end of a lot of antagonism and because she was the face and the voice of suffrage.

“But this was really, I think, the start of the women’s rights movement.”

On 18 December, 1894, the South Australian Parliament passed a bill which allowed women in the state’s colony to vote and stand for parliament.

This was after a decade of campaigning, letter-writing and lobbying in-part by suffragettes, such as Mary Lee, which made South Australia the first place in the world where both men and women had equal political rights.

George – who penned Mary Lee: The Life and Times of a ‘turbulent Anarchist’ and Her Battle for Women’s Rights, published last year – said prior to the passing of this legislation South Australia was a turbulent place for women: most women weren’t educated and had limited entitlements surrounding work and autonomy.

“Back then women were very reliant on the men in their lives, whether it was their fathers or the men they married, and it was difficult for them to earn an income as there were no women’s unions to support them for wages or conditions,” she said.

“[But] Mary experienced the Irish Potato Famine, and she worked as a school teacher in Britain, working with the poor and she knew the value of education especially for women.

“She had worked in very underprivileged areas, so she knew that poverty was an issue for women.

“But she found her voice and she used it in a very positive way, at a time when women were not encouraged to speak up.” 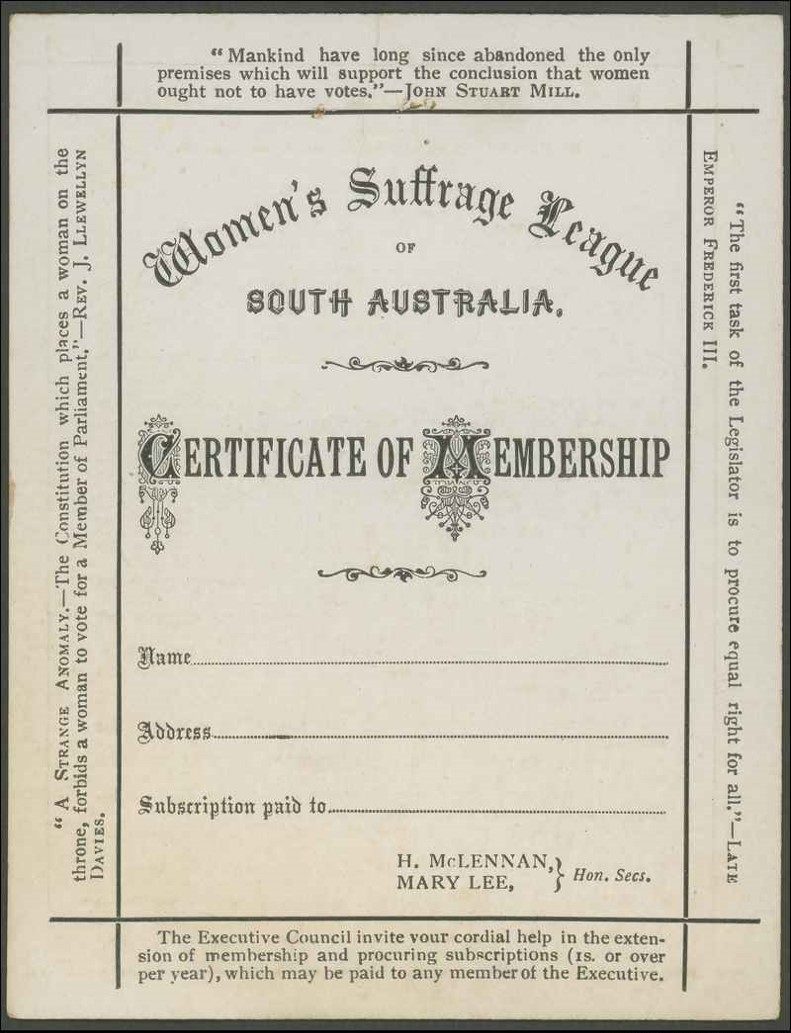 “A strange anomaly – The Constitution which places a woman on the throne, forbids a woman to vote for a Member of Parliament,” – Rev. J. Llewellyn Davies. Photo: Supplied

Mary arrived to the colony of South Australia in 1879 as a 60-year-old Irish widow with her daughter Eva. The pair made the transatlantic journey to look after Mary’s son who was residing in the colony but was dying of tuberculosis.

After arriving Mary joined the Primitive Methodist Church – a group interested in social reform and religion – and rented a two-storey property in North Adelaide.

Although Mary’s son eventually died, it didn’t stifle her fight for gender equality.

“She would do a great many speaking engagements; she would talk to people in Adelaide and in the suburbs and she would travel as far as places like Broken Hill,” said George.

“She also wrote almost on a daily basis to what was then The Register and The Advertiser, promoting the campaign.”

It follows that it is an arbitrary and unjust Government which compels its support from those whose will in relation to it is never consulted. That as women assist in maintaining the Government they have a right to say how and by whom they shall be governed, in other words—to the vote. (Mary Lee, 14 April, 1890, The Register).

Mary’s activism however also garnered her a “turbulent anarchist” label and scorn from the public.

“Some people wrote to the newspapers, insulting her and questioning her faith,” said George.

“There were comments that she was seen around four nights a week at meetings and ‘why wasn’t she at home?’ and she was even insulted by members of the church for speaking on Sundays because at the time that was not the done thing.

“Mary Lee was five-foot-tall, she dressed in widow’s black – and by all accounts an extremely kind and generous woman – but she held very strong views and she was very stubborn.

Aside from suffrage Mary also extended her philanthropic efforts to the Social Purity Society – an organisation that lobbied against legislation which aimed to legalise brothels and prostitution – and successfully campaigned to help raise the age of consent to 16 in parliament.

“Prior to that girls as young as 10, and 11, and 12 were working as prostitutes in the Adelaide West End,” said George.

“But she was also educating women about how to vote like what to do when they went to the ballot box.”

When asked whether the suffragette movement kicked-off other political changes for women, George said it was a slow change – despite Mary’s fight for political representation, it took many years before women participated in South Australian Government.

In 1897 Catherine Helen Spence was the first female in Australia to run as a political candidate, which was more than 10 years after legislation passed which allowed them the right to.

“[In 2019] they’re still arguing about, you know, the rights of sex workers and the under-representation of women in parliament,” said George.

“The similar bullying tactics that were used in the 1880s are being used today: the name calling, the inference, looking at their reputations as women.”

“In the future there’s going to be change in parliament, but I do think that women may need to see more women in parliament or perhaps parliament itself has to change in terms of its treatment of women.”

Mary eventually died in 1909 after losing a two-week battle to influenza.

George says only then was the disruptor silenced.

“She was very vocal, really right up to the end.”

A bust of Mary Lee at the University of Adelaide. Photo: Flickr

To commemorate the 125th anniversary of women gaining the right to vote and stand for parliament in SA, Denise George will give a talk about Mary Lee at Unley Town Hall on Thursday, 19 September.  Click here to find out more.