Tom Webster and Guthrow Taylor Johnson are among 12 student protesters skipping school between 9am and 3pm on Friday each week with no intention of stopping in the near future.

The weekly strikes follow mass school walkouts across the globe earlier this year, including in South Australia.

During the event, Adelaide School 4 Climate spokesperson Doha Khan called on her peers to boycott Friday classes until the Federal election.

Although the election came and went, Taylor Johnson said the group wouldn’t stop protesting until their key demands were met.

“We want no more new fossil fuel projects in Australia,” he said.

“Starting with saying no to Adani, which is going to be the biggest coal mine in the Southern Hemisphere if the government allows them to build it.

“We also want 100 per cent renewables by 2030 and we want a just transition for workers in fossil fuel industries for them to go into renewables.”

In 2018, Thunberg spent every school day sitting outside of Sweden’s parliament protesting the country’s inaction on climate change. Thunberg later reduced her strikes to every Friday, kicking off a movement of Friday school protests.

A wave of school and university strikes demanding more progressive climate policy has since erupted across the globe.

Webster said while many of their fellow weekly protesters were attending the strike he and Taylor Johnson – who are both still in high school – felt it was important to continue their parliamentary protest as well. 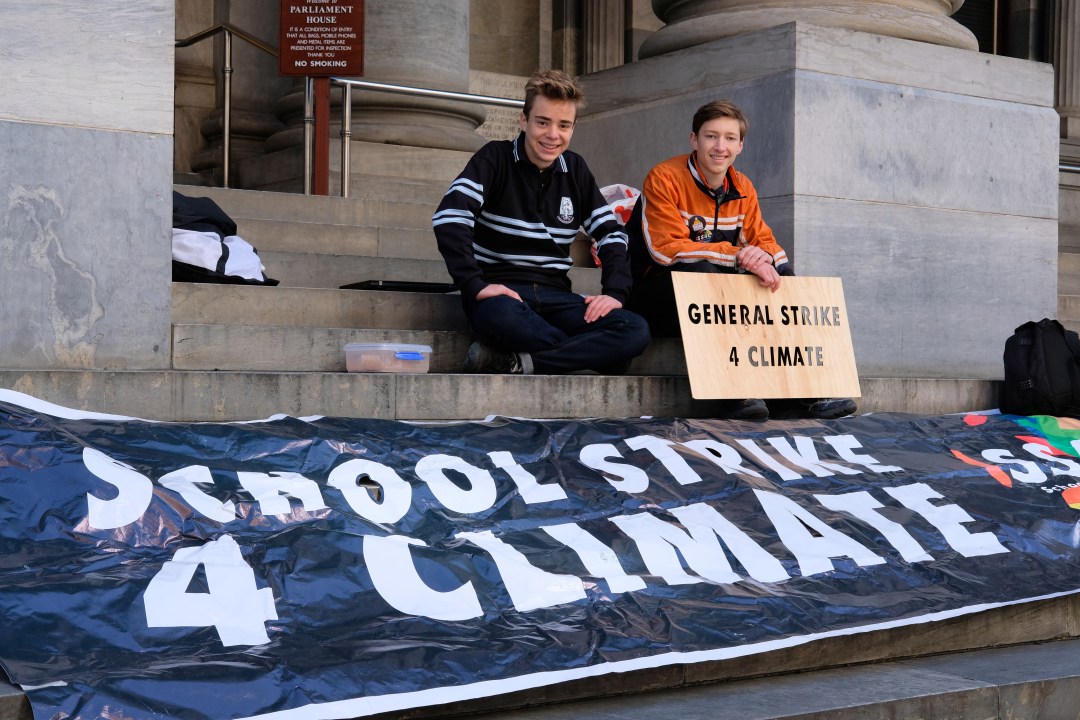 Tom Webster and Guthrow Taylor Johnson are part of a group of teens taking to the steps of state parliament every Friday.

Taylor Johnson said the pair planned to join the next major climate strike, to be held on September 20, and hoped to see his peers there.

“Right now, in Australia, [there’s] a lot of climate deniers. So, it’s up to Australia to both lead the way in climate policies and set an example to other countries,” Taylor Johnson said.

A Seaton High School year 11 student, Taylor Johnson said he originally struggled to find a balance between his studies, social life and activism but has managed to navigate the three successfully.

“It does take a while to get used to it at first… [but] I have tried really hard to find that balance and stay on top of [my school work], which is great for my organisational skills in terms of prioritising,” Taylor Johnson said.

“I’ve decided to put a lot more effort into both being an activist and helping out with the strikes and also my school work.

“My grades are actually better.”

Webster, a Marryatville High School student, said while his parents were supportive of his decision to strike, they took some convincing.

“I had to make compromises with them in relation to how I would catch up on my work. I had to talk to my teachers as well and ask, ‘what work do I miss out on Fridays and how can I catch up?’,” he said.

“[My teachers] would rather I was in school – but there are no jobs on a dead planet.

He said he also hoped the weekly protests would cause people from the broader community to discuss climate change policy.

“We want to be persistent. We want to show that we’re not going away,” Taylor Johnson said.