Matt “Matty” Basso, co-owner of Riot City Wrestling, points to a bin in the corner of the gym.

“If you need to throw up, that’s where you want to do it,” he says.

It’s 7pm on a cold Tuesday night and I’m at the Riot City Wrestling (RCW) tryouts at Hindmarsh. I have so much nervous energy I could charge an electric car.

Some of the guys are younger, maybe 18-years-old, who have fewer tattoos but appear no less formidable.

Regardless of gender and size, all the wrestlers wear knee and elbow-pads. They know what’s coming over the next two hours: they’re going to be tossed, flipped and thrown around the ring – and they’re going to love it.

We start with a cardio warmup: 30 squats, 20 crunches and 10 tuck jumps. “I can do this,” I say to myself. “I do Pilates sometimes and ride my bike most days.”

As well as testing fitness, the moves were also to measure how coordinated I was and whether I could stay in time.

Matty explains that unison and timing is important to the safety of a “spot” – wrestling vernacular for a sequence of moves.

“If you’re not safe, you can’t wrestle.”

A young guy with a blonde top-knot walks in. He’s sweaty after working out in the weights room and wipes his forehead with a faded World Wrestling Entertainment (WWE) branded towel.

“I got this towel when I was 10 years-old,” he says to me, introducing himself at Jack Nolan.

“I’m 21 years-old and as of July this year I’ve been wrestling for a year.” 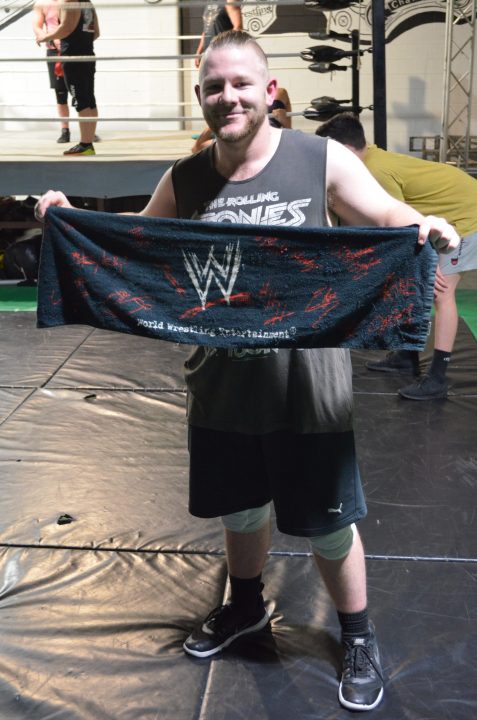 Jack Nolan got this towel in a Royal Adelaide Show showbag when he was 10.

Jack says professional wrestling saved him – before he joined the gym, he was working in a “shitty pub” washing dishes.

“It was pretty bad… I was really lost.”

One day Jack wanted to change his situation and turned to something he’s always been passionate about.

“For a long time I always felt not fit enough or not tall enough [to wrestle], but I eventually I said fuck that – I’m not getting any younger.”

“I’ve been coming back ever since.”

Now Jack works at JB-Hi FI as a storeman and studies youth work through Open Colleges. When he’s not working or studying, you can find him at the RCW gym four nights a week because he “has no other hobbies”.

“If you want to succeed in wrestling… you have to let it consume you.”

Back to the tryouts. Next, I was tested on safety and asked to give my best forward roll. As someone not in the military or 12 years-old, I don’t forward roll regularly. This was a challenge.

“You spend your whole life avoiding the ground, so it’s only natural to not enjoy this,” Matty says.

“But we avoid everything natural in wrestling,” he adds with a smirk. 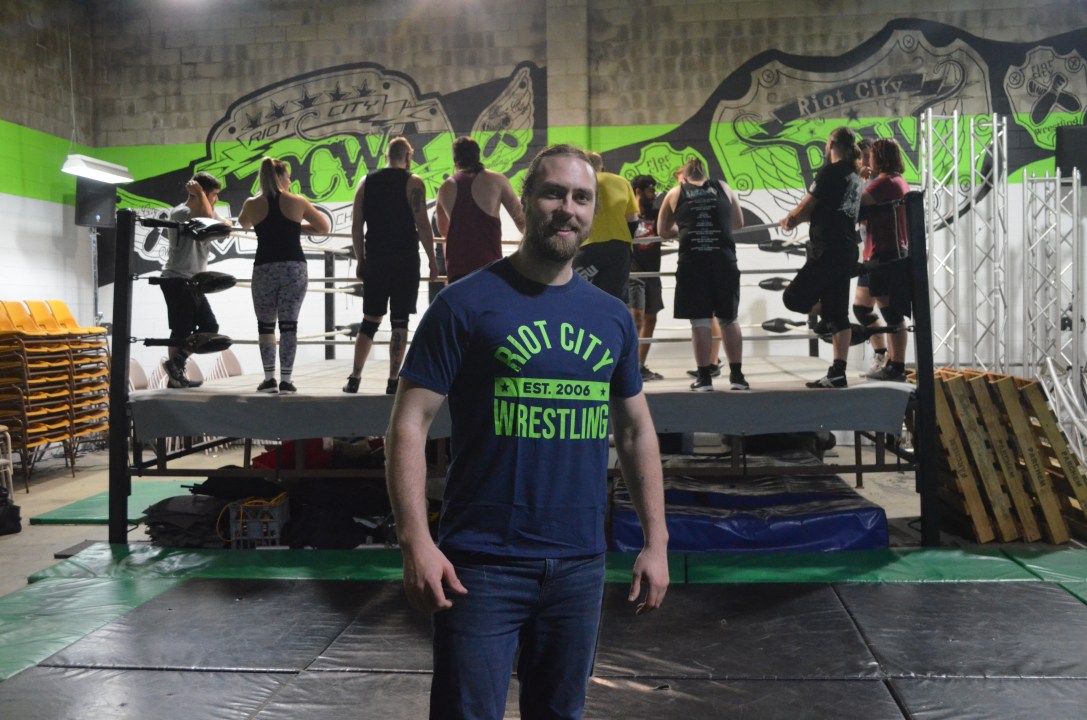 Matty Basso and his kingdom.

I attempt my best forward roll and fail on all fronts. But the wrestlers offer semi-hopeful encouragement with a grimace: “It’s going to suck for a while but you’ll get better.”

Matty tells me that these spots we’re practicing form “the business of the match.” While the beginning and end of a match is mostly figured-out, what happens in the middle is whatever the wrestlers want it to be. It’s their time to shine and make it their own. 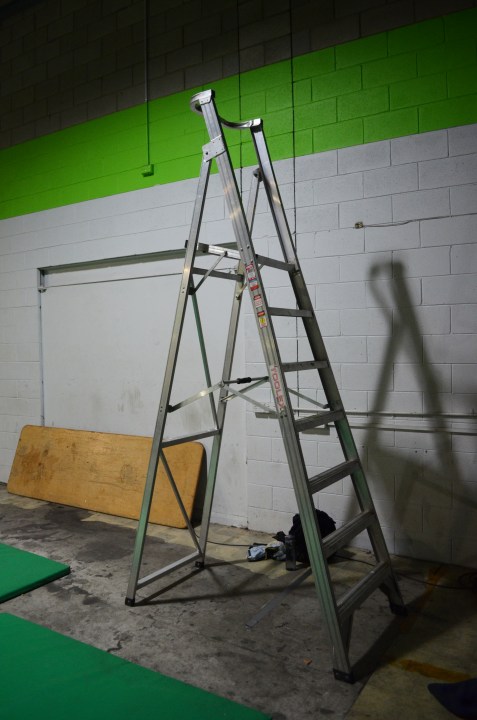 Do all gyms have ladders for work-out equipment?

Next was bumping. Like the forward roll, a “bump” is a quintessential wrestling move. Designed to protect any wrestler from serious injury, a bump trains you how to fall backwards and brace yourself after you get clotheslined or punched.

“Attack the mat with your elbows,” Matty says to me while I crash into the ground, landing on my neck.

So far wrestling is learning how to toughen up and embrace pain.

A female wrestler next to me with huge arm muscles moves through the bumps and forward rolls like Lara Croft from Tomb Raider.

Emma is 25 and has been wrestling for a year, but she says it wasn’t an easy start. She left her first try-out with a huge headache – she didn’t bump properly – and learnt pretty quickly she wasn’t fit enough.

“I almost died, but I came back because I’ve always been a fan of wrestling, ever since I was a little kid,” she says. 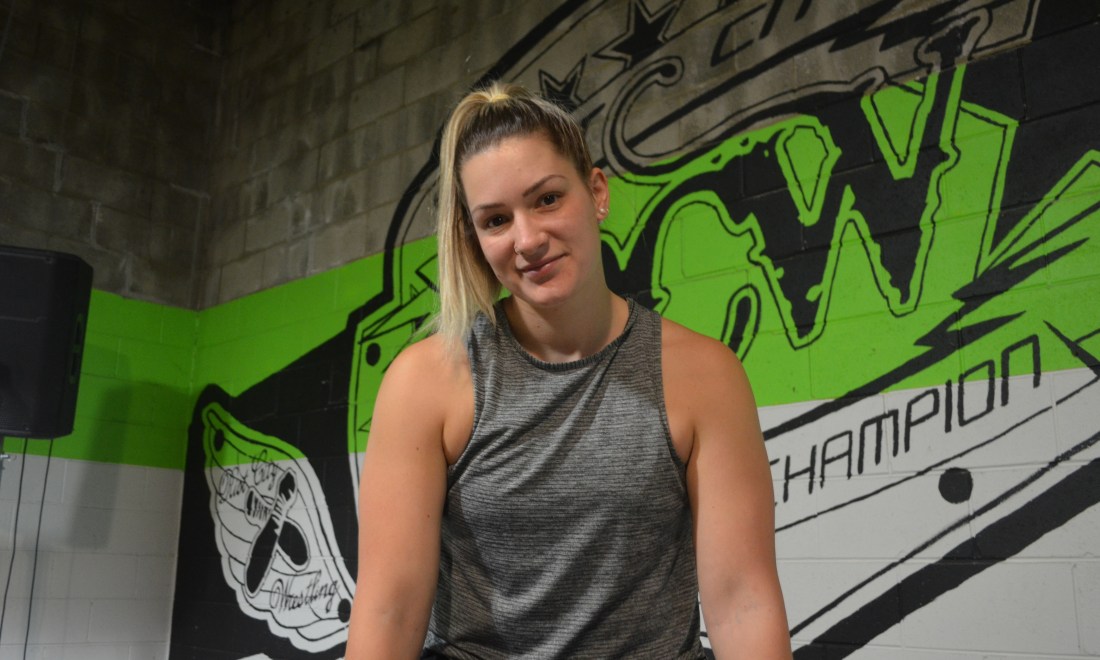 Emma Roberts is studying fitness and says she would love to work at Riot City Wrestling if they had an opening.

Emma says she found the impetus to wrestle after having a bad day at work – she realised that although she had two kids and a steady job in child-care, she didn’t have any interests or hobbies.

“It was pretty depressing,” she says. She was also in the process of divorcing her husband who would “never” let her wrestle. Emma wanted to do something for herself, and this turned out to be ramming the turnbuckles with a wrestler.

“I come back for the community, we’re all so supportive here.”

“But I also love the way that wrestling forces you to move your body in unnatural ways.”

After working through fitness and floor work, Matty says he’s going to test my sparkle-factor: the “promo.”

A “promo” is a wrestler’s bread and butter, this is the acting that glues the action of a match together. 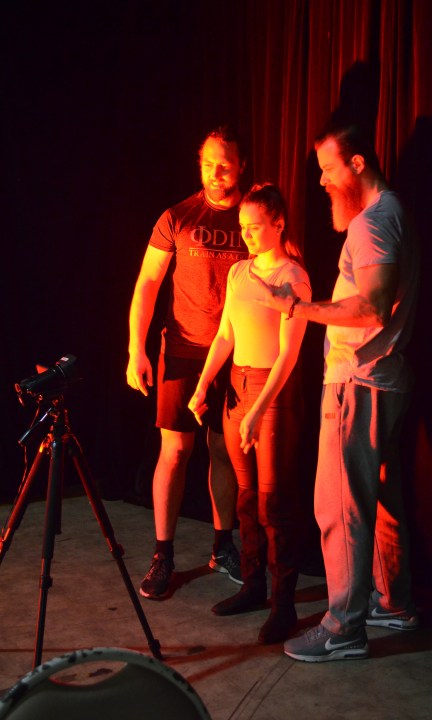 Gods and Monsters and Miki Fortune selling their best spiels ahead of an up-and-coming match.

A promo is any promotional material uploaded on Facebook before a match to hype the crowd, or is the speech given in the ring before a fight to scare your opponent.

“Wrestling is all about the sell, so sell me your character!” he demands.

I ask myself: What would my favourite wrestler, The Undertaker, do? With as much oomph and arrogance I could gather, I shouted – quite sheepishly – “I am the Fallen Angel” in front of the room full of strangers.

“When doves fly and angels fall, you know trouble is coming.”

After I come out of the ring, Matty looks me up and down saying, “there’s room for improvement.”

Running the Ropes will continue next week when Angela Skujins attends the “expert night” and learns how a wrestler’s costume covers everything during a match.