A video posted to social media today shows Marshall talking directly to camera for the SA Music Hall of Fame during the event last July, attended by Julia Zemiro, Jimmy Barnes, John Schumann and a host of others.

“Well it’s absolutely fantastic to be at the Thebarton Theatre tonight; the Thebby, as it’s affectionately known by so many South Australians,” Marshall said.

“Tonight is a night of nights, a great time to celebrate the 90th anniversary of this much-loved theatre.

“There has literally been a line-up like we have never seen before, because people love this theatre.

“Long may it continue. It must be protected, it must never be bulldozed.

“We’ve got to not only protect it, but grow it. Happy birthday, Thebby Theatre.”

The video surfaced as the Marshall Government continued to refuse to guarantee that the SA Heritage Listed-venue would not be demolished in the multi-billion dollar South Rd upgrade.

An online petition to save the theatre, launched on Sunday night, has already been signed by nearly 45,000 people.

Thebarton Theatre is sited near the corner of South and Henley Beach roads, with the building separated from South Road by its adjoining car park.

Fears emerged this week, following a report in the Sunday Mail, that the building, along with a church and other heritage sites on South Road, would be affected by the road upgrade project, particularly if the Government chooses a surface road.

Hundreds of South Road properties from Tonsley to the Torrens are set to be acquired and bulldozed under the next stage of the road corridor’s upgrade.

The government is awaiting delivery of a business case before deciding which option to choose for the upgrade of the section, including tunnels or surface-only.

Heritage and acting Transport Minister David Speirs said this week he could not guarantee the theatre’s future ahead of any decision, but was mindful of its heritage value.

“This is a very premature discussion and it’s far too early to speculate about which properties may be impacted by the North-South Corridor project,” he said.

“There is considerable planning and design works to be undertaken, once a preferred option is selected.

“The Thebarton Theatre is a cultural icon and the design for this project will consider many factors, including Local and State heritage-listed properties.

“That’s why two of the three options the Marshall Government has put on the table involved tunnelling.”

Marshall is on leave until July 21, and a spokesperson referred InDaily to above Speirs comment.

However, the spokesperson also said the Premier was emphasising how important the Thebby is to SA’s live media scene: “…and will continue to be, which is why only last month the State Government invested $500,000 to upgrade it.”

In a statement posted to Marshall’s Facebook page this morning, the Premier said it was “clear people are passionate about the Thebarton Theatre. So are we”.

However, his statement did not go as far as his comments at the theatre’s birthday celebrations last year.

“We value the contribution The Thebby makes to the community and it’s for this reason we continue to invest in its future,” today’s Facebook post said.

“Last month, we invested $500,000 to ensure the Thebby can be fully utilised during the summer months and continues to be a sought-after venue for artists.”

Addressing media reports suggesting the venue was threatened, the Premier said “we have already announced that of three options on the table for this generational road upgrade, TWO involve tunnelling”, and “significant consideration” was being given to local and heritage properties in project planning. 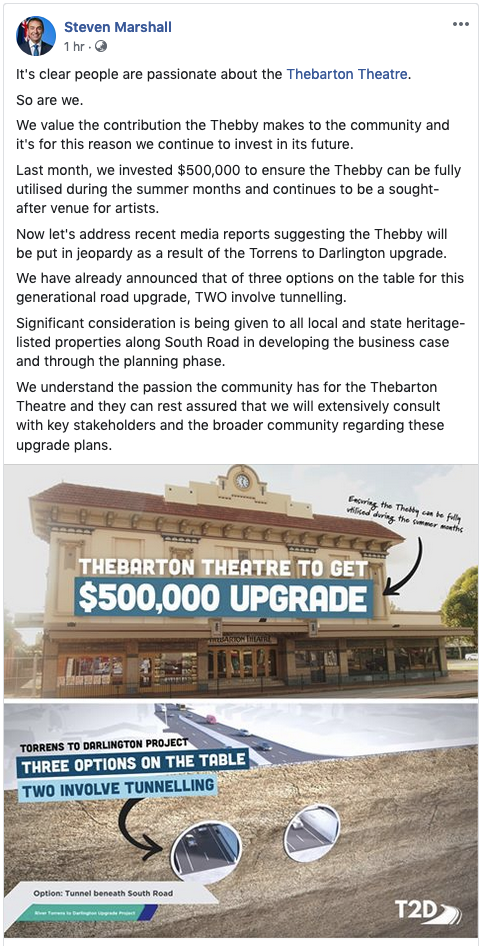