Lucas’s sixth State Budget overall, and second since the Marshall Liberal Government’s 2018 election, is itself a deliberately modest fiscal document.

Defiantly lacking the bells and whistles of his Labor predecessors, its primary ambition appears to be protecting the surplus Lucas pledged to deliver before he was hit with a $2.1 billion GST reduction to 2021-22, including $517 million in the current financial year.

The Treasurer defined the “selling point” of his budget – whose vast majority of measures had been pre-announced well before today’s budget lock-up – as “the aggregate, the major infrastructure program”.

He listed a $550 million funding commitment to start building the new Women’s and Children’s Hospital and $150 million – with $85 million locked in from the Commonwealth – for an Aboriginal Art and Cultures Gallery on the old Royal Adelaide site as measures underlining that ambition.

But he conceded the budget was “very modest in terms of claims”.

Indeed, with the final business case, planning and final cost still to be identified, the previous timeframe estimate for delivering the new hospital has blown out by two years to 2025-26.

“The selling point of the budget in our view is a continuing of good, solid economic management,” Lucas told media.

“We are not a Government coming in with a whole series of new programs and priorities… we were elected on a program of lowering costs. 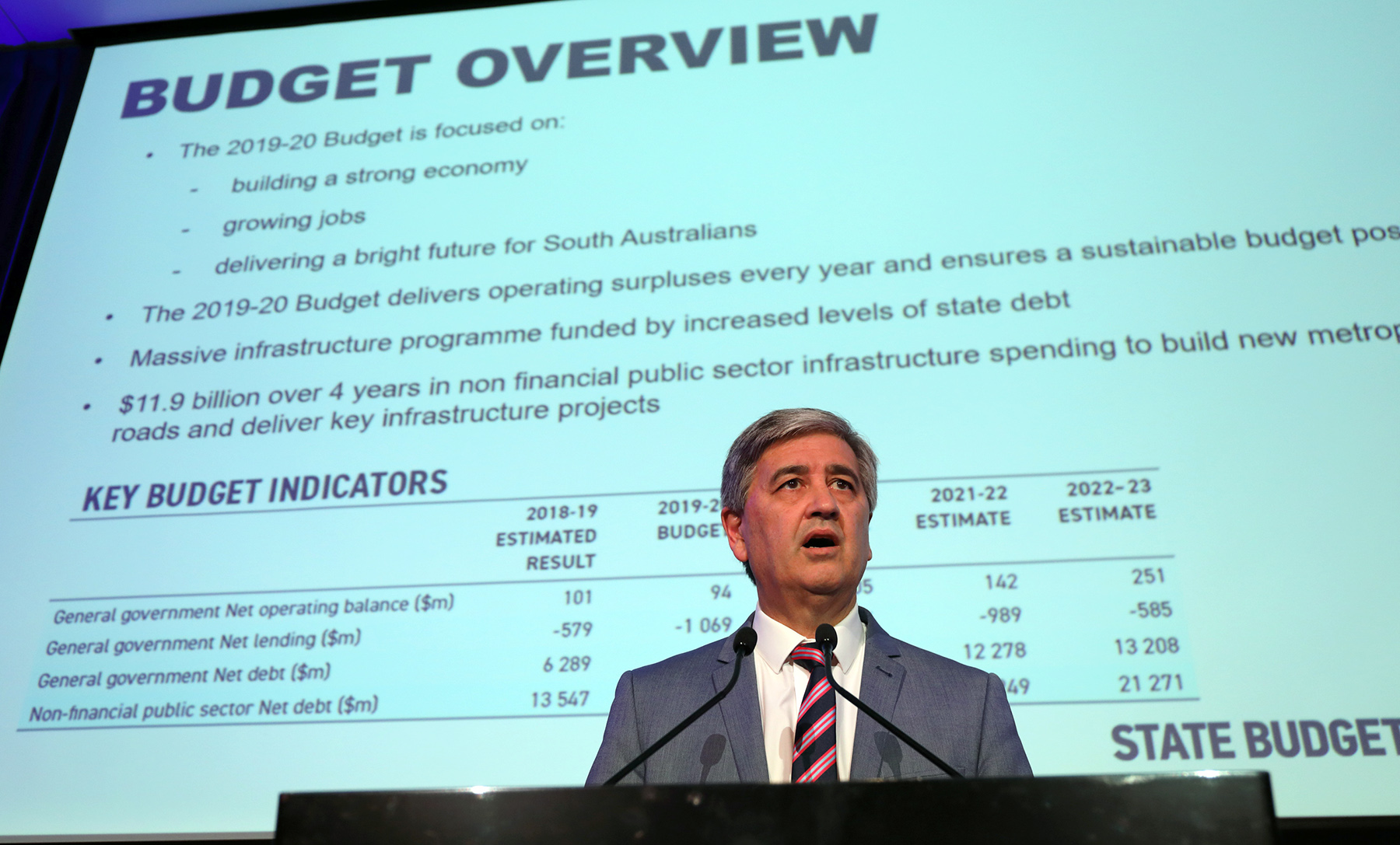 Instead, he insisted, “the Government has chosen a responsible balance of further expenditure reductions, targeted revenue increases and an increase in debt levels to help finance a significant economic infrastructure programme”.

But the Liberals were also elected on an unambiguous mandate to lower the cost of living – something Lucas defiantly maintains his budget delivers, albeit in the “aggregate”, despite a raft of previously announced fee and charge hikes and a slew of new taxation measures.

Households will lose money in – for example – new rego costs and increases in hospital carparking fees, but make savings in “massive reductions in CTP premiums”.

Cost of living, Lucas says, is “our ongoing narrative” and “I don’t shy away from a robust narrative around this area”.

“We have increased fees and charges, but the $90 million Emergency Services Levy remission has continued,” he said.

But that is significantly offset by a change in how land tax is aggregated, which will net the government an additional $40 million a year for the three years from July 2020.

“While the government is reducing land tax rates to increase the competitiveness of the tax system, it also wants to ensure there is equity between taxpayers,” the budget documents state.

“An improved approach to the aggregation of land for land tax purposes will be introduced in South Australia to look through separate legal structures to determine the true owner of land, levelling the playing field for all taxpayers.”

The changes are “designed to minimise the incentive to own properties in trusts to avoid aggregation by increasing the tax payable”, and could set Lucas on a collision course with the state’s Property Council, helmed by his former staffer Daniel Gannon.

“We’ll have, if need be, a robust discussion but always respectful – he’ll need to pay for the coffee at Pranzo’s,” Lucas joked.

But he was bullish about the measure, saying: “We make no apologies for people who are not paying their fair share of land tax… there will be very little sympathy [for them] in the community.”

It’s one of several new taxation measures totalling $35.5 million in the current financial year and rising to around $76 million in each of the three years thereafter. 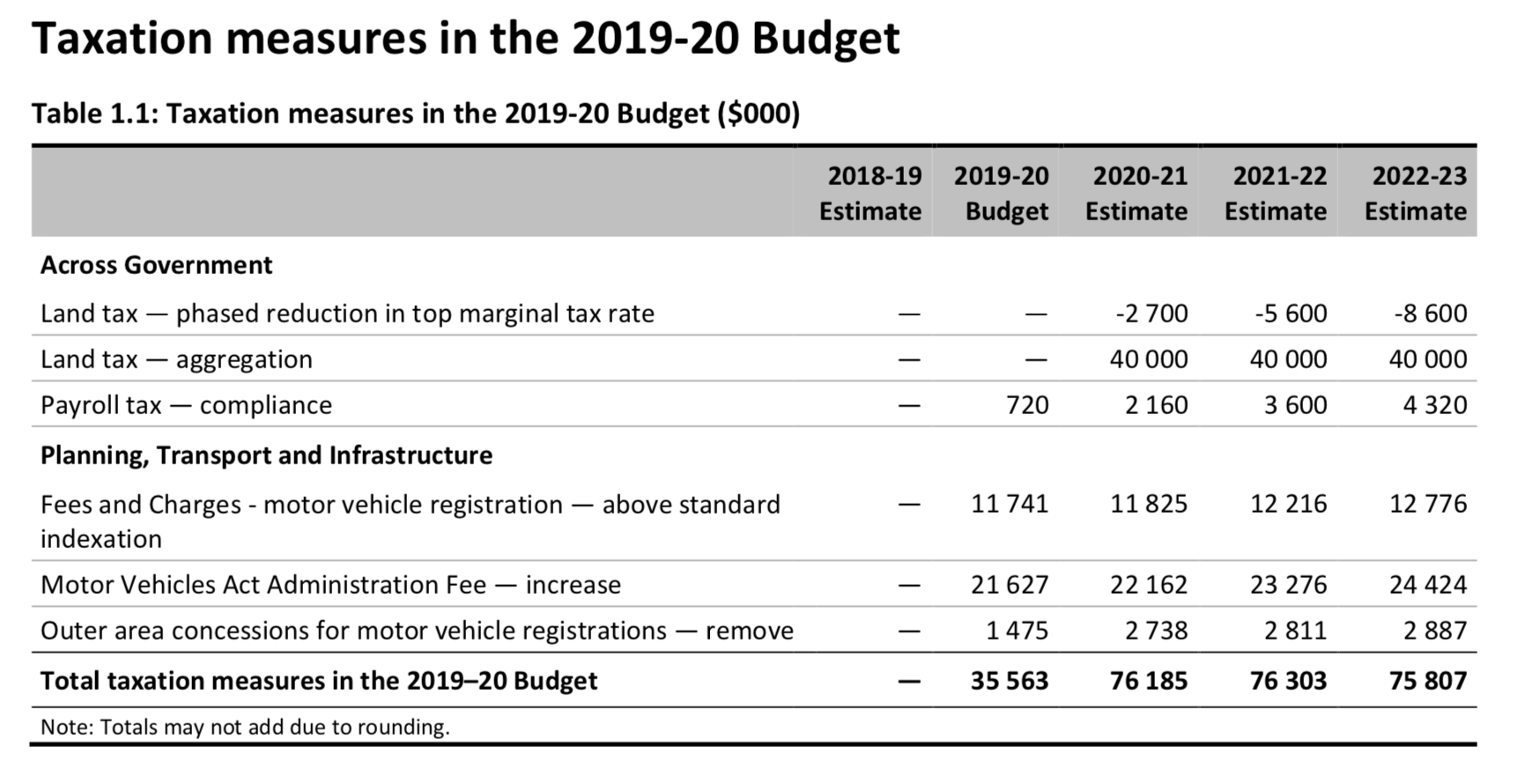 It’s a similar story with payroll tax, a revenue measure long targeted by the Liberals with long-promised exemptions for small and medium sized businesses.

However, again, a crackdown on compliance is expected to boost Lucas’s Treasury coffers by around $11 million over four years.

“While the government has reduced the impact of payroll tax by exempting small and medium-sized businesses from payroll tax, it wants to ensure taxpayers are complying with their tax obligations,” the budget papers explain.

“RevenueSA will develop an additional compliance program focusing on businesses who have failed to register for payroll tax, the use of contractors, the grouping of businesses and other high risk areas.”

Increased motor vehicle registration charges will reap around $12 million a year for the next four years, while a new administration fee levied on all transactions (ranging from a low of $7 to a high of $30) will garner around $22 million a year over the forward estimates.

It’s the first increase in administration fees on motor vehicle transactions since 2011.

More money, $10 million over four years, will be clawed back by the removal of an “outer area concession” for motor vehicle registrations, which will affect motorists in areas such as Coober Pedy, Roxby Downs and Kangaroo Island.

“Removal of the concession will ensure that all residents in regional and remote communities pay the same motor vehicle registration fees,” the budget states – although it continues a theme of Lucas’s last outing, where savings measures hit state seats vital to the Government’s political survival.

Last year it was Service SA closures hitting a cluster of marginal Liberal-held seats in the north-east suburbs; this time round the pain will be felt in the state’s most marginal seat of Mawson, held by Labor’s Leon Bignell with a 0.3 per cent margin.

Money will also be clawed back with a one-off 5 per cent increase to motor vehicle registration fees and charges and an increase in the solid waste levy in the metropolitan area to $110 per tonne from July 1, rising to $140 per tonne from January next year.

“This increase will eventually raise about $24.8 million per annum once fully implemented,” the budget states.

Programs and projects such as the Adelaide Fashion Festival and Brand SA have already fallen victim to the axe, with Lucas warning a list of others will fall by the wayside.

Net debt will spiral from $13.5 billion in 2018-19 to $21.2 billion in 2022-23, as the Government invests in “productive infrastructure” such as a newly-announced $104.5 million housing stimulus package, including $42.5 million in direct government spending and the provision of interest-free deposit gap loans from HomeStart.

“It is estimated that the support package will result in around 170 new housing contracts being entered into and around 120 housing outcomes for those struggling to buy an established property,” Lucas said, delivering a budget speech in the unfamiliar surroundings of Parliament’s lower house.

In their long tenure in Opposition, the Liberals frequently derided Labor’s budgets as marked by “debt and deficit”.

In Government, while they’ve eschewed the latter, Lucas is unashamedly embracing the former.

Lucas forecasts a “modest” surplus for each of the next four years.

“All of it has to be funded – all has to be driven by what we’re borrowing or commonwealth grant programs.”

That’s helped by $853 million in federal grants being brought forward “for their own reasons”, according to Lucas.

“We could have ended up reporting an $800-900 million surplus in 2018-19, which would have been ridiculous in terms of the state’s finances.”

He said of the GST hit that it “reflects both weaker than expected national GST revenue due to weaker national consumption expenditure and dwelling investment, but also a deterioration in South Australia’s share of GST grants due to a decision by the independent Commonwealth Grants Commission”.

“The softer than expected housing market has also meant a further write down of expected conveyance duty of $184 million over four years to 2021-22 since the 2018-19 mid-year budget review. This is in addition to the $107 million write down [in December].”

This gives Lucas impetus to continue seeking wage restraint from truculent unions, insisting “we don’t have the money to afford 3.5 per cent pay increases”.

However, despite constant talk of public service cuts, the overall number of FTEs is set to rise back to 84,565 – almost at the level it was when the Government took office – by 2023.

“I’ve always cautioned you that these numbers are notional only,” Lucas said.

“Agencies have to achieve a savings task – if they achieve the bulk of it by FTE reductions then these are the total numbers of FTEs.

“What we can report is that the increase in our first year [of office] was massively reduced… we’ve not achieved all that we wanted to achieve because of the budget pressures, in particular in relation to health.”

But he is adamant that “back office staff, corporate staff, admin staff, non-frontline staff” will be cut to make way for “a very big increase in teacher and school support staff” needed to implement the state’s Gonski commitments and the Liberals’ pledge to transition Year 7 to high school by 2022.

“It will have to be offset by cutbacks across other areas to cater for that massive growth in teacher numbers,” he said.

On health, he said the savings task was “probably courageous, if I may use a term familiar to viewers of Yes Minister”.

However, while the Central Adelaide Local Health Network will continue to be bailed out this year, savings had already been achieved by a recduction in the use of agency nursing staff and a crackdown on “sending invoices to the commonwealth to get paid for them”.

“Our systems down there, the culture down there was so bad we just weren’t sending the bills off to the commonwealth to get the money,” he said.

“It just seems commonsense…but these are the sorts of headline changes to try and drive down the cost base of CALHN.”

Lucas said his budget, while “modest”, sounded “an optimistic note”.

“We believe with a combination of interest rate and income tax reductions, big employment growth prospects and major infrastructure projects, this budget outlines not only a massive building infrastructure program but an optimistic future for the state,” he said.

Past budgets have been variously described as wearing a sexy red dress (Labor’s last under Tom Koutsantonis) and a business suit with sensible shoes (Lucas’s first).

This year, when asked the inevitable question, the Treasurer was prepared, saying it was a budget decked in “overalls and a high-vis vest”.

An appropriately modest assessment, then.