Cecilia* is an employee of the western suburbs centre, which InDaily has chosen not to identify.

She said pro-life religious groups and protesters congregate outside the centre up to three days a week, sometimes with banners and shouting phrases such as ‘save the unborn’.

“There’s one group that are here for 40 days – they’re called 40 Days for Life – and they have posters and are sometimes reading the Bible, but it can be quite distressing for women,” she said.

“Some of the religious groups have pictures of a fully-formed baby on their placards, and would say ‘save the baby’ or ‘save the unborn’ to women driving into the clinic.

“I know there have been some men that just stand right outside the gate or just outside the premises, and one time one of them took my photo.

“That’s how they became a bit more menacing.

But the leader of pro-life group 40 Days For Life Adelaide, which regularly gathers near the clinic, denied that any members filmed or photographed individuals, while vowing to fight safe access laws if passed by Parliament.

“The clinic maintains that some of their clients and staff are being harassed but I’ve not seen that, and I’ve spoken to people on occasion who were supposedly the subject of this complaint and they emphatically denied it,” Alan Tyson said.

SA Health states on its website that the centre provides: “pro-choice, non-judgemental, women centered (sic) and understanding health services for women with an unplanned pregnancy including abortion.”

Most public hospitals in metropolitan Adelaide and some private obstetricians and gynaecologists also offer abortion services, but the centre is a stand-alone building.

General criminal law and the Summary Offences Act 1953 can offer some protections to individuals who feel harassed or unsafe in these situations in South Australia, but there are no safe access zones specifically targeting abortion clinics.

Proponents of safe access zones claim individuals entering or leaving an abortion clinic could be better serviced under a safe access zone policy that would protect them from harassment, while also charging those who skirt restrictions.

Examples of these restrictions used interstate include:

In Australian states where safe access zone laws are enacted, individuals who violate these restrictions can face up to 12 months in jail and $16,500 in fines.

Cecelia said she would welcome safe access zones because it would limit the behaviour of protesters at her work.

The proposed legislation included the introduction of safe access zones that would specifically benefit employees and visitors to the centre.

“Since [1969] there have been significant advancements in medical technology, and a significant shift in community attitudes,” Chapman said.

“It’s important that we hear the views of regional communities – to ensure that the Law Reform Institute fully appreciates how the current laws apply, not just in regional areas, but across South Australia.”

One area SALRI has been asked to include if safe access zones.

“This Bill contains provisions for a safe access zone,” she said.

“It provides that protection for 150 metres around prescribed areas, including, of course, that clinic.

“When I worked there I did self-protecting things, like avoid walking in front of the groups, or avoid allowing them to become familiar with my car,” she said.

“The protesters made me feel harassed and unsafe, and I felt very disturbed by clients who were also experiencing harassment from them.

Protesters outside the centre in 2012. Photo: Supplied

“The police were called regularly, particularly when the protesters had videos.

“But it was difficult to do anything because by the time the police came they’d be gone.”

In 2010, the City of Charles Sturt introduced General By-Law permits, which Cecelia said was “instrumental” in helping the centre limit the activities of protesters immediately outside.

This permit is given to “Street and Road” activities that sit outside other kinds of permits, and has limitations on where these activities can take place.

One of the activities listed under this permit are parties that “conduct a public exhibition or display”.

The permit states there is a specific location that allows for a “prayer vigil” to occur.

Cecelia said this location was “about 50 metres away from the centre”.

The council said in a statement it had a responsibility to “ensure the safety of the community when accessing services”.

“We partner with the Central Adelaide Local Health Network and SAPOL to ensure no one feels unsafe or threatened when attending a medical appointment,” it said.

The council said 17 general by-law permits had been issued to one group that participate in a religious activity for “40 days, twice a year”.

40 Days for Life is an international pro-life advocacy group.

Its Adelaide branch hold vigils outside the centre twice a year.

Branch leader Alan Tyson told InDaily members campaign through “prayer” not “protest” but did what they could to “protect the rights of the unborn”. 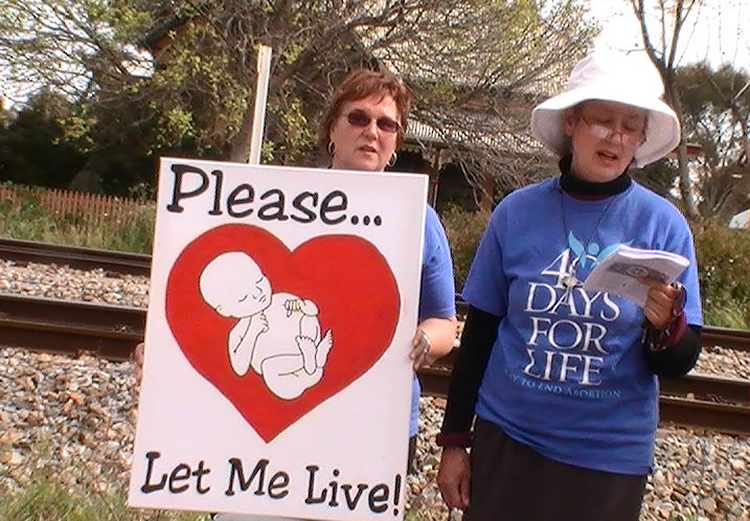 From the 40 Days for Life Adelaide webpage

“We don’t do harassment or do anything like that.”

SA Police told InDaily it had been called to the centre four times since March 6.

On those occasions, “police were responding to complaints about the protest group praying outside the centre,” their statement said.

“There were no arrests.”

Brigid Coombe said employees called the police “regularly” and particularly “when the protesters had videos”.

“We welcome safe access zones because not being allowed to be filmed will give a great deal of reassurance to everybody,” said Coombe.

“I think people feel very uncomfortable about being filmed when you are concerned that the purposes of that videoing by a stranger is to harm you in some way.”

“You’ve got these people in the community who think it’s an OK thing to stand outside, comment to women, take their photos, film them, make haranguing approaches,” said Baird.

“We at the SAAAC support safe access zones because this is a problem.”

“If we were in the United State of America none of these safe access zones would be lawful,” he said.

“They would be illegal because the United States has the first amendment to the constitution which guarantees the right of free speech.

“The best we have is an implied right of political communication.”

Bob Turnbull is a pro-life advocate who has protested at State Parliament since Chapman initially proposed reforming SA abortion laws.

He also visits the Adelaide abortion clinic up to twice a week during the 40 Days for Life campaign.

Turnbull said he would challenge safe access zones if passed by Parliament.

“We are trying to speak to parliamentarians to challenge that proposed legislation,” he said.

“We say prayers for the people going into the clinic and the babies being killed, but we don’t shout at anybody.

“I think they [the women at the clinic] are trying to get rid of us. I think they are making spurious comments.”

*Name has been changed.