The Coalition warned during the election campaign that the Labor Party’s proposed 50 per cent renewable energy target would increase power prices.

Deputy director of the SA Centre for Economic Studies at the University of Adelaide, Steve Whetton, told InDaily the Coalition’s re-election pitch lacked detail on its plans for the renewable energy industry, and that failing to provide certainty risked a medium-term investment strike that would necessarily result in higher power prices for South Australian businesses.

“It’s fairly important for the government to announce firm policies quite soon because uncertainty about policy has almost as bad an impact as bad policy,” he said.

“People aren’t going to invest if they don’t know what the market’s going to look like (and) anything that discourages renewable investment will push up power prices.

“You would certainly expect to see investment slow … in the medium term.”

He cited the renewables investment crash of 2013-14 – which came after the then-Abbott Government commissioned a review of the national renewable energy target.

Whetton said renewable power is now simply cheaper to produce than energy produced by fossil fuels and that, therefore: “Anything that discourages renewable investment will push up power prices.”

He said new solar and wind projects were producing power at about $60 a megawatt hour, while gas costs between $80 and $120/MWH.

“More renewables are going to bring down power prices because they’ve got a lower marginal cost,” said Whetton.

“A grid with 50 per cent renewable power will certainly have lower power prices than one with the current generation mix.”

Whetton pointed to the dramatic collapse in renewable energy investment that occurred in 2014 after the Abbott Government commissioned a review of the national Renewable Energy Target.

He told InDaily that the Coalition had actually presided over the largest investment in renewable energy in Australia’s history over the past 12 months.

But he said investors who were expecting a Labor victory, in line with years of published polling, will now take “five steps backwards and look at the increased political risks”.

Chief executive Kane Thornton told InDaily the Liberal Party went to the election with an “energy policy void” but that “ironically, the lack of a coherent energy plan is only likely to encourage more and more households and businesses to invest in solar and batteries”.

The Liberal Party’s election policy document warns against Labor’s renewable energy target, warning that it – along with its 45 per cent emissions reduction target would “cost the economy $472 billion, slash more than 336,000 jobs, cut the average wage by over $9,000 and increase wholesale electricity prices by more than 58%”.

Nonetheless, Taylor argues that the Government policies are responsible for record levels of investment in renewables over the past year.

“Data released in March 2019 shows that clean energy investment was at its highest ever level in 2018, setting a new record of $13 billion,” he said, dismissing fears the Government’s re-election pitch would undermine the upward trend. 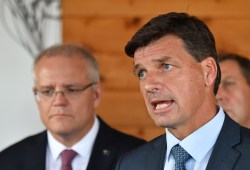 “This investment is expected to continue, with the latest figures from the Clean Energy Regulator showing more than $25 billion of committed investment in 18.8 GW of new wind and solar over the period 2018-20.

“New investment in renewable energy generation lifted the share of renewables to 19 per cent of Australia’s total electricity generation in 2018, up from 15 per cent in 2017.

“The Government has also invested $1.42 billion in reliable renewable generation and storage, supporting a high-tech expansion of the Snowy Hydro scheme and the development of Marinus Link – the second Bass Strait interconnector needed to turn Tasmania’s Battery of the Nation vision into reality.”

Taylor added that the Government was supporting storage technologies to provide “back-up power for intermittent renewables”.