Police confirmed that a 58-year-old man from West Lakes was arrested at 11am for trespass and received a caution and an order not to return within 24 hours.

“We were standing there at the gate … I was trying to talk to the project manager about traffic control,” Fenney told InDaily.

“A car tried to get in – I was just standing there.

“They (police) asked me to move and in the end they arrested me.”

He said he was taken to a police station and issued with a caution.

It follows the removal of CFMEU organiser Clarence Fellowes by police from the site yesterday morning.

Police officers had asked Fellowes to leave and issued him with a trespass order, preventing him from returning for 24 hours.

Fenney said the union would return to the site to ensure that workers are being protected from asbestos found there.

Save Shed 26 campaigner Emma Webb told InDaily this morning that protesters were blocking an entrance to the site and that police ordered them to move out of the way.

“The police said they’re trying to prevent people from blocking (the) entrance of cars and vehicles to the work site,” said Webb.

“A number of union members and community members stood in front of the gate.

“Then the police asked people to move and then they arrested (a man) for not moving from in front of the gate.” 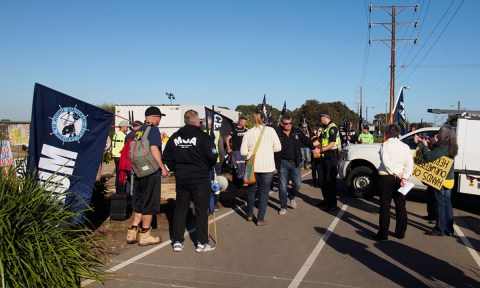 The Save Shed 26 campaign has argued the building should be adaptively reused as part of Cedar Woods’ Fletcher’s Slip housing development.

Cedar Woods has argued there is no “viable” way to adaptively reuse the building.

Webb said campaigners had now left the site, but would return later to continue protesting the demolition.