During ABC’s Q&A program on Monday, Shorten told how his mother wanted to become a lawyer but instead took a teaching scholarship so she could look after her younger siblings.

The Daily Telegraph today attacked Shorten in a front-page article headlined “Mother of Invention” saying he “omitted the fact” that she went on to an “illustrious career as a barrister”.

Shorten told reporters that the description was far from the truth – his mother had got about nine legal briefs in her time and struggled in the face of discrimination.

“It was actually a bit dispiriting (for her),” he said.

“She had wanted to do law when she was 17. She didn’t get that chance. She raised kids. At 50, she backed herself … but she discovered the discrimination against older women.

An emotional @billshortenmp has hit back at 'gotcha s**t', after the Daily Telegraph published a story about his mother pic.twitter.com/8SLsb2cB7Z

Prime Minister Scott Morrison said Shorten would have been very hurt by the News Corp Australia story and the election should not be about MPs’ families.

“Bill lost his mother five years ago and I can understand that that would have upset him a great deal,” he said.

“I would only extend my best wishes to him.”

He said the election should be focused on the choice between himself and Shorten as prime minister.

“This election is not about our families,” Morrison said.

Shorten said his single mother worked as a teacher for three decades before studying law when he and his twin brother were at university.

“I can’t change what happened to my mum. But I can change things for other people. And that’s why I’m in politics.”

The story has also caused consternation within News Corp, with prominent conservative columnist Andrew Bolt writing today that he understood Shorten’s anger at the Telegraph.

“I note that the Herald Sun, my employer, chose not to run this story,” he wrote. “I support that decision.”

Other News Corp newspapers, including the Courier-Mail in Brisbane and The Advertiser in Adelaide, republished the Telegraph story. 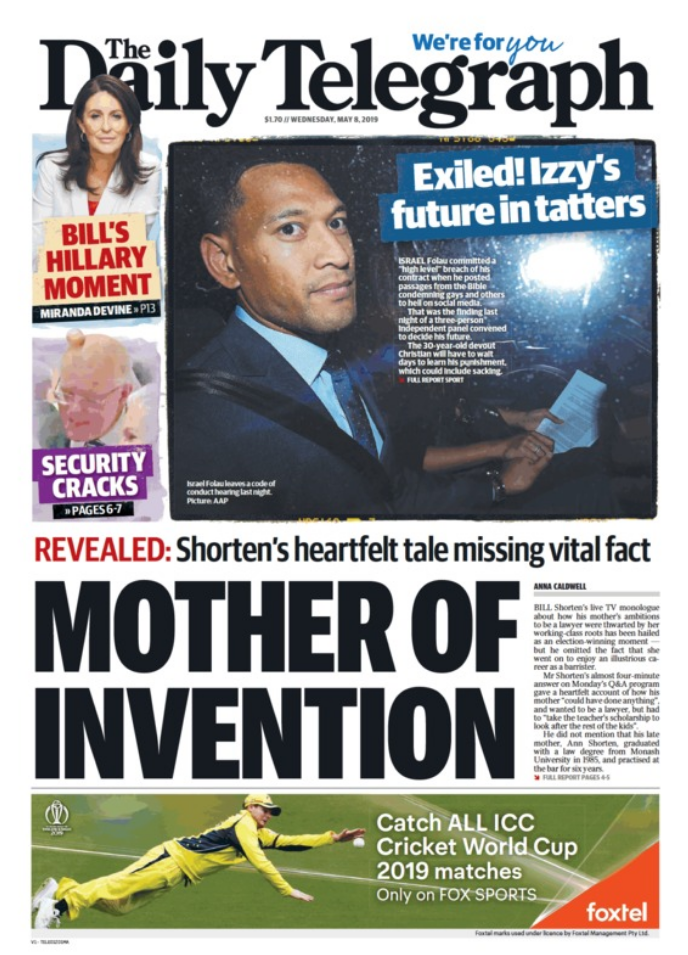