The three steel masts have formed part of the façade of the former Port Canal shopping centre, which is being razed to make way for the $45 million two-stage redevelopment of the renamed Port Adelaide Plaza.

Clipper Ship City of Adelaide director Peter Christopher said he received a call from the Port Adelaide Plaza marketing team on Tuesday night, asking if the masts would be of use in the ship’s restoration.

He said details of how the masts would make the 1km journey down Commercial Rd and St Vincent St to the clipper’s current home at Dock One near Todd St were still being finalised.

“Wednesday morning I took one of our engineers and our trade supervisor to have a look at them and we met the site manager form BADGE who are doing the work down there, and we thought we could use them,” Christopher said.

“They are not identical to what the ship had – the masts on the ship were 40-metres tall whereas these are probably closer to 20.

“But it means we can get masts up on display much sooner than we otherwise would have been able to.” 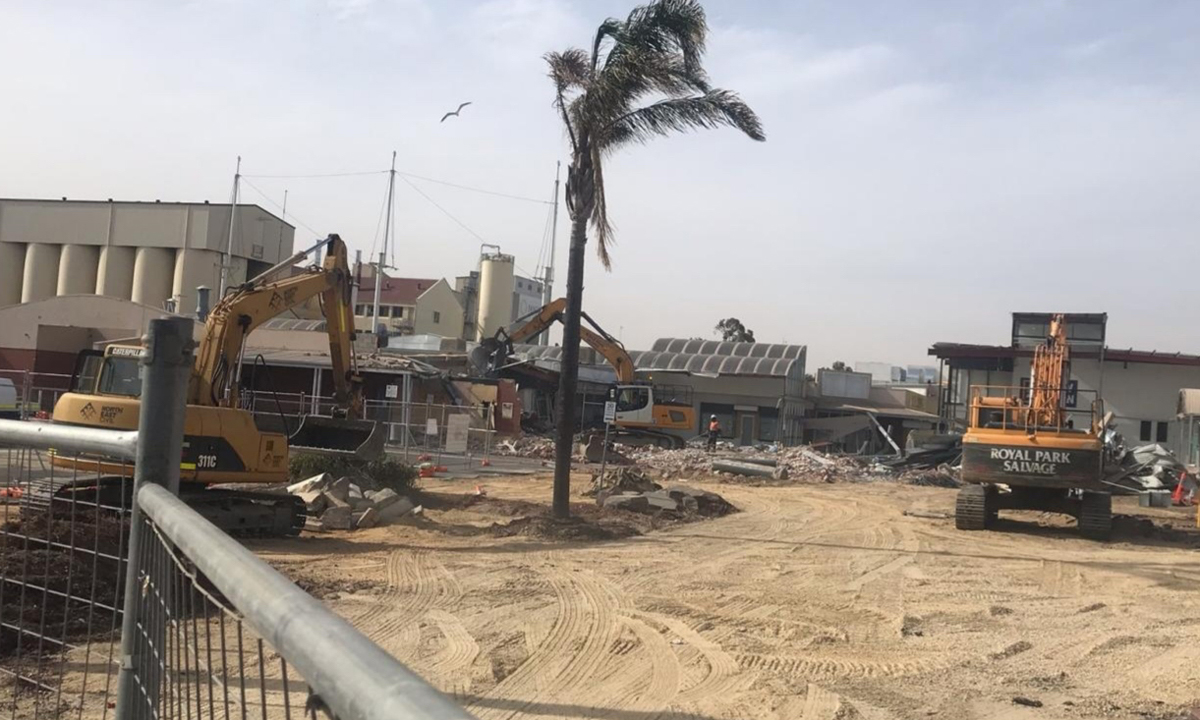 Believed to be the world’s oldest surviving clipper ship, the City of Adelaide made 23 annual voyages taking settlers bound for South Australia from London and Plymouth to Adelaide between 1864 and 1887.

On the return voyages it carried passengers, wool, and copper from Adelaide and Port Augusta to London.

The ship was later used as floating isolation hospital at Southampton, a coal freighter and as a navy vessel before being decommissioned in 1948 and towed to Glasgow.

It arrived in Adelaide in February 2014 in time for her 150th anniversary after a 22,000 km trip aboard a barge and heavy-lift cargo ship from Scotland following a long campaign to bring the clipper ‘home’.

A dedicated team of volunteers has spent the past five years cleaning out and repairing the City of Adelaide’s hull and has relied on donations, sponsorship, paid guided tours and merchandise sales to pay for the restoration.

“One of the comments we get often from people is that they drive past but they can’t see much happening because most of the work we are doing is on the inside of the ship,” Christopher said.

“So we’re really keen to get something up and visible because it will lift our profile dramatically, and people will be more likely to come and undertake tours and help us generate income.

“But we won’t be able to fit them immediately – until a few days ago we didn’t even know that they were available – because there’s stuff we need to do to prepare the ship to receive the masts and it’s a bit complex.”

Those complexities include the constant struggle to raise funds to pay for the ship’s restoration, and uncertainty about the City of Adelaide’s long-term home. 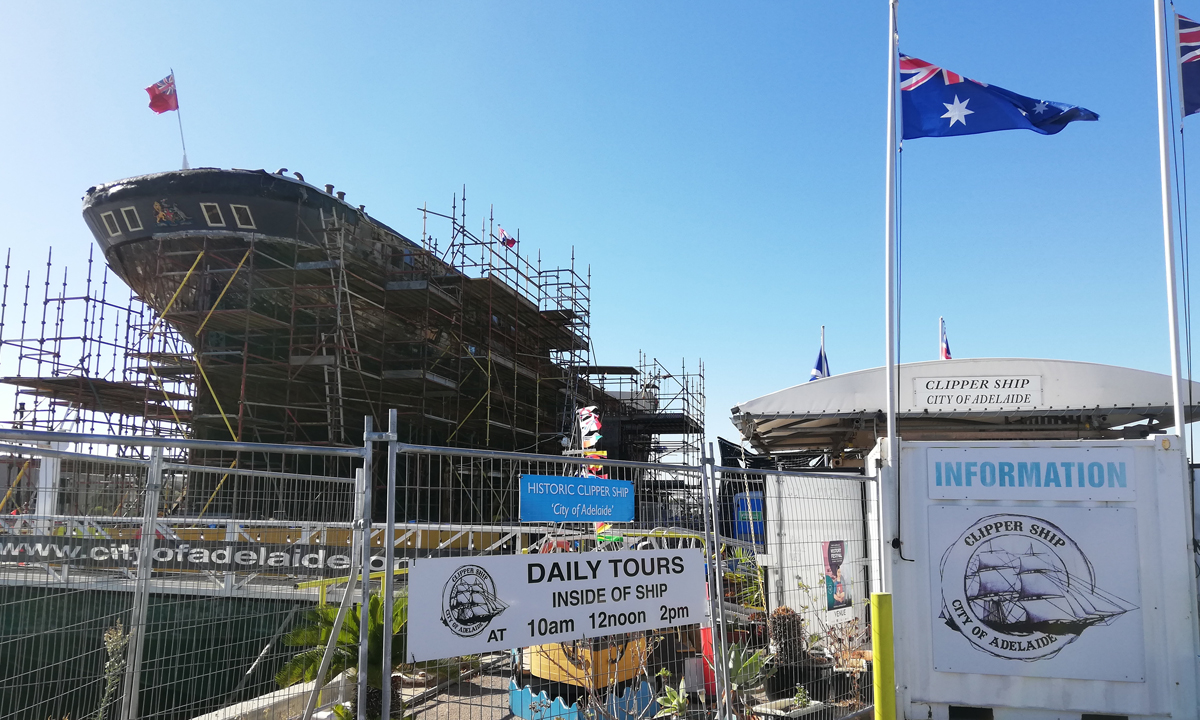 The ship, which sits on a barge at Dock One, is being forced to move to make way for the 750-home Starfish development possibly before the end of the year.

The not-for-profit organisation Clipper Ship City of Adelaide Ltd is negotiating with the State Government’s Renewal SA about a new site.

Christopher said that move would potentially involve the barge having to pass under either the Birkenhead or the Tom ‘Diver’ Derrick Bridge, which would be more complicated with tall masts up, despite both being opening bridges.

However, he said the likely need to cut the masts in half to allow for easier transportation would also enable the masts to be erected in sections, with the lower portions possibly put up ahead of the move.

“I’d be very keen to get the masts up quickly but it’s subject to the income to do it with, the technical work we have to do on the ship to receive the masts and the third issue of moving the barge and when and how we do that,” he said.

“What we’re hoping will happen is they will be able to be put on the back of a semi-trailer and a crane will lift them off and put them on the ship or on the barge, and that could occur in the next couple of days.

“Then we’ll look at whether or not we can fit the lower section of the masts and not the upper section until after the move, and that will solve the bridge issue.”

Sydney-based Precision Group bought the Port Canal shopping centre in 1998 and recently renamed it Port Adelaide Plaza ahead of the 29,500sq m redevelopment, which it says is the most significant retail development in Port Adelaide in more than a decade.

Christopher said the donation of the replica masts would allow part of the old Port Canal centre to live on in the community.

“With the demolition of the old Port Canal shopping centre and the building of the new there’s a loss of what the community saw as that sense of history and the movement of the masts and their continuation on a historic ship is exciting,” he said.

“It will be a long time before we can put full-sized replica masts on and so these will likely be up for some time, but even when they come off we might be able to use one as a bowsprit out the front of the ship.”

Restoration work on the clipper includes the addition of mounted displays throughout the ship ranging from a bible owned by one of the ship’s original captains in 1876, to a wheel that was on the ship when the Royal Navy had, it through to a nursing display recognising its years as a hospital.

“The ship had a saloon deck, which was home to about 30 first class passengers on each journey and we’re currently about a third of the way through renovating that entire deck,” Christopher said.

“We’ve cleaned up the hull below where the cargo was stored to the point where we’ve started taking people down and in the next three to six months we’ll have a proper walkway in there for tours.

“When we first got the ship it took us over a year to clean it out inside before it was safe to take people in, so I suppose that was the initial job, and last year we had 25,000 people visit the information centre and took 5000 people through on tours.”

Volunteers run three tours every day and are introducing self-guided weekend tours of the City of Adelaide in May as part of the History Festival.

On May 12 the clarinet section of the Navy Band will play inside the ship to entertain people taking tours.

Precision Group was contacted for comment but did not respond before deadline.