The Controlled Substance (Youth Treatment Orders) Amendment Bill, introduced by the Marshall Government last year, would give the Youth Court the power to request that a drug or alcohol-dependent young person attend a treatment service.

If that person failed to follow court instructions, the Youth Court would have the power to detain them for up to 12 months for mandatory treatment.

Wade has previously said that children would only be detained as a measure of last resort.

He also said he expected most orders would be “much shorter” than 12 months, and that elements of the Bill would be rolled out in stages.

But key advocates, including the Guardian for Children and Young People, the Aboriginal Health Council of SA, the SA Network of Drug and Alcohol Services and the Youth Affairs Council of SA, have raised concerns about where young people would be detained if the legislation passed.

There are concerns that children sentenced for mandatory drug treatment could also be detained at the Cavan centre – the state’s only facility purpose-built for the mandatory detention of young people.

But Wade has ruled that out, telling InDaily that “it’s not intended that people would be put in a youth training centre to fulfill the detention order”.

“A lot of the concerns that have been raised have been misconceptions of the way that the bill is going to operate,” he said.

“This is not a punitive bill, it’s a therapeutic bill.

“As a result of this legislation, young people might find themselves in a youth training centre because of the youth justice process, but not through the youth treatment process.”

Asked where children would likely be detained instead, Wade replied: “In another facility”.

He said the State Government hadn’t yet determined whether it could use a pre-existing facility, or whether it would need to build a new purpose-built treatment centre.

The Government is also unsure of the number of children likely to be detained under the proposed legislation, or the subsequent impact on taxpayers.

Wade said that information would be provided in a model of care consultation paper currently being drafted by government departments and is due to be released by the end of this year.

He said the Government would then invite “broad” consultation on the paper from families, children and young people, clinicians, nurses and stakeholder organisations.

But advocates say non-government experts should be included in drafting the model of care consultation paper.

“If the Bill is intended to be therapeutic it should be developed by therapists,” he said.

“The intent of the Bill is unclear and at face value does not speak to “last case” least intrusive (or) best interests (for children).

“If the Bill was put out to consultation these concerns of the sector and the wider stakeholders (including) AOD (alcohol or drug) workers, lawyers, media profession, psychologists, social workers, welfare workers, could be addressed.”

Youth Affairs Council of SA CEO Anne Bainbridge agreed, telling InDaily “sector consultation of both the Bill and the model of care is crucial”.

“Effective consultation would include youth sector workers with experience working with young people at risk, in particular those who have issues with alcohol and other drug dependence, and young people who have lived experience,” she said.

“Where the model of care has not been developed, or consulted on, we don’t understand why the legislation is being debated in Parliament at all,” he said.

“How the Parliament can sensibly assess the Bill when the Government doesn’t know how it will actually be implemented, and what impact it will have on the lives of the most vulnerable in our community?

“Overall, there are more questions than answers in what the Government is proposing.”

Wade indicated that the Bill, which has bipartisan support from Labor, would not go to a vote in parliament until the Government had consulted on the model of care.

“We want to do this properly, because it is important for the young people who are drug dependent,” he said.

Guardian For Children and Young People and Training Centre Visitor Penny Wright welcomed the delay in the vote but also urged the Government to consult with “key independent agencies with expertise in drug dependence or the needs of children and young people in the design of the model before it is released”.

“It is always better to have input beforehand, to avoid scrambling for changes and avoid unintended consequences,” she said.

Wright’s office this week published a report outlining concerns raised during its visits to the Adelaide Youth Training Centre.

The office found that the AYTC administration had failed to adequately record details of unclothed searches “with respect to factors such as recording the age of the resident and the time and reason for an unclothed search”. 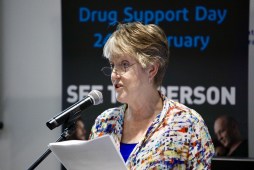 The report said the centre had since changed its recording process to reflect the legislated requirements.