In a post on the Department of the Premier and Cabinet website titled “New artistic directions and traditions”, chief executive Jim McDowell begins by talking about a family tradition of wandering around the Garden of Unearthly Delights during Mad March, when Adelaide’s arts and culture scene is “abuzz with activity”.

He acknowledges the “great job” festival organisers do in offering something for every age and varying tastes, and the value of the arts sector as “a significant economic lever”.

McDowell, who has responsibility for Arts South Australia after the Government decided last year to abolish the position of Arts SA executive director, goes on to write that his current focus is the development of a new five-year Arts Plan, on which public submissions are currently being sought.

After making a number of observations about SA’s arts sector and the opportunities and challenges it faces, he adds:

“Once the Arts Plan is completed in June 2019, we may have some big decisions to make.

“It’s my opinion that we’ve previously had an adhoc approach and this is our opportunity to make more conscious and strategic choices.

“I feel that we may need to reconsider the activities we invest in and deliver fewer things better instead of spreading our resources too thinly.”

The Arts Industry Council of SA (AICSA), an independent industry organisation which represents around 100 arts and cultural organisations and independent artists, supports the concept of a state Arts Plan, saying it provides an opportunity for artists and arts organisations to communicate with government about their priorities and ideas.

However, executive committee member Emma Webb told InDaily that some of McDowell’s comments were of concern.

“Of course, any exercise in visioning a future can mean things get shaken up and re-looked at,” she said.

“However, it is very concerning to read these comments from Mr McDowell, as it does raise the question of whether there are some outcomes of the Arts Plan that have been pre-determined and whether further cuts to the arts, in addition to the forecast cuts already in forward estimates, can be expected in the June state budget.

“It does feel amongst this statement, even with Mr McDowell’s obvious enjoyment and appreciation of the arts, that there is a definite signalling of reduced resources.

“It’s really difficult for the sector to think outwardly and be aspirational under a cloud of the DPC investing in fewer things.”

McDowell told InDaily this morning that he rejected any suggestion that some outcomes of the plan had been pre-determined or that it would be used as a tool for downsizing.

“My comments were a personal reflection on the arts sector, nothing more. No aspect of the Arts Plan has been pre-determined, and the extensive consultation process is ongoing.”

Asked to elaborate on what he meant by the comment that the State Government may have some “big decisions” to make when the plan was completed, he said: “Given this is the first major review into the sector for nearly 20 years, it’s reasonable to expect wide-ranging recommendations or insights may be made.”

Independent consultants were appointed in January to lead the development of the Arts Plan, with McDowell saying in his online post that they are “carrying out a situational analysis informed by other jurisdictions and are re-assessing our priorities to determine where we need to focus our limited resources”.

Among his observations, he notes that Adelaide’s institutions have a large percentage of their collections in storage and ponders whether there might be ways to “display more of this wealth of cultural material in less conventional ways”.

The fact that the vast majority of the Art Gallery of SA’s collection is in storage was often cited by former gallery director Nick Mitzevich in his push for an Adelaide Contemporary gallery on the old RAH site, plans for which were shelved by the current government in favour of an Australian National Aboriginal Art and Cultures Gallery.

McDowell writes that he has also observed opportunities for “better synergy” between SA’s institutions in areas such as scheduling, communications and promotional costs.

He adds: “In fiscally restrained times, we have added challenges to address such as the availability of large scale venue infrastructure, declining sponsorship opportunities and the enduring challenge to make access and attendance affordable for audiences. 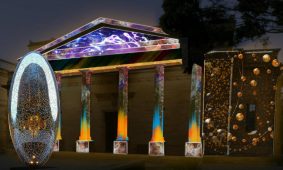 Webb said artists and arts organisations were constantly asked to do better with less, with parts of the arts sector “really at the precipice of too few resources”.

“An Arts Plan driven by an imperative to reduce public investment and commercialise artistic practice will not serve the future development of artists in South Australia well.

“It’s not what should drive a government arts strategy, if it wants to be visionary rather than a tool for downsizing.”

The State Government says the Arts Plan will “guide its support” for the arts over the next five years. The deadline for written submissions has been extended by two weeks until April 12, with an online survey planned in April and May, and a YourSay discussion board open until June 1 (details here).