Defence Minister Christopher Pyne declared last December that the percentage of “Australian content” in the $50 billion submarines deal with French Naval Group would be well above 60 per cent.

“This will be a local build. A local build is defined as being around 60 per cent plus,” he said. “That’s what we’ve achieved on the Collins class.”

However, the Defence official in charge of the project to build the 12 new submarines said today that no percentage had been fixed.

Under questioning in an Estimates Committee by South Australian Labor Senator Penny Wong, the department’s general manager submarines and deputy secretary, Stephen Johnson, said it was too early to fix a percentage.

“It’s a flawed strategy to set a per cent before you have enough information to understand.”

Johnson said a percentage figure had never been put on the table in discussions with the Naval Group.

When asked by Wong why Defence Minister Pyne would have publicly announced a 60 per cent figure, Johnson said: “I don’t have a way of answering that.”

However, Johnson insisted the final percentage of Australian content would end up to be a “very fulsome number”.

Johnson appeared to suggest that when Pyne first made the 60 per cent claim in 2016 “we were very early in all this process”.

“It will be a very fulsome number – but it’s flawed to make the decision now,” he said, arguing he had discussed the situation with the minister, who “reiterates” a build with “maximum Australian content consistent with cost and schedule decisions”.

SA Opposition Leader Peter Malinauskas said the comments constituted a “stunning revelation which raises serious questions about just how many jobs and work on the Future Submarines will go to South Australians”.

“Christopher Pyne has frequently promised the local content guarantee would be at least 60 per cent… this wasn’t pitched as a target or an ambition, it was sold to South Australians as an iron-clad guarantee,” he said in a statement.

“Today Rear Admiral Stephen Johnson has exposed those claims as false – not only is there no local job requirement, it wasn’t ever part of the negotiation process.”

Pyne said in a statement to InDaily: “We will not be lectured to by the Labor Party, who didn’t commit to build a single naval vessel in Australia in six years.” 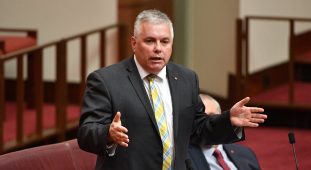 “It’s the height of hypocrisy for Labor to criticise the Coalition given their inaction led to shipbuilding job losses… it is the Coalition’s policy to maximise Australian Industry Content for our Attack class submarines.”

He said the subs would be built at Osborne “generating an annual average of 2,800 jobs” and “to date, Naval Group has engaged with over 1100 Australian suppliers and pre-qualified 169 for the program”.

“The Coalition is creating shipbuilding jobs and opportunities for industry – the only thing Labor created was the Valley of Death,” he said.

The latest revelation comes just a day after a senate hearing was told SA-based submarine-builder ASC has been directed to investigate a series of options for shifting hundreds of jobs involved in Collins Class submarine maintenance to Western Australia.