In a submission on the Controlled Substance (Youth Treatment Orders) Amendment Bill currently before state parliament, the Castan Centre for Human Rights Law at Monash University in Melbourne said the South Australian Government risked breaching international human rights standards, including by arbitrary deprivation of liberty, deficiencies in due process and failure to take account of a child’s best interests.

The Bill, introduced by the Marshall Government last year, would give the Youth Court the power to determine whether a young person was drug or alcohol-dependent and unlikely to seek voluntary treatment. The court would then have the option of making a treatment order requesting the young person attend a treatment service.

If the young person failed to follow court instructions, the Youth Court would have the power to detain them for up to 12 months for mandatory treatment.

In its submission published last week, the Castan Centre described the proposed detention of children as “manifestly excessive”.

It said the Bill failed to provide detail of the treatment children would be subjected to while in detention, or limit the imposition of a detention order as a measure of last resort.

“The proposed powers contained in the Bill to order treatment of a child (and where such an order is not complied with, to detain a child for the purpose of ensuring compliance) constitutes a form of compulsory treatment,” the Castan Centre’s submission states.

“International legal consensus is that compulsory drug treatment poses unjustifiable risks to the rights of those subjected to it.”

According to the submission, detaining children who do not comply with treatment orders would constitute a “punitive and disproportionate” criminal sanction that would contravene South Australia’s obligations under the Convention of the Rights of the Child and the United Nations Standard Minimum Rules for the Administration of Juvenile Justice.

The submission says the Bill also fails to grant detained children access legal assistance or opportunities to have their views expressed during proceedings.

Castan Centre policy manager Eleanor Jenkin told InDaily her team was compelled to write a submission to the South Australian Government as it believed the Bill was “particularly problematic” from a human rights perspective.

“The South Australian Bill is unprecedented – there isn’t anything else like it in Australia,” Jenkin said.

“There are provisions in other states and territories, particularly in Victoria and also in the ACT for therapeutic treatment, but you’re talking about orders of a few weeks at maximum.

“The South Australian Bill is really different in two particular ways: firstly, the exclusive focus on drug and alcohol and secondly the time that’s proposed of making orders up to 12 months.”

Jenkin said it was likely children under the guardianship of the Minister, those already familiar with the youth justice system, children with disability and Aboriginal children would be most likely impacted by the proposed legislation.

“Kids who really struggle with drug and alcohol misuse often have a host of really complicated things going on in their lives,” Jenkin said.

“It’s rarely a single issue – there can often by co-morbidities with mental health, disabilities such as intellectual disability, sometimes they just have really complicated lives.”

It is still unclear where children would be detained under the legislation, with Health Minister Stephen Wade currently in the process of drafting the model of care.

Jenkin said it was likely children detained under the legislation would be housed in youth detention facilities.

“At the moment the only facility in South Australia that has the ability to safely house young people in a closed or locked environment is the youth detention facility,” she said.

“My understanding is that the only alternative to youth detention facilities would be to build a new purpose-built facility.”

Wade said in July that he would undertake a “broad consultation process” with the community, treatment providers and health and child protection agencies to inform the model of care.

But Training Centre Visitor Penny Wright, whose office advocates on behalf of South Australian children in detention, told InDaily this morning that she was yet to be contacted by the Government on the drafting of the model of care.

“I would certainly think it was appropriate for my office to be consulted given the roles and functions that we offer and the insights we have gained from visiting youth training facilities over the past 18 months,” she said.

Wade’s office said it made some amendments to its original Bill following a period of consultation. Those amendments included ensuring treatment and detention orders were a measure of last resort and that a detention order be made for the shortest period appropriate.

It said an interagency working group was being formed to develop the draft model of care, which would address stakeholders concerns.

Wade said the concerns from the Castan Centre would “either be addressed in the model of care or are not well-founded”.

“The Bill is not discriminatory,” he said.

“The Bill does not establish any new criminal sanctions or impose additional penalties on children and young people who are subject to detention in a training centre.

“It provides the court with added scope to order medical assessment and appropriate therapeutic treatment where specialist clinicians judge this is required.

The Bill is expected to be discussed the upper house next Tuesday, with Labor offering bipartisan support.

A coalition of social service advocates, including Wright’s office, the South Australian Council of Social Service, the SA Network of Drug and Alcohol Services, the Australian Medical Association, Uniting Communities and the Law Society of South Australia led a push late last year to establish a select committee to inquire into the Bill, but that was defeated in parliament by one vote. 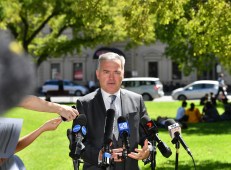 “What we really need to be doing is investing in and boosting those voluntary resources and making sure that there are really comprehensive services to help kids who are vulnerable.

“My hope is that with better resourcing and support for voluntary services there would be much less need to resort to mandatory treatment and detention.”

Data from the latest National Drug Strategy Household Survey shows illicit drug use among 14 to 19-year-old Australians declined considerably between 2001 and 2016.

It shows use of cannabis among young people halved, use of ecstasy and cocaine declined by one-third and the use of meth/amphetamines considerably dropped from 6.2 to 0.8 per cent.