“We did find some of that material may have been destroyed,” Close told a Senate estimates hearing in Canberra today.

Close said both ministers were “at least twice” asked to explain their involvement in the raids.

“We wanted to have the opportunity to speak to them both,” Close said.

Instead, both ministers sent the AFP letters to explain their roles.

The AFP provided Commonwealth prosecutors with a brief of evidence against one person in order to lay charges.

However, prosecutors decided there was insufficient evidence.

“In this case, the Commonwealth DPP determined that despite our best efforts, the brief did not have sufficient prospects of success for them to prosecute,” AFP Commissioner Andrew Colvin said.

“Under those circumstances, the AFP could not in good conscience lay charges.”

Prosecutors must establish conviction prospects “beyond reasonable doubt” before pressing on with a case.

“It’s a high bar and the CDPP took the view that the brief in this matter did not reach that bar,” Colvin said.

Colvin acknowledged the AFP had seen evidence in relation to the union raids during an ongoing Federal Court trial, but said his officers could not compel people to self-incriminate.

“This is not an option open to police in a criminal investigation,” he said. 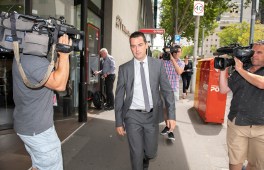 Colvin again expressed his disappointment about the union raids being leaked to the media.

“This is an issue of grave concern to me when AFP operational activity is inappropriately disclosed,” he said.

“As well as the impact on our operations, these disclosures also jeopardise the safety and security of AFP officers.”