The Opposition agreed last week to pass the national security laws before parliament rose for the year, on the condition all of its proposed changes would be adopted early next year.

But Dutton said the government would only accept amendments consistent with the recommendations of the parliament’s joint intelligence committee, which has investigated the bill.

“Labor can try and water it down through whatever means they like – (shadow attorney-general) Mark Dreyfus tried all sorts of games to prevent it from coming on in the parliament – and ultimately Labor got caught out,” he told reporters today.

The bill is designed to give intelligence and law enforcement agencies easier access to encrypted communications used by terrorists and criminals on messaging platforms such as WhatsApp.

Opposition Leader Bill Shorten concedes the laws are imperfect and rushed but has argued he did not want the issue to remain in a vacuum over the summer period. 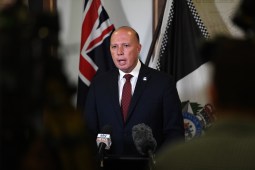 “It is not a perfect solution and to all of those who are concerned about the economic impact of this legislation, we hear you,” Shorten told reporters late last week.

“And we’ve said that we want to review it.”