“We’ve made it very clear we want to see a larger share of the nation’s population growth,” Marshall told reporters today.

Morrison’s first meeting with premiers on Wednesday since becoming prime minister will revolve around population policy.

The PM has a “population framework” in mind but has asked each of the states and territories to come up with areas they want new migrants to go.

Marshall said the SA government was concerned that the state’s population growth was lagging at below half the national rate, something that will result in the loss of a seat and the loss of influence, at the next federal election.

“We want to keep more of our young people in this state. That will have a massive effect on growing our population,” the premier said.

“We also want some targeted skilled migration in regional South Australia to deal with some of the skill shortages that are emerging in those communities.”

NSW Premier Gladys Berejiklian has been pushing for a slowdown on migration to NSW, as Sydney struggles after years of under-investment in infrastructure.

“You can’t talk about pressure that comes from a rapidly growing nation without talking about the services and the infrastructure that define the quality of life and the standard of living that Australians enjoy,” Andrews told reporters in Melbourne on Monday. 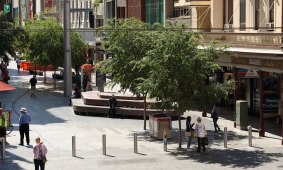 Populate or perish revisited: how to avoid a shrinking SA

Queensland and Victoria are the only two states that have not signed up to the national school reform agreement, after the majority of states and territories signed on in the past seven days.

Morrison is set to raise the issue of governments paying small businesses on time, and will seek an agreement to settle accounts within 20 days.

Queensland Premier Annastacia Palaszczuk wants to talk about euthanasia, as part of the discussion around aged care, and will again raise the issue of cyber-bullying.

With a NSW election in March and a federal poll in May, the leaders will receive a report into how to improve the cyber security of electoral systems.