The grazing family patriarch and his company Caparra were each convicted of two offences against the SA Native Vegetation Act late last week, for clearing about 100 hectares of protected native vegetation in the Hundred of McNamara region about 20km west of Keith.

Brinkworth owns more than one million hectares of land and was part of the BBHO consortium that made a $375 million bid to purchase the Kidman & Co cattle empire in 2016. Australian mining magnate Gina Rinehart and Chinese partner Shanghai CRED later outbid the consortium by increasing their offer to $386.5 million.

Brinkworth pleaded guilty to both offences against the SA Native Vegetation Act in the Environment, Resources and Development Court and was fined $60,000, while Caparra Pty Ltd, which also pleaded guilty on both counts, was fined $31,500.

The Conservation Council argues the fines represent “barely a gentle slap on the wrist” for a person of Brinkworth’s wealth and that the Government should consider means-testing penalties.

The cleared land was subject to a Heritage Agreement, meaning that Brinkworth pays no taxes or rates on it, and is prohibited from clearing it without the consent of the Environment Minister.

No such consent had been given.

Brinkworth is a significant patron of conservation projects, including as a director of public company Wetlands and Wildlife.

Through his donations, the company bought about 30,000 hectares of wetland in between the Coorong and Millicent, for conservation purposes.

Brinkworth also donated the Warraweena Conservation Park, in the Flinders Ranges, to the company – also for conservation purposes.

But in her judgment, Senior Judge Susanne Cole writes that Brinkworth’s environmental philanthropy did not offset his serial offending against the Native Vegetation Act.

“Mr Brinkworth’s antecedents (earlier behaviour) show that the conservation of native vegetation under the Act is not an aspect of conservation to which he has a strong commitment, despite it being part of the law of this state,” her judgment reads.

“His commitment to other conservation projects of his own choosing does not offset that.”

Conservation Council SA chief executive Craig Wilkins told InDaily fines for offences against the Native Vegetation Act had to be adequate in order to change behaviour.

“Clearly, the level of the fine is completely and utterly inadequate as a deterrent,” Wilkins said.

A $60K fine for Tom Brinkworth is barely a gentle slap on the wrist.

Wilkins said the Heritage Agreement that applies to the cleared land is the highest protection for private land under state law and that, “this is a textbook example of the need for law reform”.

“We should either look at a system of fines based on capacity to pay, or other ‘make good’ provisions that will make a landowner stop and think twice.

“Much bigger fines or requiring other land to be set aside for greater protection in addition to the affected area will claw back some compensation for the biodiversity loss in the area.

“Over the last 25 years, around half a million hectares of native vegetation has been lost in South Australia.”

The clearing was detected in 2015, when Environment Department monitoring officers compared an aerial image of the land, taken in early 2013, with a March 2014 satellite image of the same area.

In 2016, departmental officers inspected the land, finding native shrubs broken off at ground level, consistent with having been driven over by farming equipment.

The officers recorded at least 58 species of native vegetation. 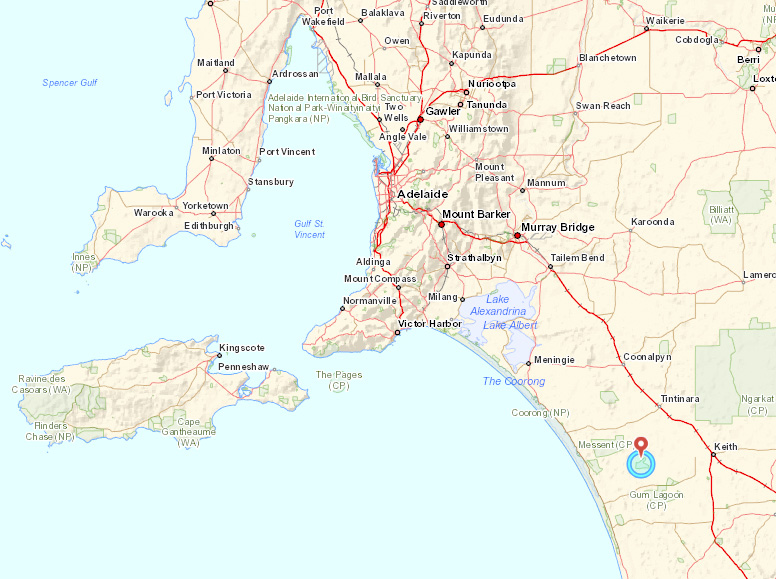 The Hundred of McNamara is located about 140km west of Keith in South Australia’s southeast. Map: SA Environment Department / NatureMaps

Crown prosecutor Alison Field noted during the case that the cleared vegetation included one rare species, and that the area was a significant wildlife habitat, featuring a high level of biodiversity.

Judge Cole found that Brinkworth was not aware of the clearing of the land until after it had occurred, and that his employees had cleared the area without his approval.

She also acknowledged that the vegetation has now largely regenerated – four-to-five years after it was cleared – and that Brinkworth has placed a register of land affected by the Heritage Agreement at his head office, which his employees have been made aware of.

Cole found that neither Brinkworth or Caparra had gained a financial benefit from clearing the land – although they benefited from its tax-free status under the Heritage Agreement.

She also found that it would have been “a simple matter to inform the employees of the terms of the Heritage Agreement”.

Caparra Pty Ltd has no prior convictions.

InDaily contacted the Environment Department and Brinkworth’s solicitors for comment.