A 30-year-old from Dallas, a 26-year-old from Campbellfield and a 21-year-old from Greenvale were arrested during dawn raids at their homes in the city’s north-west today involving more than 200 police.

The Greenvale man will face Melbourne Magistrates Court this afternoon charged with one count of acting in preparation for, or planning of, terrorist acts.

Victoria Police Chief Commissioner Graham Ashton said the trio had been under investigation since March and become “much more energised” in the past week about activating the plot quickly.

“We didn’t have a precise time and a precise location,” Ashton told reporters in Melbourne of the planned attack.

“They were looking at a place of mass gathering.

“There was a view towards a crowded place, a place where maximum people would be attending, to be able to kill, we allege, a maximum amount of people as possible.

“I believe, over more recent days, attempts have been made to source a 0.22 semi-automatic rifle to assist with the carrying out of that terrorism event.”

Ashton said the accused were using encrypted communications and police acted when they had gathered enough evidence.

All three are Australians of Turkish background and had their passports cancelled by federal agencies in January, March and October.

Two of the men have no criminal history while the third was picked up in 2007 for the minor offence of failing to display L plates.

Authorities said the men were influenced by ISIS to carry out the plot.

“If we had not acted early in preventing this attack, we will allege the consequences would have been chilling with the potential, as the commissioner stated, the potential for significant potential loss of human life,” he said. 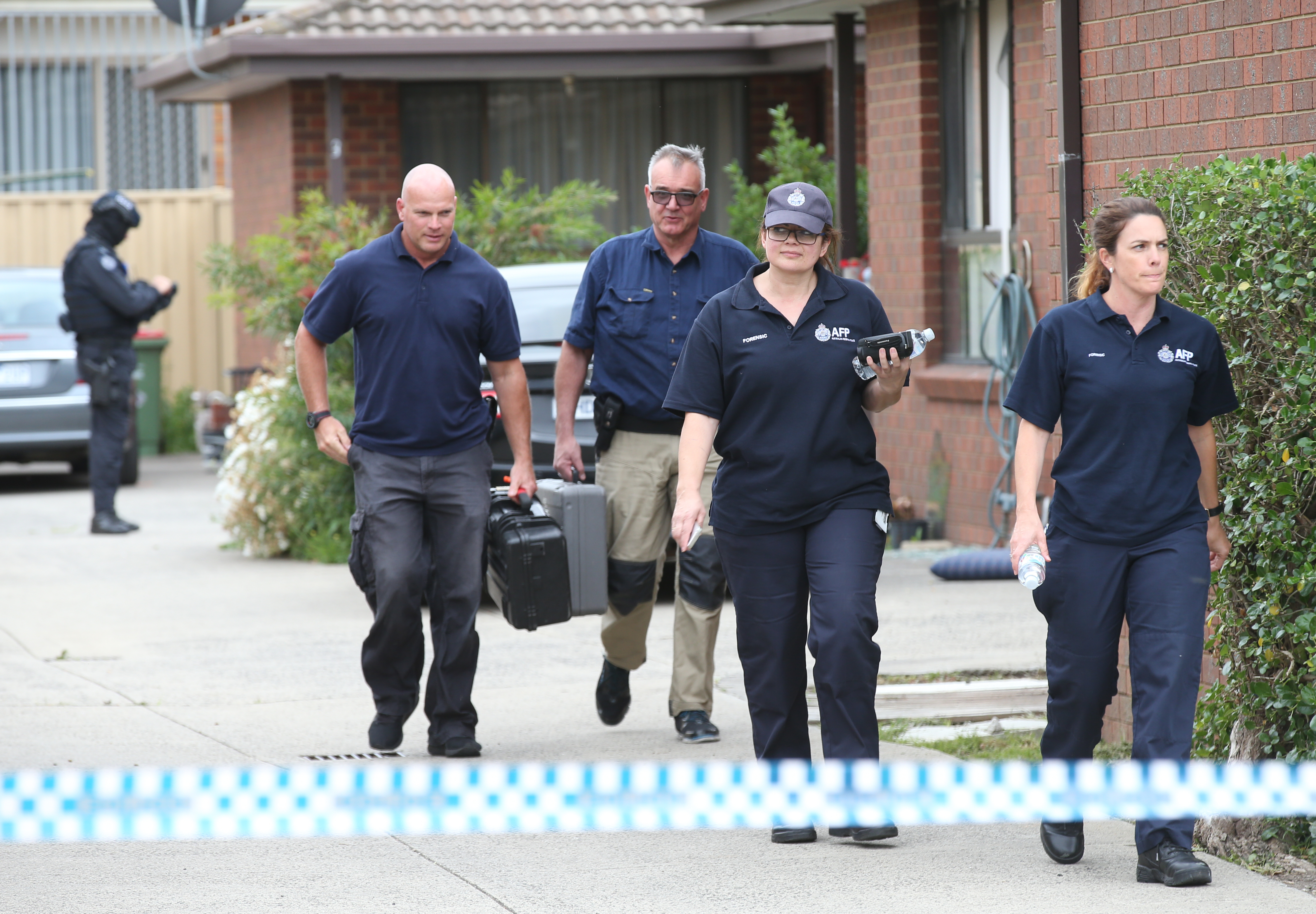 Police outside one of the houses involved in counter-terrorism raids in Melbourne. Photo: David Crosling / AAP

The arrests come as Melbourne prepared to farewell terror attack victim Sisto Malaspina in a state funeral today. He was killed and two other men were injured on November 9 when 30-year-old Hassan Khalif Shire Ali drove a burning ute into the city and launched a knife attack.

Police say the three men arrested were involved in “undertaking preparations for planning a terrorist act”.

The properties were raided under a joint counter-terrorism operation involving Victorian and Australian Federal Police and ASIO. A fourth property was raided in Coolaroo.

The operation is ongoing and the Dallas property, with a smashed front window, remained under heavy police guard.

Authorities say there is no ongoing threat.

Premier Daniel Andrews said the plot could have been “potentially deadly” had police and agencies not intervened.

“On behalf of all Victorians, I want to thank every member involved, many hundreds of officers who have put themselves in harm’s way to keep all of us safe.

“The seriousness of this potential incident should not be underestimated. We are very grateful, all of us, as Victorians for the work that has been done.”