An analysis of properties within more than 3000 suburbs across the country by property research firm RiskWise has placed Adelaide’s CBD among the highest-risk suburbs for investing.

It was the only South Australian postcode in the top 10 riskiest areas, according to the analysis.

RiskWise CEO Doran Peleg told InDaily the suburb of Adelaide, postcode 5000 – which contains the CBD, bordered by the parklands and the River Torrens – was a poor choice for interstate investors because the market is already in oversupply and the problem is likely to get worse.

He said that more than 2300 apartments were due to be built in the area over the next two years, representing a 26 per cent increase in supply.

He argued that a variety of factors on top of the oversupply combined to make Adelaide’s CBD a poor option for apartment investors, including:

“Adelaide 5000 doesn’t fall under the category of best … thing that (investors) can do with their half a million dollars,” said Peleg.

“(There is) absolutely an oversupply.

“I don’t see a correction (coming) … I just see a continued weakness in the unit market.”

The Property Council’s latest confidence survey revealed that South Australia’s residential property sector recorded an increase in residential capital growth expectations, and was the only jurisdiction in the country to do so.

“We know that demand could be stronger and that supply is steady, which paints the picture of South Australia’s economy at present,” he said.

“Developers are already fighting an uphill battle with the discontinuation of stamp duty concessions, the imposition of a punitive foreign investor tax and a sluggish rate of population growth. 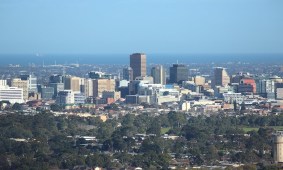 Expect losses if you buy an apartment in Adelaide: property expert

“It’s no secret that there’s a lot of policy work to do in South Australia to ensure the economy is resilient and future-proofed, especially in a post-manufacturing jobs environment.”

He added that South Australia is “a beautiful place to live, study, and raise a family”.

“What we need to do is build an investment environment that catalyses activity, but that takes time and it requires a long-term strategic plan.

“Victoria grows by more people every 27 days than South Australia grows across the entire year, which means more work needs to be done to build a resilient level of people – and economic – demand coming into our state.”