Shadow Treasurer Stephen Mullighan put questions on notice to Premier Steven Marshall and Treasurer Rob Lucas in July, asking which lobbyists listed on the state’s register had been in contact with them or their staff, and which had engaged in face-to-face meetings, who they were representing and on what issue.

In both cases, the answer referred the Opposition to the Lobbyists’ Register.

“The responsibility for reporting this information rests with lobbyists registered under the Lobbyists Act 2015,” the response said.

“The information is reported by lobbyists annually as required by Section 8 of the Act and published on Department of the Premier and Cabinet’s website.”

However, the Act, introduced by the former Labor Government, only requires lobbyists to lodge such a disclosure return “not later than 30 days after the end of a calendar year” – prompting Mullighan to call for a stricter reporting regime.

“Given the Premier’s refusal to disclose which lobbyists he’s met with and about what issues, the parliament may need to consider changes to the lobbyists’ disclosure regime – including perhaps a more frequent disclosure process, rather than annual,” he told InDaily.

He said the reporting shortcomings in the Act – introduced only three years ago – had become evident given a “unique set of circumstances” since the election.

“The key difference is that for the first time since the Lobbyists’ Act has been in force we’ve got a different government with different priorities, who have released both their first state budget and a new legislative program – and we’ve got no idea at all who’s met with the two most influential figures in determining the state budget in that regime,” he said.

“Now that we’ve seen how the disclosure regime operates in an election year, and in these sorts of situations where we’ve had a change of government – and a government with different priorities – there needs to be a change in the disclosure regime… particularly given the mandatory reporting occurs around the end of calendar year, rather than a financial year, and only occurs once a year.

“As a matter of public interest we should know who the Premier is meeting with and what he’s being lobbied about.”

But Marshall said it was “laughable” for Labor to accuse his Government of a lack of transparency, particularly in answering questions on notice.

“We were very critical of the previous government, which would leave questions on notice, thousands of them, for years,” he said today.

Marshall set his Government a target of answering questions on notice within 30 days, and said “my understanding from my most recent briefing is that we are 90 to 95 per cent on time”.

“There are always some that are skipped, but we endeavour to get all those answers back,” he said.

Asked about his contact with lobbyists, he said: “I can have a look at that question.”

“I’m happy to have a look at that issue, but I make it very clear we’re not trying to avoid scrutiny like the previous government did,” he said.

“It was their default position to cover up [and] push problems under the carpet – by contrast, I think we are significantly more open and transparent than the previous government.” 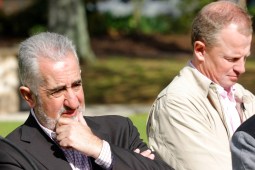 He said he would consider amending the reporting requirements in the Lobbyists Act, saying: “If there are elements of the legislation that need to be amended we can take a look at that.”

Lucas pointed out that almost exactly the same question on notice about lobbyists from the former Liberal Opposition to the then-Labor Government received no answer at all:

The Marshall Government has already moved towards tightening the Lobbyists Act with a ban on lobbyists holding official roles in political parties and associated entities.