Attorney-General Vickie Chapman announced today that the Government had decided to extend the declared public precinct – which is bordered by North Terrace, Currie Street and West Terrace – following “demonstrable evidence” that she said proved anti-social and disorderly behaviour was on the decline in the area.

Under the declaration, Police will continue to be able to treat people within the area in a similar way to patrons at a licensed venue from 6pm to 6am overnight on Fridays and Saturdays.

The zoning, which came into force under the former Labor Government in November last year, grants police the right to conduct metal detector searches of individuals, ban a person from the area during specified hours, direct a person to move on, and remove children from the area where a police officer deems they are “in circumstances that place them at risk.”

Police will continue to be able to fine people up to $1250 for behaving in a “disorderly or offensive manner within a declared public precinct.” 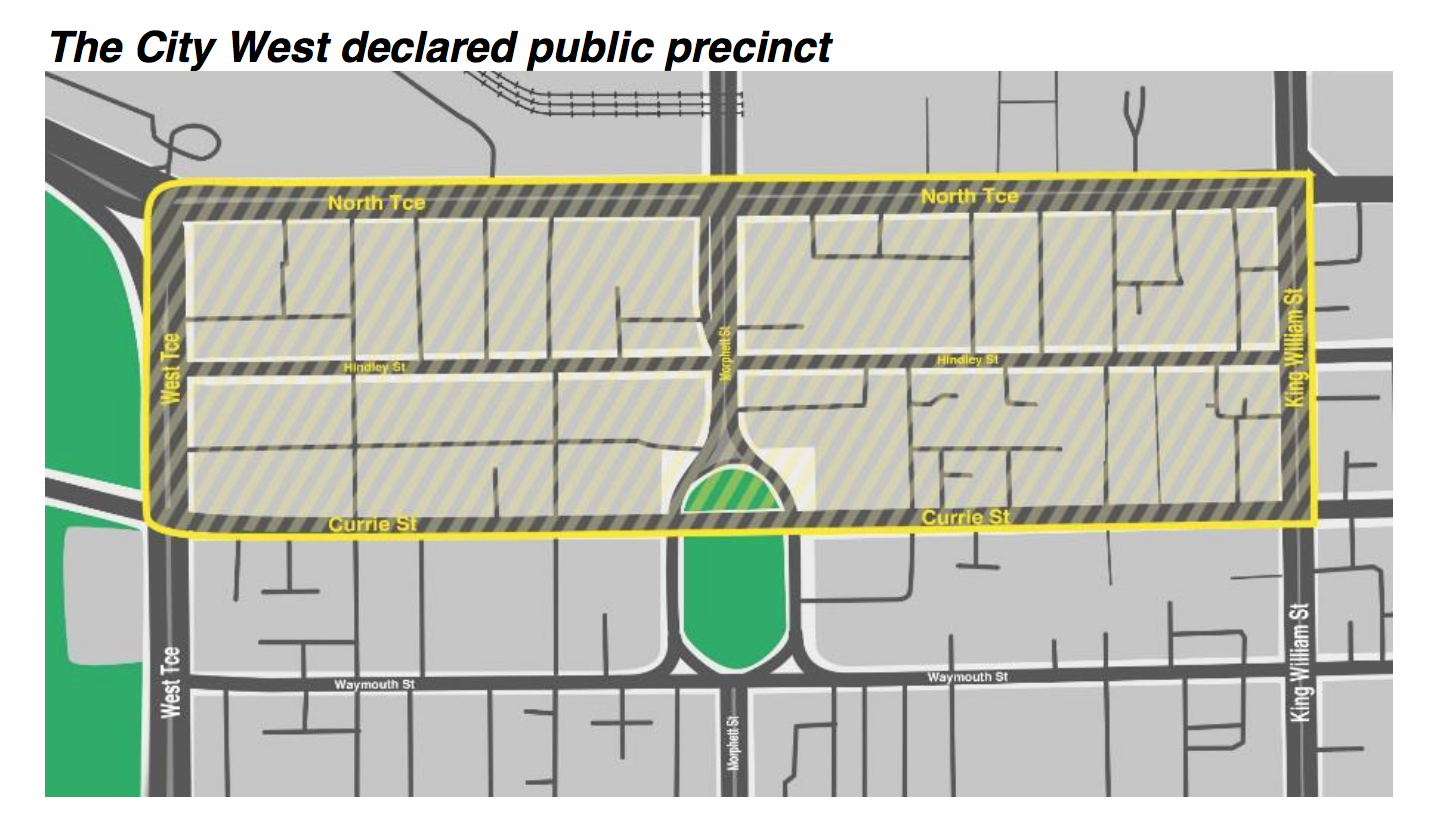 The Police will continue to operate in the above section of the city overnight on Fridays and Saturdays. Source: State Government

Addressing the media today, Chapman said the legislation had been effective at protecting people’s safety.

“We consider the removal of minors from the area, the extra police powers that are granted in this precinct to enable the taking of weapons and to be able to undertake searches, has been demonstrably effective,” she said.

“When you have nearly 60 children who are removed in the last precinct… you have a situation where those children, who are clearly vulnerable just by their age, are protected.

“We want to make sure they’re not caught up in any fray or criminal conduct themselves.”

Assistant Police Commissioner Paul Dickson welcomed the extension, telling reporters Hindley Street and its surrounds were “a lot safer” today than they were a year ago.

He said SA Police had reported almost a five per cent reduction in the number of offences including robberies and serious assaults on individuals.

Dickson added Police had, to date, issued more than 230 expiation notices for disorderly conduct and removed nearly 60 minors from the area while it had been declared a public precinct.

“What I think is the great outcome is I’m getting reports from my officers that there are far less people when they speak to people in the Hindley Street area, finding weapons,” he said.

“There’s over 700 searches of people and around 16 weapons that have been located as a consequence of those searches.

“I really trust my officers when they say anecdotally that the street is safer today because there are less weapons on the street than there was at the start.”

Adelaide West End Traders Association have welcomed the extension, with vice-president Andrew Wallace telling reporters this morning he would support a permanent public precinct zoning of the area.

“I think it’s enabled new traders to be able to come into the precinct, which is a really good thing and it’s just a whole lot safer place to be,” he said.

“Sure there are still incidences that are happening from time to time but the statistics show that this is trending down in really the right way.”

But news of the extension has left the Youth Affairs Council of SA concerned about the potential for young people to continue to be unfairly targeted.

YACSA CEO Anne Bainbridge, who raised concern about the legislation when it was tabled last year, said young people were already bearing the brunt of increased regulation, suspicion and surveillance when they used public spaces.

“In addition, we don’t have any information about the success of the current West End Declared Public Precinct and remain concerned about the disproportionate impact this policy could have on young people.”

Bainbridge said her organisation would not support any policy that had the potential to disproportionately affect young people.

“YACSA believes that young people have the right to access public space in South Australia,” she said.

Greens MLC Mark Parnell has called for an audit of public precinct zoning to determine its effectiveness at curbing anti-social behaviour in the city’s West End.

He questioned the Assistant Police Commissioner’s statistics, saying South Australia was already experiencing a statewide decline in crime and that the reduction in the number of offences along Hindley Street could be accounted for this general trend.

“I would be asking for a lot more information – decent evidence – to make sure these statistics aren’t overreached,” he said.

“I would also like to know who these people that they’re moving on are.

“When you go back to some of the original submissions from groups such as the Law Society, Aboriginal Legal Rights Movement and the Youth Affairs Council, they were saying that there for some homeless kids living on the street it could be very dangerous and inappropriate to get them to move on and send them home for a variety of reasons.

“We opposed it then and we will continue to oppose it.”

InDaily has asked Aboriginal Legal Rights Movement and the Law Society of SA for comment.