Career bureaucrat Sandy Pitcher, who was deputy CEO in the Premier’s department before taking the reins at Environment, Water and Natural Resources (now known more simply as the Department of Environment and Water), this week started a consultancy role with SA-based OZ Minerals.

Pitcher – who recently joined the board of Solar Citizens and remains chair of Adelaide’s University’s Environment Institute – has been consulting with Deloitte since March, but confirmed the new role, as a consultant in strategy, government and environment.

She described it as a “real job” as well as a profound cultural change.

OZ Minerals was lured to set up its headquarters in Adelaide with a $10 million sweetener from the former Labor Government.

It operates significant copper-gold mines at Carrapateena in the state’s far north and Prominent Hill, south of Coober Pedy, but has also expanded its scope with significant interests in Brazil.

“Essentially they’re growing so much and becoming a global company now,” Pitcher said.

“They’ve gone from being really just Prominent Hill and Carrapateena to a company with assets all over the world.”

She said she spent time with CEO Andrew Cole in her previous government role and he “really seems to be the real deal” in terms of overseeing, as its slogan suggests, “a modern mining company” that “does things differently”.

“They want to be a mining company that cares about the environment… they have a leadership team that has asked me to challenge them to think of things differently,” she said.

She said the company’s recent move to a converted warehouse in Adelaide Airport’s business district also made her feel at home, with the new digs boasting a similar workplace design – replete with “pot plants, open plan and open space” – that she introduced into the environment department offices during her tenure.

For Pitcher, the added relief is finding a role that enabled her to remain in SA.

“There are not many ASX companies in Adelaide – we’re not overrun with head offices here.”

She said she’d had “opportunities interstate” but “we’re such a small corporate sector here”.

“So it’s a relief to find myself with a company that feels like we share values, more than I’d expected when I started,” she said.

Pitcher was one of four public service bosses sacked by the incoming Marshall Government within days of its election in March, along with Premier’s Department supremo Don Russell, Attorney-General’s Department chief Ingrid Haythorpe and Planning, Transport and Infrastructure boss Michael Deegan – who is yet to be permanently replaced.

Pitcher is loath to dwell on the decision – which cost taxpayers a combined payout of $1.7 million – but concedes it came out of the blue for her.

“I think most people still think it was a bit of a surprise – that’s been reassuring,” she said.

“All the people I’ve talked to, the general thing [I’ve heard] is my reputation is good, there’s not a sense I was removed on poor performance.

Premier’s Department deputy CE Tahnya Donaghy’s contract was terminated in the days that followed, along with DPC executive and former Labor candidate Rik Morris, who lamented the sacking of “pretty high-performing CEOs and important senior women in the public sector who were demonstrating there’s a place at the top of the tree for women who got there on merit”. 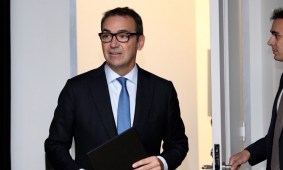 Asked about the number of women who were moved on, Pitcher said: “I don’t want to dwell on that, but it’s an interesting observation.”

“I had noted that observation, and certainly many people had commented on that to me as well.”