Those are the trade-offs for a budget that is forecast to return to surplus for the next four years after plunging into almost $400 million of deficit in 2017-18, with Lucas insisting the Liberals will not break election promises to cover the shortfall.

In a frank assessment of the state’s financial position – and the measures the Liberal Government will take to bolster it – Lucas today delivered his, and his party’s, first budget since 2001, holding fast to the Marshall mantra that “we prefer to underpromise and overdeliver”.

As such, it’s a document with few surprises, other than to tick off on election pledges and the promised budget surplus.

Even the over-arching narrative of blaming the previous Labor Government for the parlous budget position was straight from the political playbook, as Steven Marshall himself conceded when he introduced his Treasurer at a media lock-up at the Intercontinental Hotel, saying: “A lot of incoming governments point to the mess they’ve been left… but in our case it’s actually true.”

“We’re still sadly in a position of having to say ‘shock, horror – black hole’,” added Lucas.

“But we’re not using that as an excuse to break election promises.”

The intrigue was always about how this would be achieved, with Lucas ramping up state debt over the forward estimates, climbing from $6.3 billion in the current financial year to $8.7 billion by 2022.

Public sector reform remains in the Government’s sights, with a “willingness” to “outsource or commercialise where it is in the public interest to do so” – starting with the operations of the Adelaide Remand Centre, which will be outsourced to a private provider.

“We have a responsibility to consider such options where it is clearly in the public interest to do so,” Lucas said.

“Staff will have the option of transferring to other public sector prison operations if they wish to take up that option.”

In health, pathology and imaging services will be given savings benchmarks to achieve.

“If you can achieve that, terrific,” Lucas said.

“If the judgement is taken that you can’t, or won’t, then the Government is reserving the option… of outsourcing to the private sector.”

Lucas, who once took a contentious plan to axe 4000 public servants to the 2006 election, today recommitted to a similar number – but 12 years on, it is only a slight increase on that pledged by Labor late last year.

Where the midyear budget review estimated a reduction of 2047 full-time employees by June 2021, Lucas is aiming for 2286 – plus the transfer of bureaucrats delivering disability services to the non-government sector, taking the total to 4013 FTEs.

“The challenge for the new government is whether or not we’re going to be able to achieve a slightly increased number,” he said.

Ironically, then, the sales pitch focuses, as ever, on jobs – with the budget delivering key Liberal pledges on payroll and land tax relief. But the budget’s employment forecasts remain flat: growth of 1.5 per cent for 2018-19 followed by one per cent per year for the three years thereafter. And that, after stronger-than-anticipated employment growth of 2.1 per cent in 2018-19.

“We’ve significantly trailed national jobs growth for the past 10 years [and] we’re still a way behind… but yes, we accept the argument that it’s modest in terms of the out years.”

It was inevitable that after his garrulous Labor predecessor Tom Koutsantonis was last year pressed to describe his “very sexy” budget as wearing “a red dress and walking down the street”, Lucas would be asked to imagine his own economic statement in similar terms.

“I thought someone would ask this particular question,” he noted, before the more straight-laced Treasurer mused that the description was “indicative of Tom’s persona – it’s not mine”.

“If you pushed me, I would say it’s in a business suit with sensible shoes,” he eventually averred.

Conservative it may be, but the budget is not without controversy.

Lucas had already explained his philosophy that the Government would “no longer rely on a ‘salami slice’ approach” to finding agency savings – thus, instead of cutting a little off the top of each program, the budget has “axed, discontinued or de-funded” dozens at once.

These include the Independent Gambling Authority, a ‘Laptops for Students’ program, the recently-appointed Kangaroo Island Commissioner and Labor’s signature Food Parks Attraction Fund, along with the previously pledged Economic Development Board, Riverbank Authority and Fund My Neighbourhood scheme.

“You can’t just continue to do everything you’ve been doing and continue to add additional funding,” Lucas said. 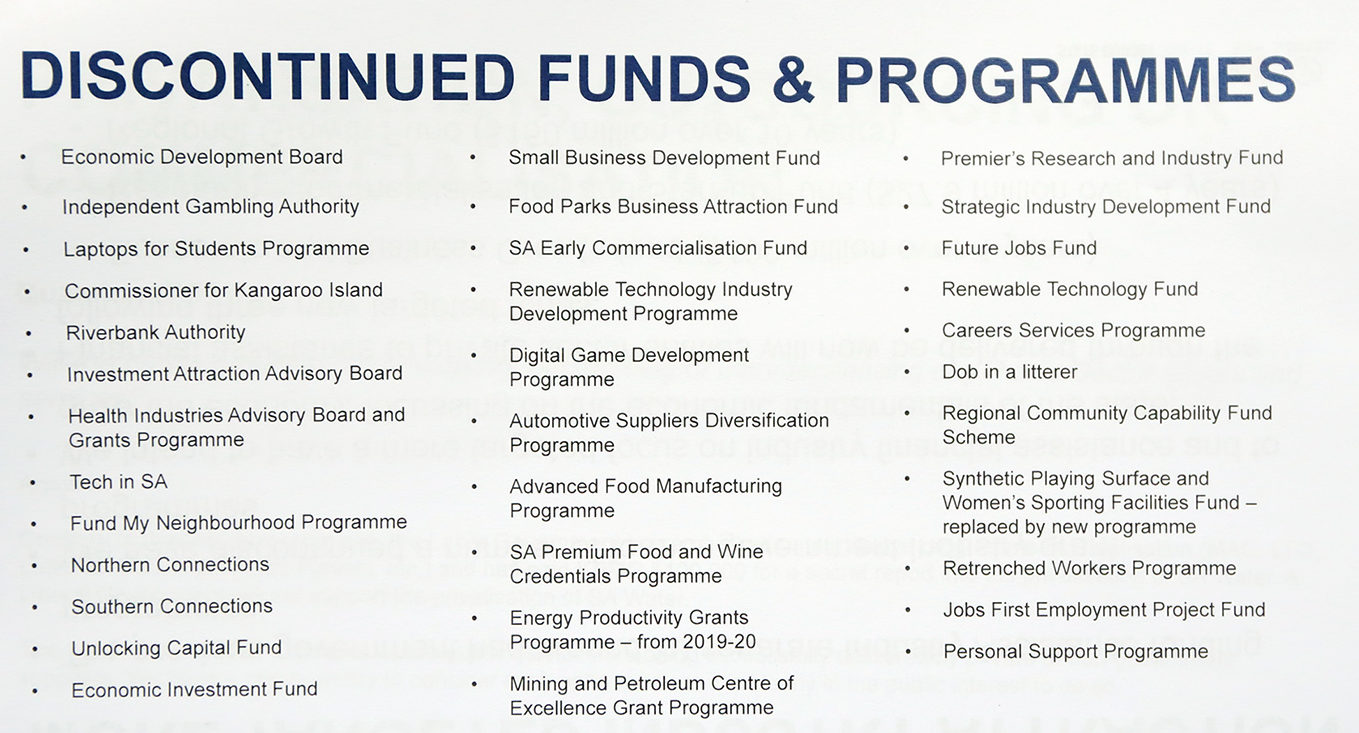 The Government seems happy to court political controversy with some of its measures, with budget savings achieved by the close of TAFE campuses with “low utilisation rates”, in Tea Tree Gully, Port Adelaide, Urrbrae, Parafield, Wudinna, Roxby Downs and Coober Pedy.

Lucas will also close three Service SA centres, in Mitcham, Prospect and Modbury, and axe a range of “low patronage bus services routes” – the specifics of which are yet to be announced.

The Government also risks incurring the wrath of housing trust tenants, with rents to increase by up to $10 per week.

Outrageous! @SALibMedia sinking the boots into SA Housing Trust tenants by increasing their rent by $10 a week while looking after its AHA mates by defunding the Independent Gaming Authority. @marshall_steven and @Rob_Lucas – you should be ashamed of yourselves! #saparli

The government coffers will also be bolstered by increasing liquor licensing fees – to be particularly felt by major late-night venues – a measure Lucas says was “informed by recommendations contained in the Anderson review into liquor regulation”. He also flagged increased cost recovery by the Environment Protection Authority for licensing facilities with underground petroleum storage systems and providing support for businesses for environmental regulations and community response.

As previously hinted, the role of Arts SA will be “refocussed” to “one of provision of policy advice to government”. 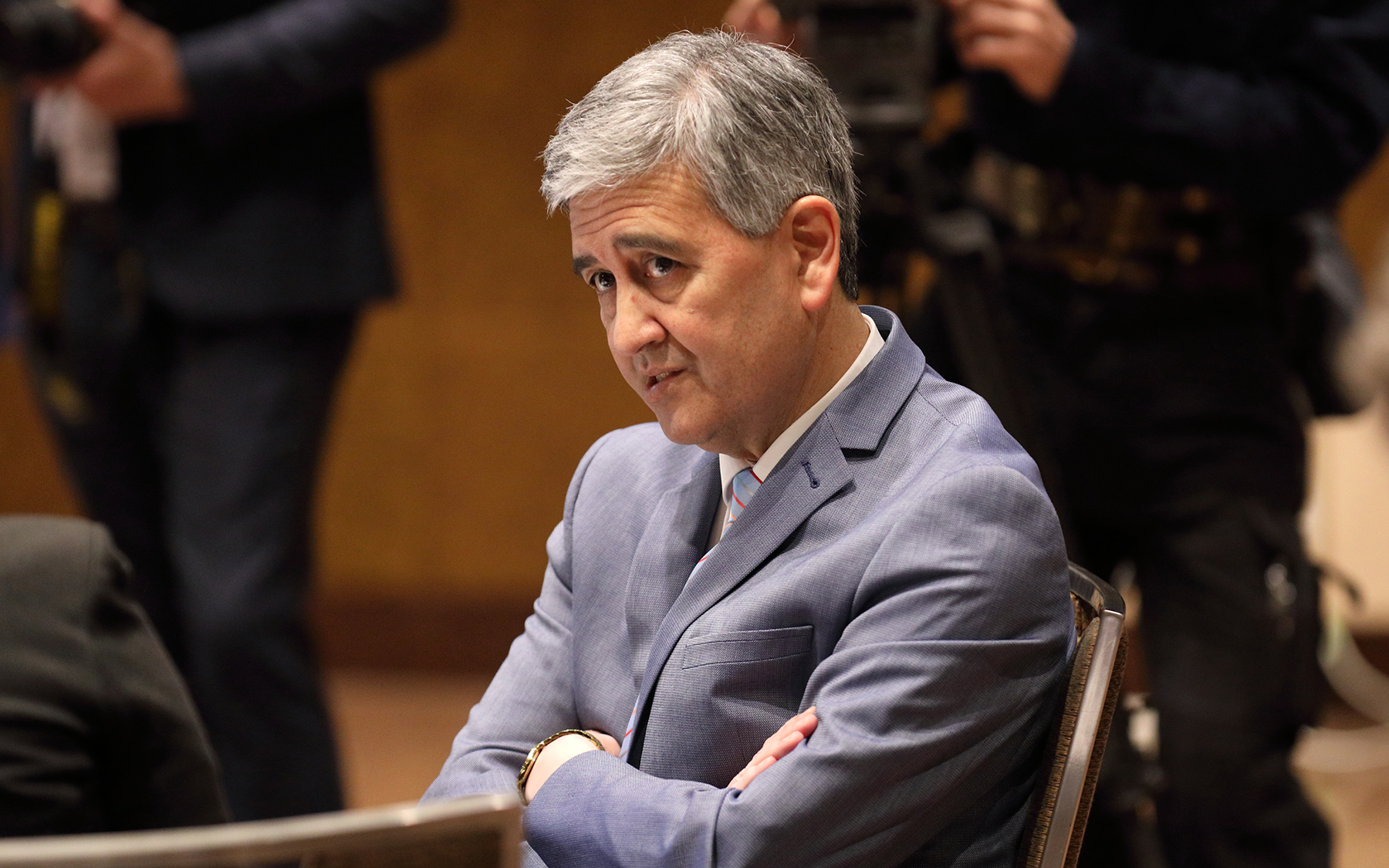 Lucas is also tempting the ire of one of the state’s more influential lobby groups, seeking to increase fees for salaried medical officers who operate private practices within public hospitals.

“In South Australia, for Rights of Private Practice entitlements, clinicians pay the health system an administration fee of 9 per cent of private income, whereas in Queensland and Western Australia the fee is up to 68 per cent – and in New South Wales it is up to 90 per cent.

“The government will initiate a review as a priority and seek a more reasonable contribution to the costs of use of public health facilities to generate this private income.”

Asked whether he expected blowback from the sector, he responded: “Why do the taxpayers of SA have to subsidise [their] income to that particular extent when it doesn’t occur in other jurisdictions?”

“I accept there will be strong and trenchant criticism,” he conceded, “but if we’re going to stop a health system haemorrhaging I’m saying to SASMOA there is something we can do about it, which is fairly getting some sort of return for their right to earn significant additional income from taxpayer-funded public hospitals.”

Lucas says he is addressing the main areas of budget blowout by effectively forgiving SA Health $800 million of savings over five years, as well as throwing an extra $109 million at TAFE SA and $30.9 million to meet additional costs for children in state care.

“We’ve made a series of revisions to what are clearly unacceptably high and unachievable savings task for health [but] there’ll still be a significant savings task that health will have to achieve,” he said.

But he is determined to rein in the underperforming Central Adelaide Local Health Network, warning “the Government has no option but to take immediate corrective action for what is a culture of overspending and lack of management expertise”.

“We need to correct a situation which is haemorrhaging taxpayers’ money, and a culture of not being overly concerned about that happening on a regular basis,” he said.

On the spending side, Lucas says by 2022 the Liberals will have committed to “the largest single investment by a state government in the state’s history in education and schools”, including previously-announced new campuses and the transition of year seven into high school.

“The brutal reality is when Naplan tests show we’re lowest or second lowest [and] not a single SA-based university is in the top 100 in the world, it’s hard to argue we have a world-class education system to attract investment, people and jobs and economic opportunities,” said Lucas – a former education minister.

“This government’s committed to put a massive investment in the medium future for massive long-term benefit, and all of those commitments are fully funded.”

Lucas decried previous Labor budget surpluses he claims were in effect “structural deficits… which have been masked by sugar hits” from the selloff of the Motor Accident Commission.

“Contrary to the claims of Messrs Malinauskas, Koutsantonis, Mullighan et al, that’s the true state of the books that the Government has been left with,” he said.

But ‘messrs Malinauskas, Koutsantonis, Mullighan et al’ were quick to hit back, the Opposition Leader railing against “the Marshall Liberal Government’s cruel cuts, closures and privatisations”.

“We were promised a government which would deliver more jobs, better services and lower costs – instead the Liberals are cutting jobs, cutting services and increasing costs.”

Shadow Treasurer Stephen Mullighan reiterated the claim that “the Liberals inherited a budget in surplus, a growing economy and falling unemployment rate”.

“In their first budget, the Liberals have plunged the budget into deficit and unleashed cruel cuts, closures and privatisations,” he said.

“There are no excuses for these cuts, with the Liberals set to receive an extra $1 billion in GST cash over the forward estimates.”