Abbott is concerned the Turnbull government’s signature energy policy will lock in a binding carbon emission reduction target when he had only agreed to on a “non-binding, non-mandatory” basis through the Paris Agreement.

“There’s a world of difference between a non-binding target and a mandatory legislative commitment. That’s why I think this is a very, very dangerous move which is being proposed,” Abbott told 2GB radio today.

“I have enormous concerns about anything that smacks of our country being dictated to, surrendering our sovereignty really, to the green bureaucrats of Paris.”

Abbott is also demanding the government compulsorily acquire the Liddell power station in NSW to guarantee electricity supply beyond 2022.

He and former deputy prime minister Barnaby Joyce are among a small number of Coalition members threatening to cross the floor and vote against the policy.

“Obviously it’s not a good look and so I hope Tony Abbott will be able to sit down with Josh Frydenberg, discuss his concerns, and that we can actually have a united position,” Tudge told the ABC.

Joyce wants the guarantee to include promises to hit power companies which lift energy prices for households.

“What do we say to them if the power prices don’t go down?” he asked reporters in Canberra.

Joyce reserved the right to vote against government policy, but said he would listen “diligently” to the energy minister before making a decision.

Prime Minister Malcolm Turnbull is offering to underwrite billions of dollars in investment on new coal and gas power plants as he looks to shore up colleagues’ support.

Turnbull will announce his support for the Australian Competition and Consumer Commission proposal at a coalition party room meeting on Tuesday.

Under the ACCC plan, the government would underwrite new power generation whether that be from coal, gas or renewables. 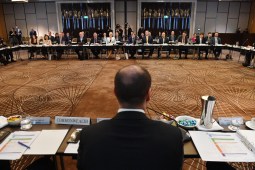 Finance Minister Mathias Cormann confirmed the government was “accelerating consideration” of the ACCC proposal, which he said would not favour one power technology over another.

But senior Labor MP Tony Burke said it would be extraordinary for the prime minister to underwrite new coal-fired power stations.

“Malcolm Turnbull wants to again use our money, taxpayer money, to fund something that’s not about the future,” Burke told the ABC.

“If no one else in Australia is willing to invest in new coal-fired power stations, why is Malcolm Turnbull willing to do it with taxpayer money?”